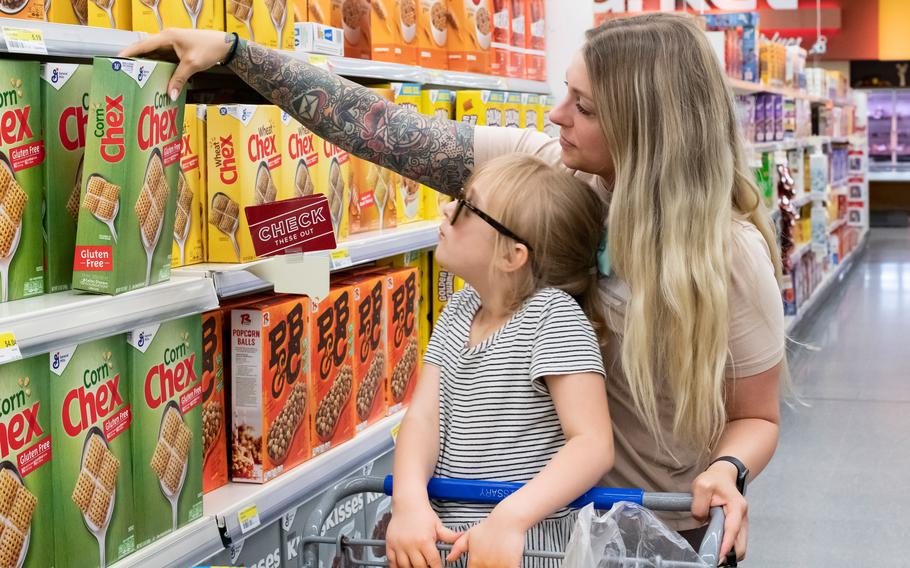 Meghan Giguere, a Kaiserslautern Military Community resident whose husband is in the Air Force, shops for groceries with her daughter at Ramstein Air Base on May 23, 2022. (Phillip Walter Wellman/Stars and Stripes)

KAISERSLAUTERN, Germany — Service members and their families in the largest U.S. military community overseas are criticizing a Pentagon decision to drastically cut their take-home pay based partially on data collected before inflation spiraled to its present heights.

The cost of living allowance for the Kaiserslautern Military Community, which includes large Army and Air Force populations, is set to drop by 10 index points starting June 1, meaning many service members and Defense Department civilians will receive hundreds of dollars less each month.

That contrasts sharply with the revisions in some nearby areas with comparably high costs of living. Stuttgart and Spangdahlem, for example, will see a decrease of only 4 points.

In Wiesbaden, about an hour away from some Kaiserslautern-area bases, service members will see their COLAs go up four points.

Personnel at KMC bases, which include Ramstein Air Base and much of U.S. Army Garrison Rheinland-Pfalz, had been receiving more in COLA than some of those other areas in Germany.

Kala Andree, who moved to the KMC with her active-duty husband and their 1-year-old child earlier this year after quitting her job in the U.S., said the decrease will be particularly challenging for the families of lower-ranking personnel.

“For us, it is a huge struggle already,” said Andree, whose husband is an airman 1st class. “We went from being a two-income family making almost $8,000 a month to bringing in $2,500, and now we are going to be sitting even lower.”

In a bid to ease the impact, the Pentagon decided to limit COLA reductions in all locations to 2 points per month until the full amounts are reached, Maj. Charlie Dietz, a spokesman for the Office of the Secretary of Defense, told Stars and Stripes on Monday.

That means for military residents in the area, the full 10-point drop won’t be felt until October.

But many of them say the reduction is out of touch with reality and couldn’t come at a worse time.

“This decrease is an added stress that nobody needs,” DOD civilian employee Erika Robinson said.

Robinson, who is married to an active-duty airman and lives near Ramstein, said the cuts mean they’ll have considerably less money to commute to work and pay for day care.

“I’m contemplating whether or not it’s worth it for me to keep working,” she said. “It’s upsetting. It affects the mission for sure.” Army Sgt. 1st Class Joshua Mero loads groceries into his car at Ramstein Air Base on May 23, 2022. (Phillip Walter Wellman/Stars and Stripes)

COLA added to paychecks is determined by rank, years of service and number of dependents, so payments vary significantly.

For example, an E-5 in the KMC with eight years of experience and two dependents earns an additional $305.60 in COLA for the current two-week pay period. That will drop to $203.73 once the full reduction takes effect.

With tens of thousands of Americans living in and around Kaiserslautern, the heft the military community’s shopping behavior has on the local economy is a major reason for the COLA drop, said Lt. Col. Micah Neece, commander of the 86th Comptroller Squadron at Ramstein Air Base.

“There are no places in Germany that are affected by Americans’ presence like Kaiserslautern,” Neece said. “And during COVID, Americans stopped going off base, so that fundamentally changes supply and demand.”

The allowance is meant to equalize purchasing power so DOD employees can buy the same amount of goods and services abroad as they would be able to buy with the same salary in the United States.

According to a November 2021 survey, consumer goods in the KMC were determined to be 12% more expensive than in the U.S., down from the 22% recorded before the COVID-19 pandemic.

But since that survey, prices have gone up in Germany at levels last seen 41 years ago, in the former West Germany, national statistics agency Destatis said in April.

The aggregate price of goods in the country in March was more than 12% higher than it was at the same time a year ago, data from the Federal Statistical Office shows.

Neece shares the belief of KMC residents who think that because of the enormous economic upheavals in the months since the survey data was collected, this isn’t the time to be decreasing paychecks.

The 86th Comptroller Squadron has sent those concerns up the chain of command.

“We think some kind of delay or alteration should be considered,” Neece said. “Because to say that the economic circumstances that we find ourselves in now are normal is probably not accurate.”

As a result of the pandemic, prices on many goods already were rising prior to Feb. 24, when Russia launched a full-scale invasion of Ukraine. But the ongoing war worsened the inflationary woes. 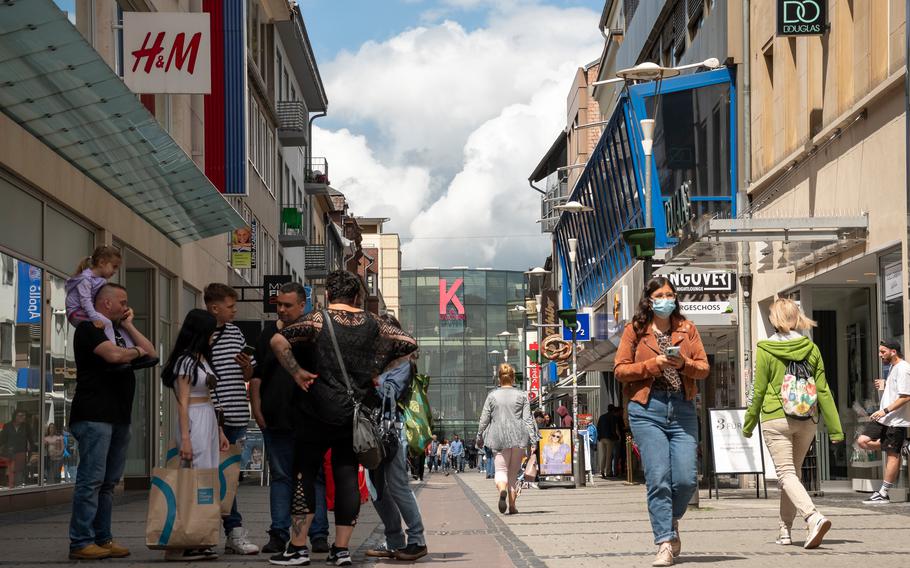 Fackelstrasse, one of the main shopping streets in downtown Kaiserslautern, on Tuesday, May 24, 2022. (Phillip Walter Wellman/Stars and Stripes)

The COLA calculations for the Kaiserslautern area were based partly on two surveys from 2021, U.S. Army Europe and Africa said.

In October of that year, service members and spouses completed the Living Pattern Survey, which is done every three years and asks participants to name the places where they shop.

In the KMC, only 17% of eligible respondents took part in that poll. That was actually double the participation seen in 2018. The Defense Department said it considers the 17% rate a good response that accurately reflects shopping patterns.

The following month, a team of three soldiers and an airman under USAREUR-AF verified prices at locations identified in the Living Pattern Survey.

Their price check inventory included about 150 goods and services, such as groceries, clothes, vehicles and child care.

Their evaluation, known as the Retail Price Schedule, is conducted annually and sent to the Office of the Secretary of Defense, which compares the costs with averages in the U.S. that are determined by the Bureau of Labor and Statistics.

In addition to this annual calculation, currency fluctuations are monitored and can affect COLA rates incrementally.

The COLA decrease does not cover utilities and therefore does not affect the housing allowances. The same factors driving the overall inflation are having pronounced effects on energy costs in Germany.

People who want to crunch the numbers to see how much their pay will change can use the DOD online calculator. The COLA index code for the Kaiserslautern Military Community is 112.