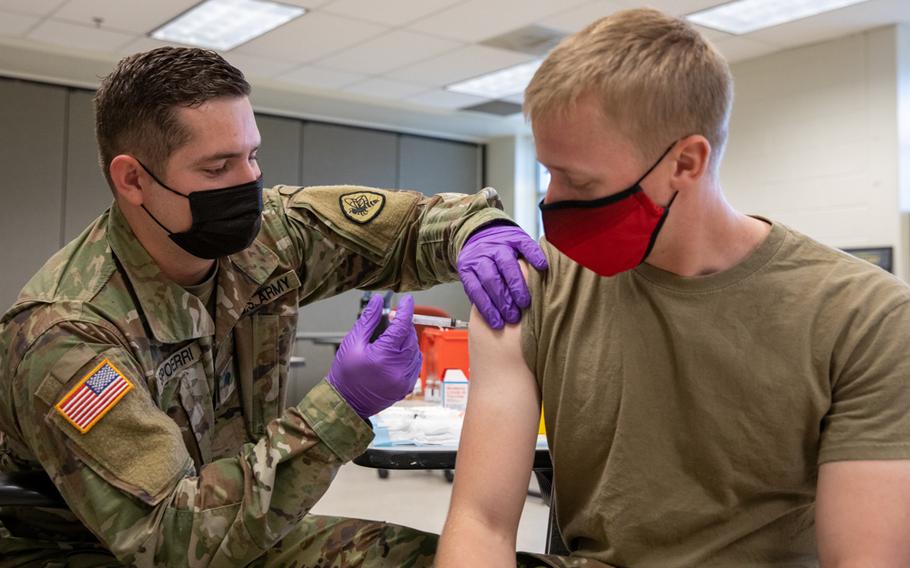 WASHINGTON — Nearly 40,000 troops in the Army National Guard were still unvaccinated against the coronavirus as the deadline passed for them to receive the shots or face being discharged from the service as mandated by the Defense Department.

About 88.2% of the total National Guard force was fully vaccinated as of Monday, with another 0.7% having had at least one dose of the vaccine, according to the service.

However, there could be some Guard members who have received their shots but not yet submitted their proof of vaccination, Guard spokeswoman Nahaku McFadden said Thursday.

“Soldiers and airmen are still providing civilian documentation to be entered into their electronic health record, so the numbers may be higher than what we are currently seeing in the military system,” McFadden said.

The Air Force has issued 214 medical exemptions and 869 administrative exemptions to the vaccine mandate for Air National Guard members, according to the service. Those service members are not included in the unvaccinated count.

The Army National Guard had the latest deadline of all the services by several months. Deadlines for active-duty service members passed Nov. 2 for the Air Force and Space Force, Nov. 28 for the Navy and Marine Corps, and Dec. 15 for the Army.

The Army, which is responsible for determining how to deal with the Guard troops who have not been vaccinated, is expected to release information about its plans Friday.

“We’re going to give every soldier every opportunity to get vaccinated and continue their military career,” Lt. Gen. Jon Jensen, director of the Army Guard, said in a statement Thursday. “We’re not giving up on anybody until the separation paperwork is signed and completed.”

The active-duty Army began separations in March, about three months after the service deadline to get vaccinated. Since then, 1,037 soldiers have been separated, 3.464 reprimands have been issued, and 3,228 temporary and permanent exemptions have been granted.

The Air Force had separated 672 active-duty airmen for refusing the vaccine as of Monday, according to the service. No data was available on how many Air Force National Guard or Reserve members had been separated to date.

The federal government will not pay unvaccinated Guard members starting Friday, the Pentagon has said. That means they won’t be paid when activated under federal status, which includes monthly drill weekends. Unvaccinated Guard members will also not be allowed to participate in federal missions, such as certain assignments to the U.S.-Mexico border.

However, troops might be eligible for pay while performing duties under their state assignments, depending on the state. The governors of Oklahoma, Texas, Wyoming, Alaska, Iowa, Mississippi and Nebraska have formally asked the Pentagon not to enforce the mandate for Guard members, with some of them filing lawsuits.

Last week, District Judge J. Campbell Barker in the Eastern District of Texas decided not to issue a preliminary injunction that would have delayed the mandate’s enforcement for Texas National Guard members until an ongoing lawsuit between the state of Texas and the federal government is settled.

The court’s decision means Guard members in Texas must still meet the federal deadline to be eligible for federal pay, though the lawsuit is ongoing.

That lawsuit, filed by Texas Gov. Greg Abbott, argues the federal government should not be able to override the decisions of the governor, who declined to order Texas National Guard members to receive the vaccine while under state duty status.

“Because plaintiffs have not shown a substantial likelihood of success on the merits of their claims, the court need not consider the other requirements to obtain a preliminary injunction,” Barker wrote in his decision issued June 24.

The same happened when Oklahoma Gov. Kevin Stitt filed a similar lawsuit in November, and an Oklahoma District Judge denied their request for a preliminary injunction the following month.