Chattanooga Times Free Press • June 30, 2022
This story has been corrected. 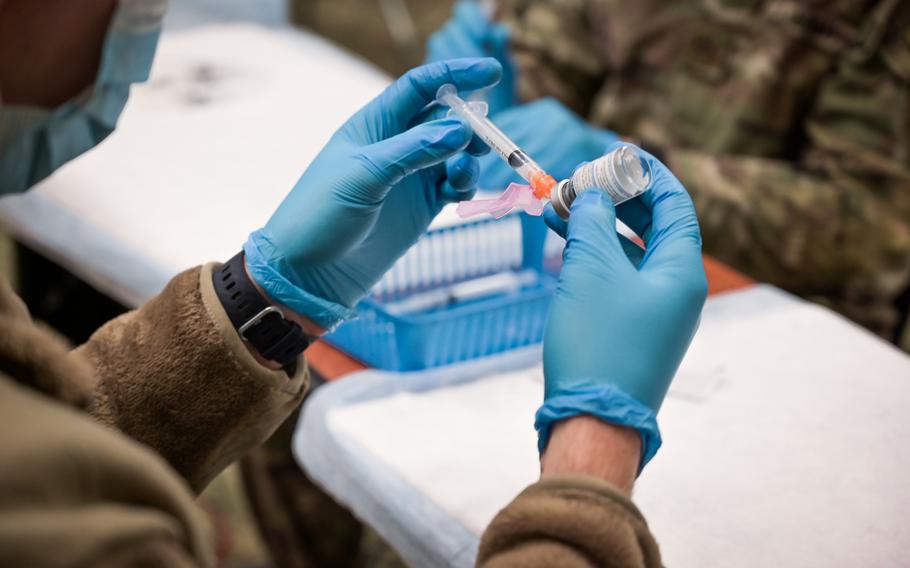 NASHVILLE, Tenn. (Tribune News Service) — A group of Tennessee National Guard members, who face being forced out of the service by the U.S. Department of Defense on Thursday over their refusal to get mandated COVID-19 vaccines, along with their supporters pleaded publicly with Gov. Bill Lee on Wednesday to take actions, including suing the federal government if necessary, to prevent their dismissal.

“On June 30, hundreds of your Tennessee National Guard soldiers — under an illegal, improper order by the Biden administration’s Department of Defense in defiance of natural law and the United States Constitution — are scheduled to be dismissed from service due to refusal to accept a COVID-19 vaccination,” read a petition presented to the state Capitol office of Lee by several dozen Guard members, their families and friends.

“It is your duty before God and the citizens of the great state of Tennessee, sir, to help these men and women. Please stop them from being fired, sir!” the petition tells Lee, a Republican.

The governor was not in the office to accept the petition.

Mickey Shelton, a Tennessee National Guard captain from Grainger County who is a member of the 230th Sustainment Brigade out of Chattanooga, helped lead the effort. Several Republican lawmakers voiced support for the guard members as well.

Standing outside the governor’s office suite, Shelton told the Chattanooga Times Free Press he had been unsuccessfully trying to meet with Lee.

“They’ve ignored and they’ve ignored and diverted and tried to avoid whether it’s an event we invited them to or whatever it may be,” said Shelton, who along with comrades and other supporters rallied earlier on Legislative Plaza before the state Capitol. “So they’ve avoided us like a plague.”

He said he had been in back-and-forth conversations with Lee Chief of Staff Joseph Williams to set up a meeting, but it had not come through by Wednesday.

Rep. Jerry Sexton, R- Bean Station, was among a group of Republican lawmakers joining the protesters on Legislative Plaza for their rally. He later accompanied them into the Capitol to Lee’s offices.

“We’re here to stand with the Tennessee National Guard to support them and their effort to not take the vaccine and to encourage our governor and attorney general to do all that they can do, whatever they can to push back against this,” Sexton told the Times Free Press. “They don’t need to lose their jobs. And we don’t need to lose them, you know, in our defense.”

“The COVID-19 vaccine mandate is a Department of Defense requirement,” the statement said. “But we have approved every personal and religious exemption brought forward by members of the Guard.

“We have also advocated to the DoD that personnel who sought an exemption should receive that same exemption federally, and we are awaiting their response. In the meantime, we have no plans to terminate or dishonorably discharge personnel.”

Shelton said he personally objects to the COVID-19 vaccines because, he added, human tissue from aborted fetuses were used to develop or make the vaccines.

The group’s requests to Lee include:

— Publicly condemning firings of Tennessee National Guard members who are scheduled to be terminated due to their refusal of the COVID-19 vaccine. They also want Lee “to do everything in your power to help those members.”

— Ask Tennessee Attorney General Herb Slatery to file suit on behalf of the Tennessee National Guard members and coordinate with other states’ attorneys general to file an emergency injunction against the Department of Defense, forcing them to reverse adverse actions against any National Guardsman for refusal to vaccinate.

“We pray that you find it in your heart and your character to take action. Please join us in fighting for the men and women of the Tennessee National Guard,” the petition adds.

According to The Associated Press, up to 40,000 Army National Guard soldiers across the country — or about 13% of the force — have not yet taken the mandated COVID-19 vaccine, and as the deadline for shots looms, at least 14,000 of them have flatly refused and could be forced out of the service.

Guard leaders say states are doing all they can to encourage soldiers to get vaccinated by the time limit. And they said they will work with the roughly 7,000 who have sought exemptions, which are almost all for religious reasons.

“You are their commander-in-chief,” the petition says to Lee. “We implore you to do everything within your power to fight for these dedicated men and women. To date, sir, you have been silent. We implore you to be silent no more.”

Shelton told the Times Free Press that “after this now, honestly, I don’t care what happens to me. Because this is more important because we were always taught to take an oath to defend our soldiers. And if their health is being affected and nobody’s stepping up for them, it is my duty to do that.

“And I will walk through hell with a can of gasoline in each hand and back for my soldiers if I had to,” Shelton added.

Mickey Shelton, a Tennessee National Guard captain from Grainger County who is a member of the 230th Sustainment Brigade out of Chattanooga, was misdentified in an earlier version of this report.