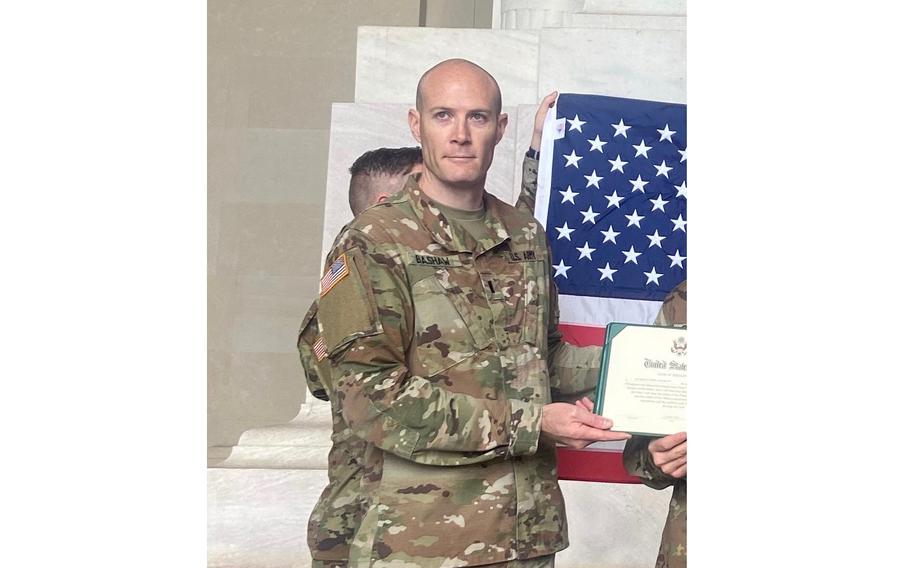 First Lt. Mark Bashaw, an entomologist with the Army Public Health Center at Aberdeen Proving Ground, Md., said he faces an administrative separation from the Army for a loss of confidence, after he was convicted, but not punished, for failing to obey orders related to preventing the spread of coronavirus. (Photo provided by 1st Lt. Mark Bashaw)

An Army officer convicted and sentenced to no punishment during a court-martial for violating coronavirus prevention protocols said he now faces involuntary separation from service.

First Lt. Mark Bashaw, an entomologist with the Army Public Health Center at Aberdeen Proving Ground, Md., was counseled Monday by his company commander, who placed a “flag” on Bashaw’s record “due to a referral of involuntary separation and since the command has lost confidence in him,” according to a statement from Bashaw’s attorney David Willson. The restriction on his record blocks a promotion to captain for which Bashaw was previously selected but was held up during court-martial proceedings.

“They now have egg on their faces and are thoroughly embarrassed that their plan of making an example of 1st Lt. Bashaw has gone awry,” Willson said.

The 16-year veteran of the Army and Air Force now faces an administrative separation, according to Bashaw, who has taken a strong religious stance against receiving the coronavirus vaccine. The Defense Department has mandated all service members receive the vaccine and has begun separating those who don’t.

“Out of respect for our employees' privacy, [Army Public Health Center] does not discuss personnel matters,” said Chanel Weaver, spokeswoman for the center.

More than 4,450 religious exemptions have been requested and only 11 approved, the service said. Bashaw filed his own religious exemption for all vaccines in September, which is among the 1,105 denied by the Army. He said he has filed an appeal.

As part of his Christian beliefs, Bashaw said he will “rely on my God-given immune system.”

Bashaw was convicted in a court-martial in April for failing to comply with orders related to coronavirus prevention efforts in his unit’s offices. Col. Robert Cohen, the military judge who presided over the case, declined to punish Bashaw.

Cohen also said in court that he would recommend the case against Bashaw be dismissed by the general officer who convened the court-martial, Willson said.

However, Maj. Gen. Robert L. Edmonson II, senior commander at Aberdeen Proving Ground, approved the conviction on May 26, according to the base.

The charges stem from Bashaw’s actions on Nov. 30 when he failed to obey orders meant to prevent the spread of coronavirus, which violates Article 92 of the Uniform Code of Military Justice, according to court documents. He did not comply with orders to submit a negative coronavirus test before reporting to work and did not obey an order to wear a mask indoors.

The following month, Bashaw filed a formal complaint, known as an Article 138 in the UCMJ. In the complaint, he said he faced discrimination from his company commander for his religious beliefs as well as for questioning the validity of orders involving products under emergency-use authorization. He lost his security clearance, access to his unit’s facilities, and was singled out because of his beliefs, according to the complaint.

Bashaw also wrote he faced retaliation for a previous Article 138 inquiry and other questions that he has raised to Army Public Health Center leadership and a task force stood up in response to the coronavirus pandemic about certain medications, treatments and the side effects and deaths associated with coronavirus vaccines under emergency use.

Bashaw transitioned to the Army in 2019 after serving in the Air Force. He enlisted in 2006 as a pest management craftsman, attaining the rank of master sergeant, according to his official service record.