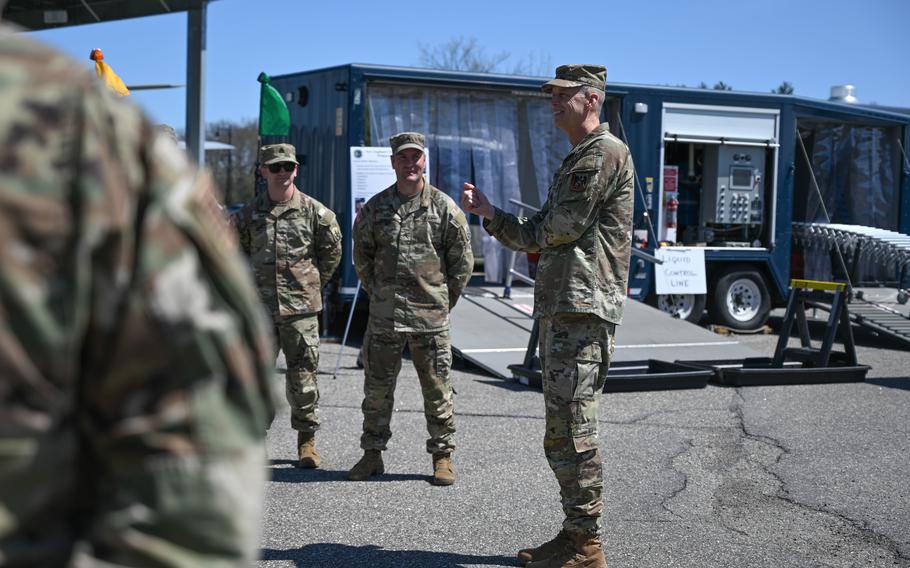 Sen. Tammy Baldwin, D-Wis., said she plans to introduce new legislation to expand health care coverage for military reservists, including some 60,000 National Guard members who lack health insurance when they are not on military duty.

The bill would expand free access to TRICARE coverage to all service members in the National Guard and Army, Air Force, Navy and Marine reserves who are now only eligible for free health care while in certain active-duty military statuses — typically when they are called to active-duty for more than 30 consecutive days. In addition to the 60,000 National Guard troops who lack private health insurance, another roughly 70,000 reservists lack health coverage, according to members of Baldwin’s staff.

Baldwin called the issue a combat readiness problem during a hearing Tuesday of the Senate Appropriations Committee’s defense subpanel. She said expanding free health coverage to all military reservists would only incur an about 3% increase in the Pentagon’s budget for reserve component personnel, citing information provided by the Defense Health Agency.

“The Defense Health Agency is on record agreeing that health care coverage is really a readiness issue for the total force,” Baldwin said during the hearing when she announced her planned legislation.

However, the senator did not provide specifics about her plan and timing of the introduction of her bill was “yet to be determined,” Baldwin’s staff said Wednesday in an email.

“Sen. Baldwin’s legislation will ensure that every service member has health care, including addressing financial barriers to mental health, in turn, helping improve readiness of service members and providing incentives for service and hiring service members,” according to Baldwin’s office.

The lack of universal health care coverage for National Guard troops has long been among the top issues for Army Gen. Daniel Hokanson, the chief of the National Guard Bureau. He said Tuesday that the issue has only grown more important as Guard forces have grown busier than ever during the last two years — responding to myriad issues including the coronavirus pandemic, civil unrest across the country, increased natural disasters, and supporting U.S. Border Patrol operations along the U.S. southern border.

“When I look at what we've asked our Guardsmen and reservists to do over the last two years, you know, we talk about the fight, the force has to be ready to go [at any time],” Hokanson told the senators. “You look at [the coronavirus] and our requirement to ask Guardsmen ad reservists to come on duty almost immediately — one of the key things there is that they have to be medically ready to do that.”

The general said Congress should take steps to ensure part-time troops have permanent health care options “and that they can afford it.”

“It's really important,” he said. “It'll make a huge impact to our readiness.”

National Guard members and military reservists receive what is called “line of duty” coverage any time they are on duty, including drill weekends, which insures them for illnesses or injuries suffered while they are in uniform. But those troops do not have access to the free full medical coverage provided by TRICARE that active-duty troops receive except when they are also on active-duty orders for at least 30 days. Some Guard members and reservists are eligible for military health benefits, but they must pay monthly premiums and co-pays when not on active duty for 30 days, according to TRICARE, the U.S. military’s health care provider.

Pentagon officials in the past said most part-time troops would have health care coverage from their non-military employer, but some Guard members and reservists do not receive health insurance from their civilian jobs or do not have another job.

Baldwin’s bill would seek to end any medical fees for American troops, regardless of their duty status, according to her staff.

Reps. Andy Kim, D-N.J., and Trent Kelly, R-Miss., introduced the Healthcare for Our Troops Act in May 2021, which sought to provide TRICARE coverage free of premiums and co-pays to all National Guard members and reservists.

Though their bill has yet to receive a vote, members of Kelly’s staff said Wednesday that it remains a priority for the congressman. Kelly is a major general in the Mississippi Army National Guard who has served 36 years.

It also remains a top priority for Kim, the congressman’s spokesman Forrest Rilling said Wednesday. Kim hopes the measure will be included in the forthcoming fiscal 2023 National Defense Authorization Act, the yearly bill which sets policy and spending priorities for the Pentagon, Rilling said.

“The health, welfare and safety of our force is of the utmost importance to me,” Austin said during the hearing on June 24, 2021. “I would welcome any initiatives that enable us to provide better health care, more efficient health care, to all the components of our service."