Nine unvaccinated airmen who were denied exemptions from the federal COVID-19 inoculation mandate are asking a court to prevent the Defense Department from punishing them for their violation of a presidential order.

Their class-action lawsuit, filed in the Dallas-based U.S. District Court for the Northern District of Texas, claims that the denial of their exemptions violates their First Amendment right to free exercise of religion. It names Defense Secretary Lloyd Austin and Air Force Secretary Frank Kendall.

The complaint seeks a restraining order and a preliminary injunction barring the Air Force from enforcing penalties against the plaintiffs, who it says lost out on previously announced promotions and were put on no-pay status.

They are among the 3% of Air Force members who have not complied with the order, the lawsuit says.

Among other contentions, the plaintiffs argue that the vaccine requirement is “not the least restrictive means of accomplishing the government’s purported interest.” 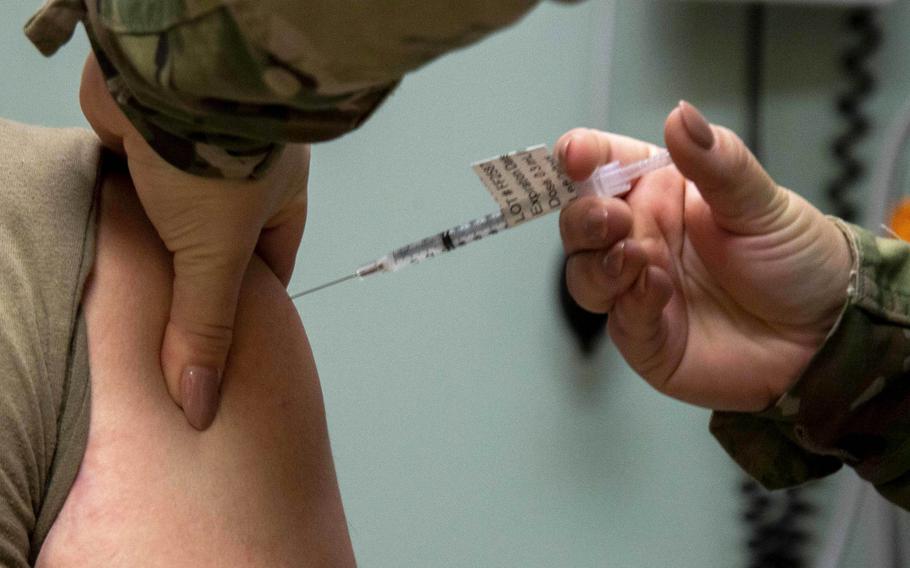 An airman receives a COVID-19 vaccination at MacDill Air Force Base, Fla. in 2021. Nine airmen have filed a class action lawsuit against Air Force Secretary Frank Kendall and Defense Secretary Lloyd Austin because their requests to be exempted from COVID vaccinations were denied. (Hiram Martinez/U.S. Air Force)

They base that argument on the Air Force’s 97% vaccination rate and the fact that people inoculated against COVID-19 can still transmit the disease or become infected with it.

The airmen are represented by the First Liberty Institute in Texas and the Washington, D.C., law firm Schaerr Jaffe.

No court date has been set yet for the lawsuit, which was filed May 27. The First Liberty Institute is expecting a hearing or possibly a preliminary order once the Air Force has filed its response, said Mike Berry, the group’s director of military affairs.

Two of the airmen in the lawsuit also sought exemption from the vaccination order on medical grounds, citing allergies as the reason. The Air Force rejected the allergy tests and told one of the plaintiffs the results were fraudulent because they came from an “illegitimate” doctor, the suit contends.

Six of the nine airmen are fighter pilots or instructors or are in training; the others work outside of aviation.

According to the lawsuit, Corcoran, a reservist, is assigned to Germany’s Ramstein Air Base, but he works remotely from Kelly Air Force Base in San Antonio, Texas, where he analyzes classified intelligence reports and other information.

Corcoran’s commander told him the Air Force is preparing an official reprimand that will soon be added to his file, jeopardizing his career and retirement, the suit alleges.

President Joe Biden issued the vaccination mandate on July 29, 2021. Active-duty airmen and Space Force guardians had to be fully vaccinated by Nov. 2, 2021. Reservists were given until Dec. 2, 2021, and the deadline for Air Force National Guard members was Dec. 31, 2021.

As of June 6, only 86 Air Force members had been granted exemptions, according to the latest statistics provided by the Air Force.