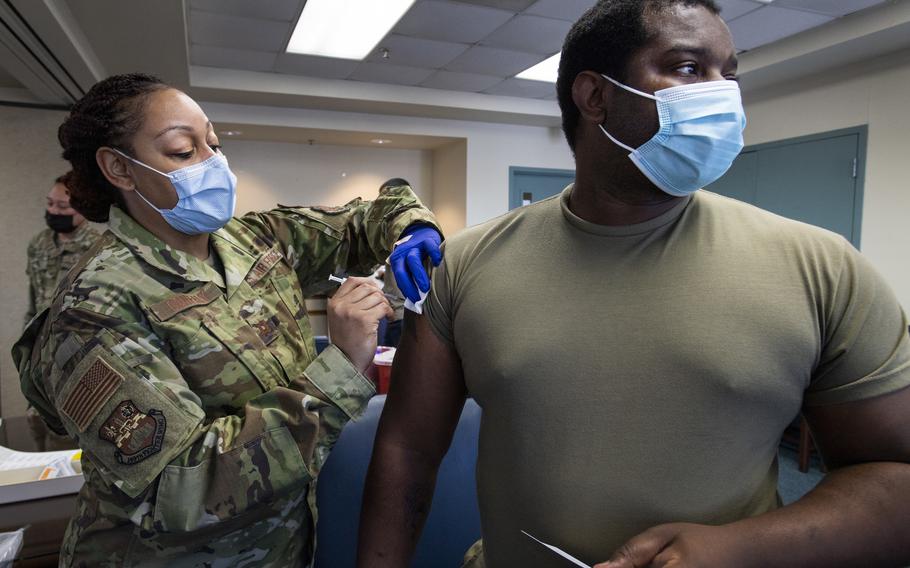 “Gov. Abbott prays that the court declare that the military vaccine mandate and its enforcement against non-federalized Texas National Guardsmen violates the U.S. Constitution and federal law,” the governor’s attorneys wrote in court documents.

Alaska Gov. Mike Dunleavy joined the Texas lawsuit on Jan. 25 but had not filed a separate motion for a temporary injunction for Alaska Guard members as of Tuesday, according to court records.

Austin in August required all service members to receive the vaccine or face separation from the military. The National Guard’s vaccination deadline isn’t until June, yet federally activated Guard members are required to adhere to the Army and Air Force’s deadlines, which passed late last year.

In the suit, the attorneys argue Abbott, as commander in chief of the Texas National Guard, has the authority to waive the mandate for Guard members not deployed on a mission ordered by the federal government.

The injunction request argues District Judge J. Campbell Barker should temporarily halt the federal mandate for troops under Abbott’s state authority because allowing it to continue “would undermine the chain of command, blur the lines of accountability, and hollow out the Texas National Guard in a way that puts all Texans at risk.”

“This court should enjoin the Biden administration’s attempt to commandeer Gov. Abbott’s commander-in-chief power,” the request said. “A preliminary injunction is needed to prevent these imminent and irreparable harms to Gov. Abbott and the sovereign state he serves.”

About 45% of the Texas Army National Guard is fully vaccinated, according to the document, meaning the service “stands to lose 10,756 soldiers, or 55% of its force” should the vaccination rate and mandate remain unchanged.

“It would take decades to recover from this loss, which amounts to nearly 80,000 service years of leadership, experience and capabilities,” according to the document. “It would take roughly $1.3 billion just to recruit, onboard, and train new members to begin the long process of recovering from such a loss.”

The Texas Air National Guard “has already lost approximately 90 airmen due to the vaccine mandate,” according to the request. It did not say whether those troops willingly left the service or if they were separated in accordance with the mandate.

“Eighty-three more have since refused to be vaccinated and, according to Air Force guidance, should be discharged,” the document said.

Further, an additional 161 airmen have submitted requests for exemptions to the mandate, “almost all of which are expected to be denied,” according to the document. The Pentagon allows troops to apply for waivers for medical, religious and other administrative reasons, but the vast majority have been denied, according to service data.

“Assuming those airmen all ultimately refuse the vaccine, there would be a total reduction of 7.2% of the Air Guard’s force,” the document said.

In Alaska, about 8% of the National Guard are unvaccinated, about 90% of who applied for religious or medical exemptions “yet no such exemptions have been granted,” according to court documents.

The filing is the latest in a series of court challenges to the federal vaccine mandate filed in federal courts in Texas.

On Jan. 3, the U.S. District Court for the Northern District of Texas granted a preliminary injunction halting the mandate for 35 Navy special operators arguing the mandate violated their religious freedom. The Pentagon has been working with the Justice Department for the past month on next steps to take, chief Pentagon spokesman John Kirby has said.

On Jan. 21, the U.S. District Court for the Southern District of Texas blocked Biden’s mandate for civilian federal employees. Since then, the Pentagon has said it will not terminate any civilian employees for declining the vaccine, in accordance with the order.

It is unclear when Barker could issue his ruling. The federal government has not yet responded to Abbott’s motion.

Abbott and Dunleavy are not the only governors to challenge the federal mandate. Oklahoma Gov. Kevin Stitt late last year filed a motion in federal court to halt the mandate for Oklahoma National Guard troops but it was denied in December, according to court records.

Oklahoma Adjutant General Tommy Mancino in November issued a memo announcing Oklahoma would take no “negative administrative or legal action” against its Guard members who decline the vaccine, despite the federal mandate.

Additionally, Dunleavy and the governors of Iowa, Wyoming, Nebraska, Mississippi sent Austin a letter in December objecting to the mandate and asking the secretary to allow unvaccinated Guard troops to attend mandatory trainings and drill weekends.

Austin replied to the letter in late January but did not approve the requests, according to the Pentagon.