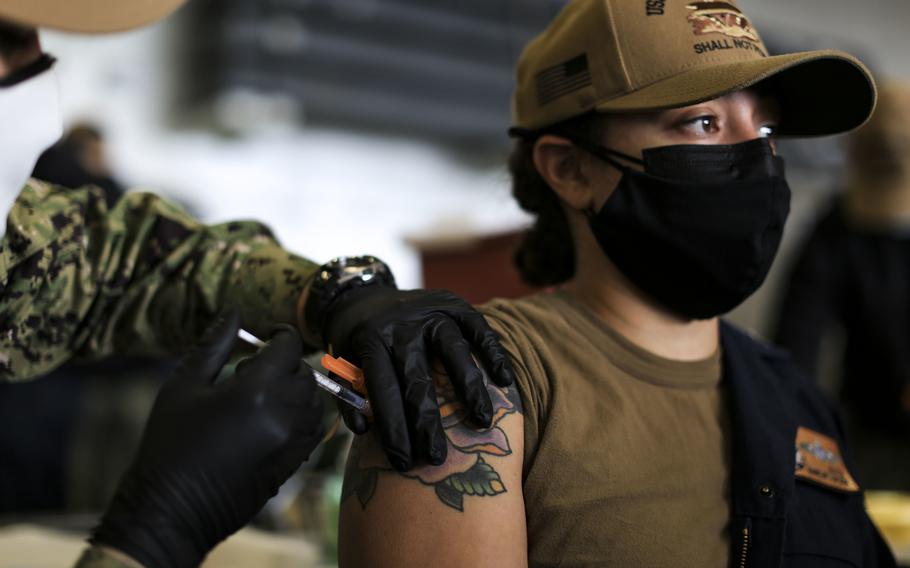 Machinist’s Mate 1st Class Kayla Matos receives a COVID-19 booster shot during a shot event in the hangar bay aboard USS Abraham Lincoln on Dec. 28, 2021, in San Diego. All active-duty military personnel are required to be vaccinated against the coronavirus. (Lake Fultz/U.S. Navy/TNS)

"Forcing a service member to choose between their faith and serving their country is abhorrent to the Constitution and America's values," Berry said. "Punishing SEALs for simply asking for a religious accommodation is purely vindictive and punitive. We're pleased that the court has acted to protect our brave warriors before more damage is done to our national security."

The order prevents the Navy from applying its vaccine mandate and administrative discharge policy on the 35 sailors involved in the lawsuit. All active-duty service members are required to be fully vaccinated against COVID-19. Those who refused the vaccine face punishment including discharge from the military.

A Navy spokesperson, citing ongoing litigation, declined to comment on the ruling. It is unclear whether it will have any affect on other sailors facing separation.

As of Thursday, the Marine Corps had already booted 206 Marines for refusing the vaccine. The Navy is expected to begin doing the same, according to a Dec. 15 administrative message.

The judge, Reed O'Connor, said in his order that the Navy's blanket denial of all religious waiver requests amounted to a violation of their rights under the First Amendment and the Religious Freedom Restoration Act.

"The Navy servicemembers in this case seek to vindicate the very freedoms they have sacrificed so much to protect," O'Connor wrote in the ruling. "The COVID-19 pandemic provides the government no license to abrogate those freedoms. There is no COVID-19 exception to the First Amendment. There is no military exclusion from our Constitution."

O'Connor goes on to write that the claims of the 35 sailors are "strong," noting that "secular" waivers, in the guise of medical waivers, were approved while religious ones were not.

The judge goes on to say that the loss of the sailors' "religious liberties outweighs any forthcoming harm to the Navy," and that although 80 service members have died from the virus, 99% of the Navy is vaccinated and that "COVID-19 treatments are becoming more effective and widely available."

O'Connor, who was appointed in 2007 by then-President George W. Bush, made news as the state government of Texas challenged Obama administration policies in court, striking several down. According to the Texas Tribune, that was no accident, as the state repeatedly filed cases in O'Connor's district.

Notably, O'Connor struck down the entirety of the Affordable Care Act in 2018 after Texas and several Republican-led states sued. That ruling was overturned by the U.S. Supreme Court in June.