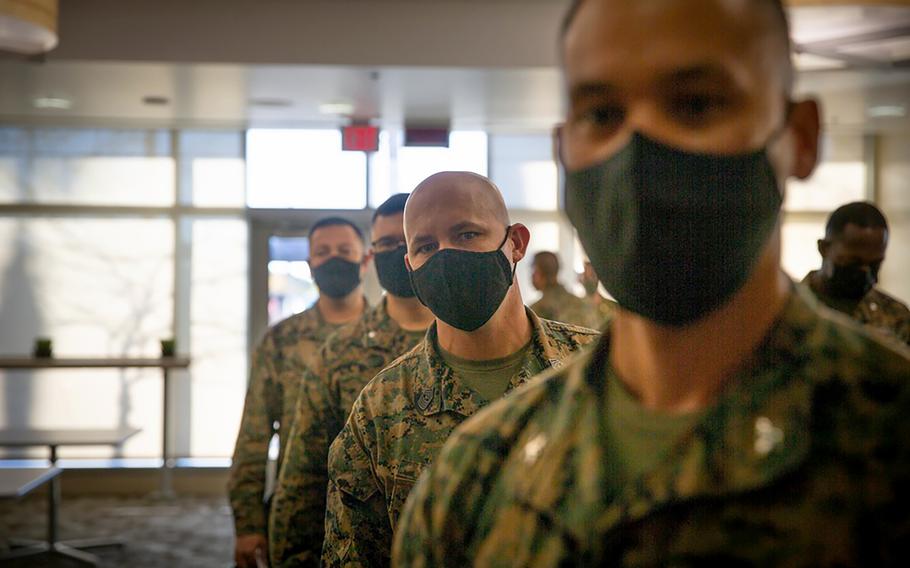 The Marine Corps has received 3,350 requests for religious exemptions to the vaccine, the service said in a statement. The service declined to comment on the nature of the requests or why the two were granted after 3,212 were denied, citing privacy considerations. The remaining 138 requests have yet to be adjudicated.

“At every step, each accommodation request is given full consideration with respect to the facts and circumstances submitted in the request,” the Marine Corps said in its statement. “In each case, every reviewer weighs the compelling government interest against the individual’s request and the circumstances of their situation.”

The lack of religious exemptions across the services has drawn scrutiny in recent weeks. On Jan. 3, a U.S. District Court judge in Texas granted a temporary injunction stopping the Navy from applying its vaccine mandate on 35 Navy special operators, citing the First Amendment.

"The Navy servicemembers in this case seek to vindicate the very freedoms they have sacrificed so much to protect," Judge Reed O’Connor wrote in his ruling. "The [coronavirus] pandemic provides the government no license to abrogate those freedoms.”

Chief Pentagon spokesman John Kirby has not said how the Pentagon plans to respond to the injunction, but defense officials are working with the Department of Justice to discuss legal options moving forward.

The Defense Department allows all troops to apply for waivers to the mandate for medical, religious or other administrative reasons, but no service branch had approved any religious waivers until Thursday.

Some airmen who were denied religious exemptions have appealed the decision. So far, 148 appeals are awaiting decisions and 248 appeals have been denied, according to the most recent service data.

The Marine Corps has approved 943 medical and other administrative requests in addition to its two religious exemptions as of Thursday, according to its most recent data.

To date, the Army is the only service not to have kicked out active-duty troops from its ranks for refusing the coronavirus vaccine, according to the latest data provided by the service.

“As of Jan. 11, the Army has not involuntarily separated any soldiers solely for refusing the lawful order to receive the [coronavirus] vaccine,” the service said in a statement. “This month, Army officials intend to issue further guidance for the mandatory initiation of separation for soldiers who refuse this lawful order.”

Without the upcoming guidance, which Army spokesman Lt. Col. Terence Kelly said is still under development, the service doesn’t have a process for separating soldiers who deny the vaccine.

The Army has issued 2,994 general officer written reprimands to vaccine refusers as of Tuesday and has relieved six active-duty leaders from their positions – including two battalion commanders, according to the announcement. Approximately 97% of active-duty soldiers have received at least one dose of the vaccine, according to the Army. Those counted in the unvaccinated total include 3,611 vaccine refusers and others awaiting responses on exemption requests.

Reprimands and ousters followed Defense Secretary Lloyd Austin’s order in August that made the coronavirus vaccine mandatory for all troops. The service branches then set their own deadlines for troops to get vaccinated.

While the Army has yet to kick out soldiers, its active-duty vaccination deadline of Dec. 15 was the last of the service branches. The Air Force deadline was Nov. 2 while the Navy and Marine Corps selected Nov. 28 as their deadline.

As of Tuesday, the Air Force has separated 87 airmen who refused the coronavirus vaccine, according to its most recent data. About 97.6% of its active-duty force has had at least one dose of the vaccine.

The Marine Corps so far has booted out the most troops with 351 Marines separated as of Jan. 6, about 100 of which happened in the past week. The Marine Corps vaccination rates have previously lagged behind the other services, though it caught up this week with about 97% of the force having received at least one dose, according to its most recent data.

The Navy has ousted 20 sailors who had spent less than six months in active-duty service with “entry-level separations,” though the sea service to date has not separated any sailors with longer tenure. However, officials said they will do so in the coming months.

The Navy led the service branches in vaccination rates even before the mandate was established. As of Wednesday, less than 2% of its active-duty force – or about 5,209 sailors -- remain unvaccinated.

So far, the Pentagon has not mandated the coronavirus booster shot, though Kirby on Thursday said those discussions are taking place. To date, the services have not publicly reported how many of troops have received the optional additional dose.

As of Wednesday, nearly 300,000 active-duty, Reserve and National Guard troops have contracted the coronavirus, 2,378 of who were hospitalized and 88 have died, though the Pentagon does not break down that data by branch.

In a statement emphasizing the importance of vaccines, the Marine Corps said about 88% of Marines who have been hospitalized with the coronavirus were unvaccinated at the time of their hospitalization.