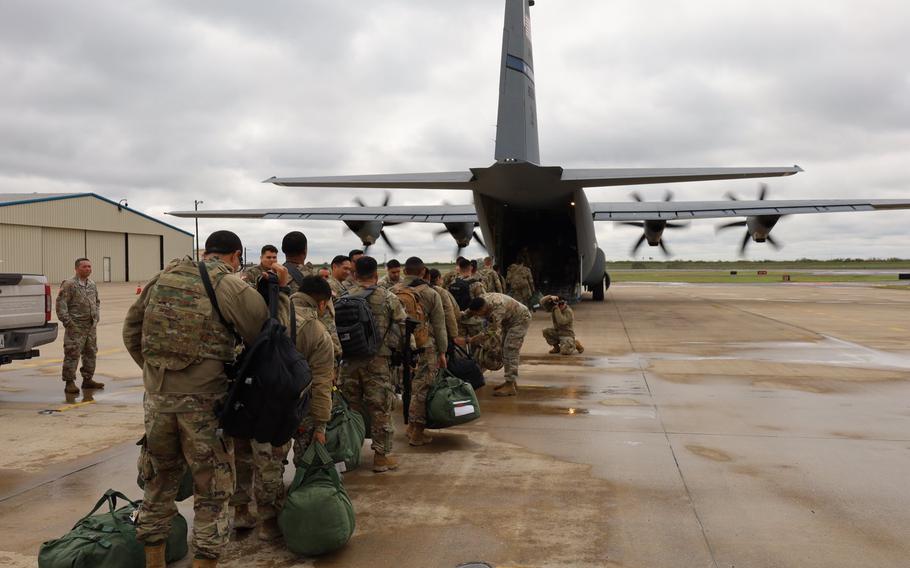 Service members from the Texas National Guard board aircraft in McAllen, Texas, to deploy to El Paso as part of a security response force. The mayor of El Paso on Saturday, Dec. 17, 2022, declared an emergency in the city because of an increase in migration from Mexico. (Texas Military Department)

AUSTIN, Texas — The Texas National Guard on Monday deployed an additional 400 troops to El Paso, where the mayor has declared a state of emergency as a surge of migrants cross the border from Mexico, according to city and military officials.

“The units are deploying as part of a larger strategy to use every available tool to fight the record-breaking level of illegal immigration and transnational criminal activity,” the Texas Military Department said in a statement.

In December, El Paso has seen about 6,000 migrants enter the city weekly, overwhelming federal and local authorities and area nonprofits and shelters, Mayor Oscar Leeser said in the emergency declaration issued Saturday. El Paso, which sits across the Rio Grande from Mexico on the western edge of Texas, has a population of about 678,000.

The troops were expected to be mission ready by Monday afternoon and trained to respond to civil disturbances and mass migration, state military officials said. They join the roughly 5,100 Texas National Guard members already deployed to the state’s border security mission know as Operation Lone Star and come from the 606th Military Police Company, which is headquartered in El Paso.

The additional troops will assist state and local law enforcement in deterring illegal activity between legal ports-of-entry — the same work being done by troops already deployed to Operation Lone Star, according to the military department.

The mission, which is overseen by Texas Gov. Greg Abbott, has always had a smaller number of troops in El Paso. Most of the Texas Guard members deployed to the border are working in and around cities such as McAllen, Laredo, Del Rio and Eagle Pass.

Abbott first deployed National Guard troops to the border in March 2021 with the authority to arrest and work closely with the state Department of Public Safety.

In May, troops began using inflatable boats to conduct patrols on the Rio Grande, which helped the Guard reduce the size of its border force from its peak of roughly 10,000 troops, said Maj. Gen. Thomas Suelzer, commander of the Texas National Guard.

Earlier this month, the Texas Guard sent 10 armored personnel carriers to sit along the Rio Grande as a visual deterrent to migrants.

The mission cost the state more than $1.2 billion in fiscal 2022, Suelzer said during a Nov. 15 hearing of the Texas Senate Border Security Committee.

At the time that Operation Lone Star began, U.S. Customs and Border Protection reported its agents encountered more than 173,200 migrants at the U.S. border with Mexico. In October, the latest month of data available, that number reached more than 230,600.

Four C-130 cargo aircraft from the 136th Airlift Wing in Fort Worth assisted in moving the troops and equipment Monday throughout the state, according to the Texas Military Department.

Additional troops from the 236th Military Company from San Antonio are on high alert to travel to the border, if needed, officials said.

State officials have said they feared the large numbers of migrants would increase Wednesday when the federal government was expected to lift “Title 42,” a coronavirus pandemic-driven public health policy that allowed Border Patrol agents to send migrants back into Mexico quickly because of concerns they would spread the virus.

However, the Supreme Court on Monday paused the policy’s repeal to give the justices time to review it following an emergency request from 19 Republican-led states, according to court documents. Last week, a lower court had rejected the states’ bid for intervention on the policy’s repeal.

Chief Justice John Roberts signed the order, which asked the Department of Homeland Security to respond by Tuesday afternoon.

“The end of Title 42 is expected to lead to a massive influx of illegal immigrants allowing criminals to further exploit gaps while federal authorities are inundated with migrant processing,” the Texas Military Department said.

Thousands of additional migrants from Latin America have begun to gather near the U.S.-Mexico border to be processed after Title 42 lifts, according to Leeser’s emergency declaration. After being processed, the people would be given a court date and released “onto El Paso streets with little to no resources,” the mayor wrote.

The increase in arrivals began in August as El Paso began to see about 2,000 people each week, according to Leeser’s declaration. Customs and Border Protection began releasing about 1,000 each day in the city.

El Paso officials have sent nearly 14,000 migrants to larger cities and shelters to alleviate the strain on resources, but Leeser said the numbers have continued to grow. With temperatures expected to dip below freezing this week, he wrote there are now inherent risks in the demand on local shelters.

Leeser said Monday during a news conference that the city will continue to prepare as if Title 42 would be lifted.

“We've heard that the numbers [of migrants ready to cross into Texas] are really big in Mexico,” he said. “There's probably over 20,000 over there today that are waiting for Title 42 to be lifted.”