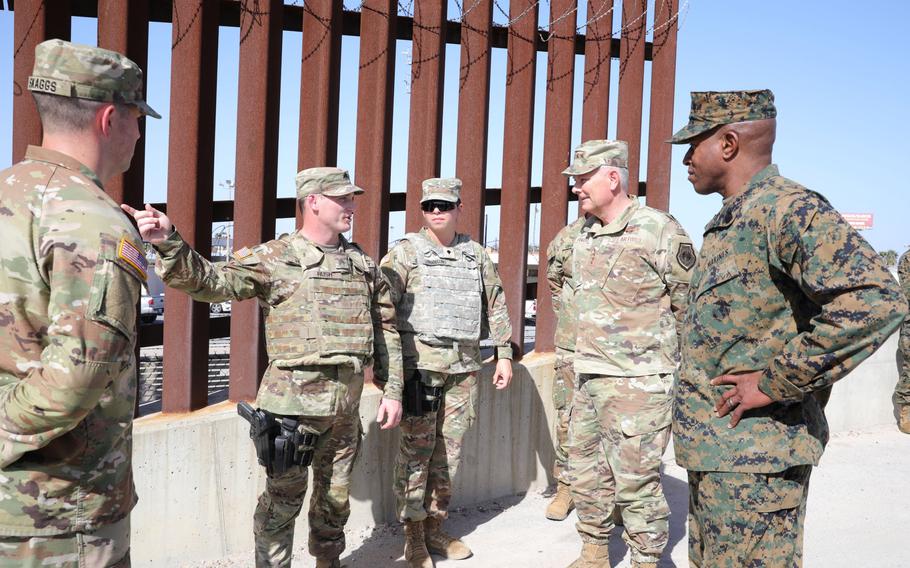 Pentagon officials under a provision in the defense policy bill would be required to report every three months to lawmakers about its mission along the U.S.-Mexico border to improve oversight and understanding of the work that troops are doing to help secure the region.

The new initiative is meant to increase attention on border security as the number of migrants crossing into the U.S. and encountered by Customs and Border Protection remains high, said Sen. James Inhofe of Oklahoma, the top Republican on the Senate Armed Services Committee.

Inhofe said Republicans pushed for the provision to be included in the fiscal 2023 National Defense Authorization Act, an annual bill that outlines defense priorities and spending, and blames the increase in migration from Mexico on President Joe Biden’s administration.

“Many of my Republican colleagues and I believe that this lax approach to border security must end — now. The NDAA’s provision for quarterly briefings on border security will ensure that the highest levels of the Department of Defense are focused on the crisis at the southwest border, and compels them to brief Congress every three months on its plans for supporting border security operations,” Inhofe said in a statement.

In October, Border Patrol agents encountered more than 230,000 migrants, either detaining them or returning them to Mexico, which is about 66,000 more than the previous October, according to the agency’s data.

This replaces a previous requirement for an annual briefing, according to a news release from the House Armed Services Committee.

“This ensures Congress continues to have oversight on support provided at the southern land border,” the House committee said in a statement.

The briefings should include how defense officials are incorporating border mission requirements into plans, ongoing support and the risk assessment that was conducted for that support, and any efforts or updates to cooperate with Mexico for border security.

Briefings should be unclassified unless a classified briefing is necessary. The first should be held in January with the others following within 90 days until Dec. 31, 2024.

The Pentagon began deploying troops to the U.S. border with Mexico in April 2018 following then-President Donald Trump’s declaration of an emergency at the border caused by migrants crossing illegally into the United States. When Biden took office in January 2021, he rescinded the emergency declaration, but left the troops at the border.

At one point in 2019, the Defense Department had nearly 8,000 troops deployed to the border, which included about 5,800 active-duty service members. However, a Government Accountability Office report released in February 2021 found the deployments had a negative impact on those units, and the military has phased out using active-duty troops at the border with Mexico.

Defense Secretary Lloyd Austin most recently approved up to 2,500 troops to assist CBP agents through September 2023, the end of the fiscal year. There are about 2,400 National Guard troops now serving on the mission, said Bill Lewis, spokesman for U.S. Northern Command, the Defense Department combatant command that is leading the effort.

“NORTHCOM provides information to the various defense committees, about our assigned missions, as required,” he said.

The troops ordered to the border by the Defense Department operate separately from a deployment of about 5,100 Texas National Guard troops working on a state-sponsored mission that began in March 2021 to help state police deter illegal activity between the legal ports-of-entry.

Department of Homeland Security Secretary Alejandro Mayorkas spoke this week from the border city of El Paso, Texas, and said immigration reform is needed to tackle the increased migration at the southwest border.

“Addressing this challenge will take time and additional resources, and we need the partnership of Congress, state and local officials, [nongovernmental organizations], and communities to do so,” he said.

The House approved the measure last week and the Senate is expected to vote on the NDAA by the end of the week. Then it will go to the White House for Biden to sign into law.