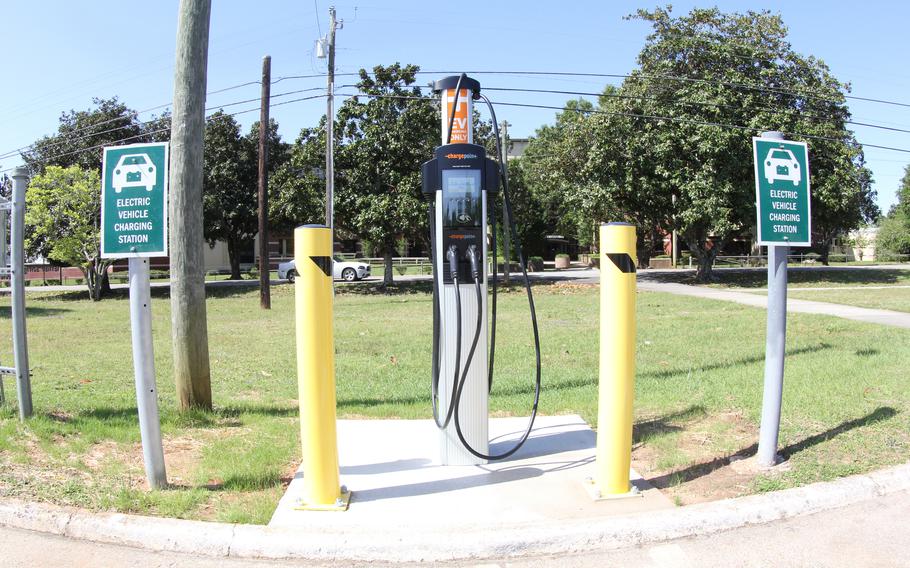 The electric vehicle charging station in front of the soldier service center at Fort Rucker, Ala. Only vehicles receiving the service are allowed to park in the two spaces next to the charger. (Jim Hughes/Fort Rucker Public Affairs Office)

WASHINGTON — Senators introduced legislation Monday that would force the military to rapidly transition its fleet of nontactical vehicles to electric as Congress looks to curb the Pentagon’s impact on climate change.

At least 75% of cars, vans and light-duty trucks purchased or leased by the Defense Department beginning Oct. 1, the start of the fiscal year, would need to be electric or zero-emission under the bill. The Pentagon has more than 174,000 nontactical vehicles, the second-largest federal fleet after the U.S. Postal Service.

“Transitioning the Defense Department’s noncombat vehicle fleet to electric and other zero-emissions vehicles is a critical step in reducing our government’s carbon emissions,” Sen. Mazie Hirono, D-Hawaii, said in a statement. “This legislation will help combat climate change while helping to ensure our military has the advantages of a modern fleet of vehicles that reduces the military’s dependence on oil.”

The Defense Department is the largest institutional consumer of petroleum in the world and emits more greenhouse gas than two-thirds of all nations, according to a climate change strategy the Pentagon unveiled in October.

President Joe Biden announced a plan last year to reduce the federal government’s gas emissions by 65% by 2030 and transition to an all-electric fleet of cars and trucks by 2035. The Pentagon is responsible for 56% of the government’s greenhouse gas emissions, according to the White House.

The legislation proposed Monday, which senators are seeking to include in the sweeping 2023 national defense policy bill, would push the military to accelerate its efforts to become more environment friendly. Sens. Hirono and Elizabeth Warren, D-Mass., are leading the legislation alongside Rep. John Garamendi, D-Calif., who introduced a companion bill in the House in April.

“We have a responsibility — as a nation and within our military — to make thoughtful purchases that address the climate crisis,” Garamendi said in a statement.

Other provisions in the bill encourage the Pentagon to increase investment in electric vehicle charging stations at military installations and prohibit the sourcing of electric vehicle components from hostile nations such as China and Russia.

The legislation follows other recent moves by lawmakers to mitigate the military’s effect on the environment. Defense Secretary Lloyd Austin has called climate change an “existential threat” to national security.

A subpanel of the House Armed Services Committee advanced a measure last week that would require each service branch to devise plans for transitioning every nontactical vehicle at a selected military installation to electric power by 2025.

Duckworth also is hoping to attach the bill to the 2023 National Defense Authorization Act, the annual defense legislation that Congress began marking up last week. The Senate Armed Services Committee is advancing its version of the bill this week.