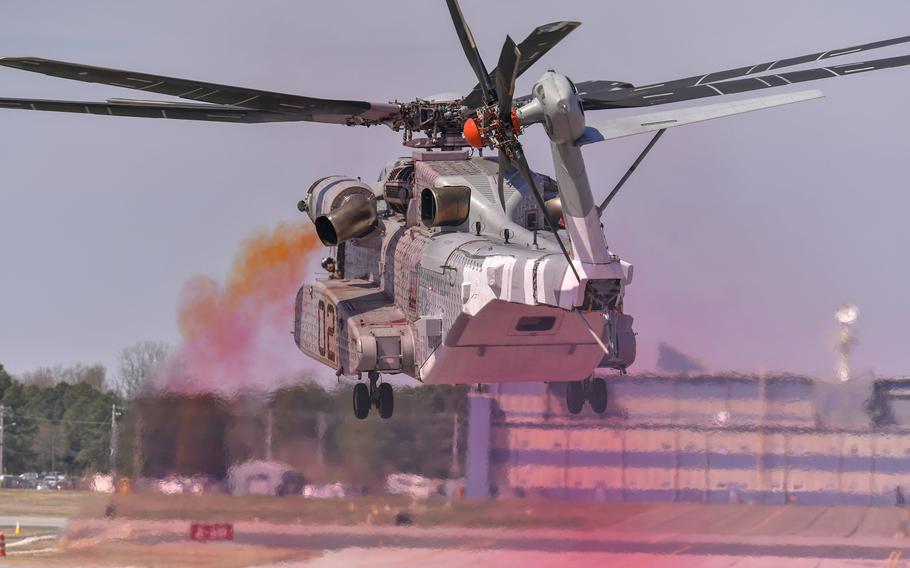 Colored oil smoke surrounds a CH-53K King Stallion at Naval Air Station Patuxent River, Md., in 2019. The bulk of the Navy’s CO2 emissions come from ships and aircraft, but those platforms are the hardest to decarbonize because of the amount of energy they require and the missions they perform. (Megan Wasel/U.S. Navy)

An ambitious plan to make the U.S. Navy greener aims to raise the energy efficiency of the service’s ground vehicles, boost its supply of lithium batteries and install cyber-secure microgrids, among other goals.

But there’s a glaring omission in the strategy. It lists no emission-reduction targets for the Navy’s ships and planes, which account for the bulk of the department’s carbon dioxide output, and are widely regarded as the hardest to decarbonize because of the amount of energy they require and the missions they perform.

Still, the Navy says in its new plan that it should be able to reduce its overall emissions by 65% by 2030 and reach net-zero emissions by 2050. The term means some greenhouse gases are released but are offset by the removal of an equivalent amount of the gases from the atmosphere.

“For the Department of Navy, this is existential,” Navy Secretary Carlos Del Toro said in a forward to the strategy. “Our naval forces, the United States Navy and Marine Corps, are in the crosshairs of the climate crisis: the threat increases instability and demands on our forces while simultaneously impacting our capacity to respond to those demands.”

In addition to those targets, the Navy pledged to cut 5 million metric tons of carbon dioxide by 2027, which is the equivalent of removing 1 million cars from roads.

The service says it also plans to get all of its electricity through “carbon pollution-free” means by 2030; have a fleet of zero-emission vehicles by 2035; and halve the CO2 emissions from its installations by 2032. 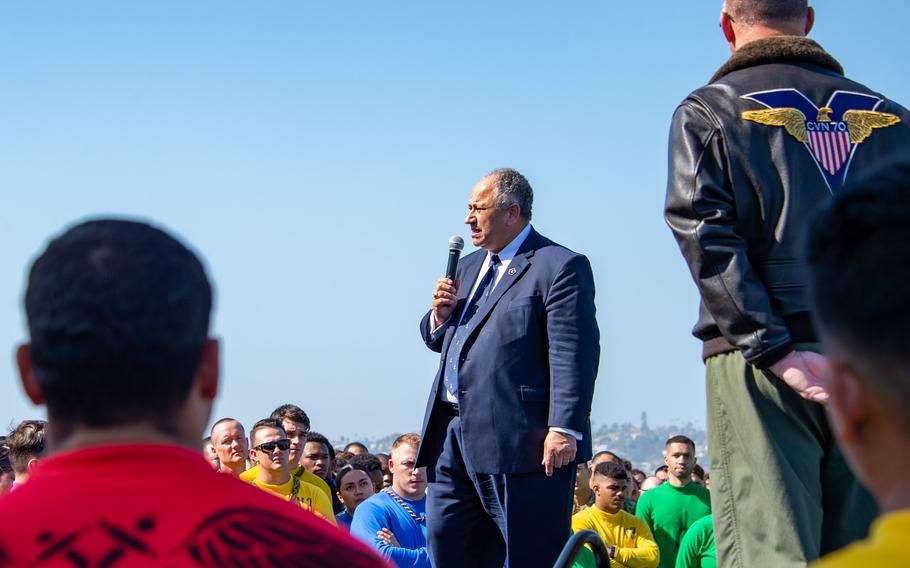 Navy Secretary Carlos Del Toro addresses sailors of USS Carl Vinson in San Diego on May 4, 2022. Del Toro said climate change is a threat that increases instability and demands on U.S. forces and affects their capacity to respond to those demands. (Analice Baker/U.S. Navy)

Cyber-secure microgrids are one of the ways the Navy will operate carbon pollution-free power at its installations, the strategy said. Microgrids are small-scale power generators, often creating energy from several sources, that can operate independently or collaboratively.

At the same time, the service would draw carbon dioxide out of the atmosphere and ensure a domestic supply of lithium batteries to help meet its climate goals.

Scientists say rising sea levels, recurrent flooding and more frequent and destructive hurricanes result from man-made climate change and are a particular challenge for the Navy.

“Climate change increases risk, exposes vulnerabilities to our people, installations, platforms, operations, and allies and partners,” Meredith Berger, assistant secretary of the Navy for energy, installations and environment, said in a statement Tuesday. 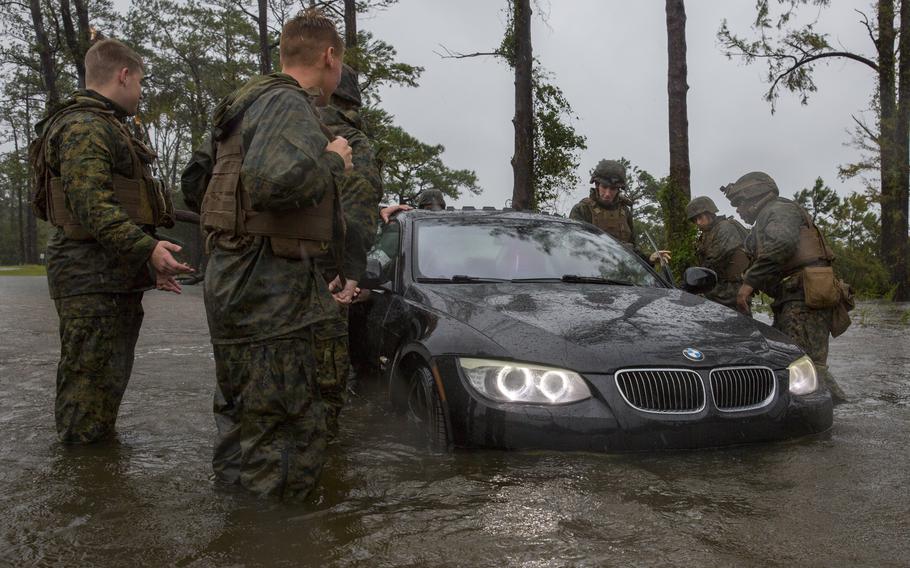 Marines push a car through a flooded area during Hurricane Florence at Camp Lejeune, N.C., in 2018. Climate change poses a challenge for the Navy, the service acknowledged in its recently released climate action strategy. (Isaiah Gomez/U.S. Marine Corps)

The Navy says in its strategy that it will equip sailors to operate in a world with more volatile weather. For example, climate threats will be incorporated into war games and training exercises.

However, DOD says it is taking the threats posed by climate change seriously and released an overarching climate plan in October. 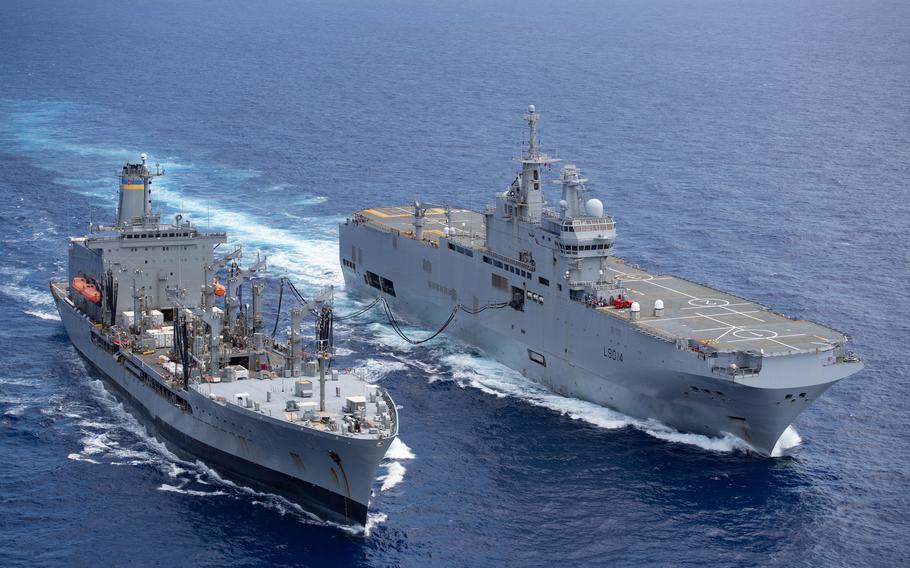 The U.S. Navy oiler Big Horn, left, replenishes the French navy’s Tonnerre in the Philippine Sea in 2021. The Navy unveiled its climate action plan Tuesday, but the strategy doesn’t address reduction of carbon emissions from ships and aircraft. (U.S. Navy)