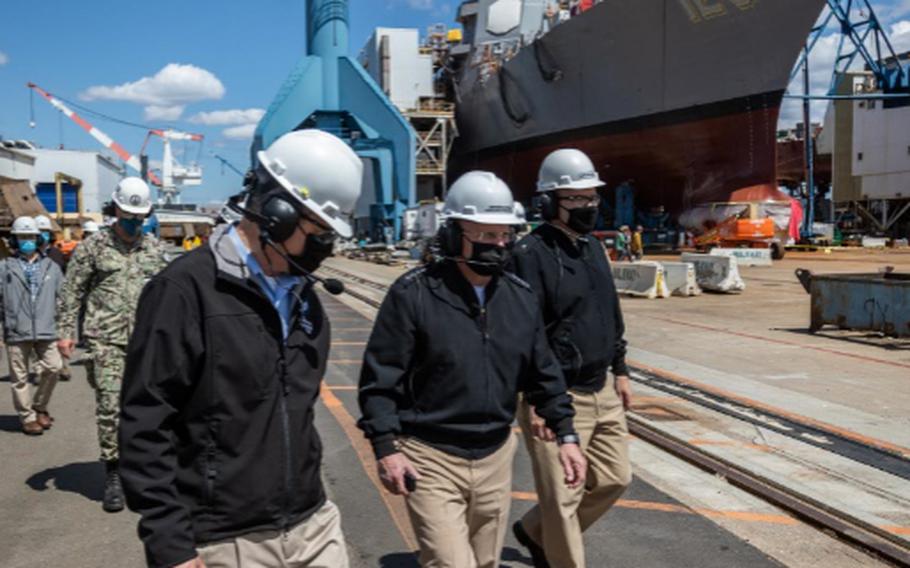 A torrential rain storm in late September 2015 coinciding with high tide waters and leaves clogging drains sent him racing to a low-lying Central Maine Power Co. substation near the Kennebec River to check equipment. The water was already 2 feet deep, so he could not get too close.

Gerard, an electromechanical worker and 33-year veteran of the electric utility, called the substation's operations director, who decided to shut off power to the utility's 4,000 customers in and around the midcoast city.

That included Bath Iron Works, a shipyard across the street that is one of Maine's largest private employers and that the U.S. Navy designates as "strategic infrastructure." The waters did not reach the shipyard, but the power outage forced it to send home first-shift workers and to cancel the second shift. A worker inside a shipyard assembly building was briefly stranded in a crane box because the structure's electronic doors couldn't be opened for the fire department's ladder truck.

Bath, the 8,500-resident "City of Ships," is among the places in Maine facing the greatest risks from increased coastal flooding because so much of it is low-lying. The rising sea level in Bath threatens businesses along Commercial and Washington streets and other parts of the downtown, according to an analysis by Climate Central, a nonprofit science and journalism organization.

Water levels reached their highest in the city during a record-breaking storm in 1978 at a little more than 4 feet over pre-2000 average high tides, and Climate Central's sea level team found there's a 1-in-4 chance of a 5-foot flood within 30 years. That level could submerge homes and three miles of road, cutting off communities that live on peninsulas, and inundate sites that manage wastewater and hazardous waste along with several museums.

"That event gives us a picture of what the future of some of these low-lying areas might look like," Peter Slovinsky, a state marine geologist, said of the 2015 storm. "On top of almost a king tide, plus a bit of storm surge, you ended up with a pretty significant impact."

Flooding is nothing new in Bath, nor around the brackish Kennebec or along Maine's southern coast, where homes hug the ocean. Crucial tourism and working waterfront areas, including part of Bath's downtown, sit on land that was once underwater and was filled. But as seas rise and the warming atmosphere fuels more intense storms, the threats that flooding poses to Bath are growing more severe.

Rising sea levels have already diminished property values across New England. Bath has already seen the highest property value losses in Maine caused by rising sea levels between 2005 and 2017, according to the First Street Foundation, a national group focused on flood risk. In all, $69.9 million was lost in Maine among $403 million across the region. Some 17 percent of Bath properties were at risk in 2019, and that could rise 9 percent in 30 years, with more than 8,000 residential properties at substantial risk statewide.

Residents and businesses are noticing increased flooding prompted by more frequent and severe weather events. Local officials are doing much of what they can to brace infrastructure and adapt the city. Solutions can be expensive and hard to fund, such as a levee that would cost millions of dollars and scenic views, leaving Bath at the vanguard of coastal cities in an uphill and ongoing fight to protect remaining land and their economies.

Maine has had catastrophic floods before, including in April 1987, when a storm combined with snowmelt created record flooding in central and southwestern Maine and led to disaster declarations in 14 of Maine's 16 counties, causing $175 million in damage when adjusted for inflation.

But the likelihood of these types of floods is rising with temperatures. The average annual temperature in Maine has risen 3.2 degrees Fahrenheit over the past 124 years, with the six warmest days on record occurring since 1998, according to a 2020 update to a climate report from University of Maine. Gulf of Maine waters are warming faster than almost every other ocean in the world, according to the National Oceanic and Atmospheric Administration. As the gulf waters absorb heat, they expand.

"With the warming climate, the oceans are warming and fueling more intense storms, and there is more moisture in the atmosphere overall," Birkel said.

Seas at a federal tide gauge in nearby Portland have risen by about 8 inches during the past century, and several more feet of sea-level rise is likely this century along Maine's coast. The Maine Climate Council has recommended that communities and state agencies commit to manage 1.5 feet of sea level rise by 2050 and nearly 4 feet by 2100.

It would come at a high cost. State estimates warn the damage from 3.9 feet of sea level rise by 2100 would cost the state well over $1 billion, almost evenly divided between building and gross domestic product losses.

Road closures that prevent access to homes and businesses cause some of the biggest economic hits from storm flooding, Jeremy Porter, the head of research and development at the First Street Foundation, said. Most cars are unable to be driven in 6 inches or more of water. That level could damage floors, carpets, drywall and insulated appliances and pollute groundwater. Rushing flood waters threaten wastewater treatment plants at the waterfront, potentially dumping raw sewage into the ocean or estuary, and can create safety hazards like a non-secured propane tank becoming a projectile in the water.

Floods also expose critical infrastructure. A new Climate Central analysis showed roughly a quarter of the Bath Iron Works site currently faces frequent flood risks, and those risks are projected to spread to affect two-thirds of the site by 2050. The shipyard is Maine's fourth-largest private employer and one of two U.S. contractors that build Arleigh Burke-class destroyers for the Navy.

The Navy and other parts of the Defense Department have taken notice. Its inspector general's office plans to conduct an audit this year to determine how the Navy should address environmental threats to shipyards. BIW spokesperson David Hench said the shipyard does not publicly discuss potential impacts to its facility or disclose long-range plans. The Navy did not respond to a request for comment.

Maine's state, county and municipal governments are ahead of many other states in planning for climate change effects, according to Samantha Montano, an assistant professor of emergency management at Massachusetts Maritime Academy who lives in Portland, who said "other states aren't even having those conversations."

In December, the state released a four-year climate plan prepared by the Maine Climate Council. Gov. Janet Mills in June signed a law that would require key departments to mobilize a community resilience strategy and ask cities and towns to add climate strategies to their comprehensive plans.

Slovinsky, the marine geologist, said there are four strategies for adapting to climate change: avoiding building in flood-prone areas, adapting by building a seawall or raising structures on posts, retreating to a less risky area and fortifying critical infrastructure. Understanding vulnerabilities and developing resiliency strategies are good starting points to respond to ongoing sea level rise, he said.

Sagadahoc County is updating its 2016 hazard mitigation plan for the 10 towns and one unorganized territory it covers, including Bath, to include more climate change strategies. The revised plan should be submitted to and approved by the Federal Emergency Management Agency in December, and then reviewed by local authorities next year, Grainne Shaw, deputy director of the agency, said. The updated plan will identify new mitigation projects for each town, including pump station upgrades and flood-proofing buildings.

For Central Maine Power, the 2015 flood accelerated plans to upgrade the Bath substation, Kevin Therriault, director of substation operations, said. The utility plans to complete a $14.4 million investment this fall that includes elevating the control house containing the substation battery and protective relays by 18 inches and removing underground feeder cables and raising them overhead. The energized conductors and equipment will be 8 feet higher off the surface of the substation.

At the city level, Bath is more fully addressing climate change in its comprehensive plan update due to be completed this fall. It has established a nascent climate action commission to help the city achieve the plan's recommendations. City planners also collaborated with American Institute of Architects' experts on a study to use green infrastructure to make downtown Bath more resilient.

The city already is acting on recommendations from the institute's Design & Resiliency Team study, Benjamin Averill, Bath's city planner, said. It plans to add a walkway on the northern waterfront, initially envisioned for economic development, that will create a buffer to help avoid business flooding. The city plans to break ground in the next year. More green infrastructure is being examined for where the police station now stands. It has flooded in the past and could do so again, Averill said.

Bath will be one of the communities involved in an emergency drill later this year that will simulate a severe storm as part of an effort from a variety of groups that Eileen Johnson, an environmental studies lecturer at Bowdoin College, is helping to coordinate to prepare for worsening flooding.

"Bath is an important part of the midcoast community," Johnson said. "It's within this larger region of coastal towns with long peninsulas that, when access is cut off, it can have implications for the health and well-being of communities."

This story was produced through a partnership with Climate Central, a nonadvocacy science and news group. Allison Kopicki of Climate Central contributed data reporting.