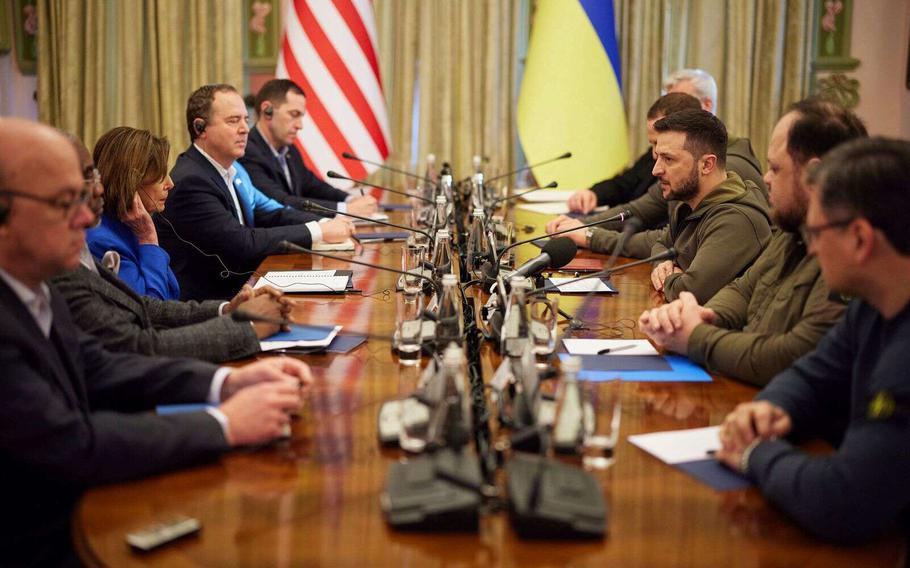 Zelenskyy spoke to Crow, a former Army Ranger, at length Saturday during an unannounced congressional visit to Ukraine’s capital of Kyiv, outlining top priorities for future U.S. weapon deliveries. At the top of the wish list were multi-use drones, multiple rocket launchers and Harpoon missiles to break Russia’s dominance in the Black Sea, Crow told reporters.

“[Zelenskyy] was very clear that the Ukrainian military would not be in the position that they are in right now and would not be able to face the Russian onslaught without … the weapons that we have provided,” the congressman said. “But he was also clear that this battle is changing … and that’s going to require different types of support.”

Ukrainian troops have been using Switchblade drones that detonate on impact to great effect, but Zelenskyy said he needed more advanced, longer-range drones that are armed with precision-strike munitions and capable of being reused, Crow said. The Phoenix Ghost drones that the U.S. is sending in its latest military aid package are also believed to be single use.

The fight for the eastern Donbas region of Ukraine, where Ukrainian forces are facing off against Russian forces across long distances, will also require increased shipments of artillery, particularly the M142 High Mobility Artillery Rocket System, Crow said. The launcher could prove decisive on the battlefield, he said.

“It would really have a devastating impact on the Russian military and provide Ukrainians with a new tool to defend themselves and actually re-seize territory that was taken by the Russians,” Crow said.

For front lines in the south, Zelenskyy is asking for anti-ship missile systems, specifically Harpoons, to repel Russian forces launching missiles from the sea and clear Ukrainian ports for agricultural exports, Crow said.

Ukraine formally closed four ports in the Black and Azov seas on Monday after they had been captured by the Russians. All Ukrainian seaports suspended operations after Russia launched a full-scale invasion of its neighboring nation in February, with some ports either captured or obstructed by Russian forces.

The resulting blockade has strangled shipments of grain, wheat, sunflower oil and other food critical for the Ukrainian economy and feeding countries around the world. Ukraine is sitting on 12 million tons of supplies and will add to that stockpile during the summer harvest season, Crow said.

“Russia does not let ships come in or go out, it is controlling the Black Sea," Zelenskyy said Monday in a television interview. “Russia wants to completely block our country’s economy.”

Harpoons would provide the Ukrainian military with enough defensive capability to allow for the removal of anti-ship mines from the port in Odesa, a key city on the Black Sea that Ukrainians mined to prevent Russian forces from conducting an amphibious assault, Crow said.

“If we can get them the missiles, they can remove the mines and we can then negotiate and set up a humanitarian shipment corridor, start getting food and agricultural shipments out of Ukraine, which would help alleviate and prevent hunger in Africa and the Middle East,” he said.

Zelenskyy is also seeking a new training regime for the Ukrainian military, Crow said. The president told Congress members that he could not afford to rotate out his senior leadership and most experienced soldiers from the front lines to train on new weapons systems outside the country.

Zelenskyy did not ask for a no-fly zone or anything that the U.S. is not capable or willing to provide during his four-hour meeting with lawmakers, Crow said. The Ukrainian leader was serious and somber, the congressman said, and had noticeably changed since Crow last visited Kyiv in December.

“He has become what I think will be one of history’s greatest wartime leaders,” Crow said. “He’s someone who understands weapons systems and tactics and strategy and wartime leadership and communication with the world and with his own people, in a very deep and impressive way.”

Zelenskyy’s appeals for military aid have become more specific and targeted as Ukrainians repeatedly demonstrate their ability to organize and resist the Russian assault, Crow said. He echoed suggestions by several senators Tuesday that a measure of oversight, such as a special inspector general, should accompany future U.S. weapon shipments.

Keeping tabs on the vast amount of weapons and equipment pouring into Ukraine will be beneficial to both countries as Congress deliberates over a $33 billion supplemental aid package to the war-torn nation, Crow said.

“It is certainly in Ukraine’s interest, they have no interest whatsoever in losing track of this stuff,” he said. “They are a very professional force, a very advanced force and they’re highly motivated to make sure they’re keeping control of these systems.”