Republican lawmakers call for reopening US Embassy in Ukraine’s capital 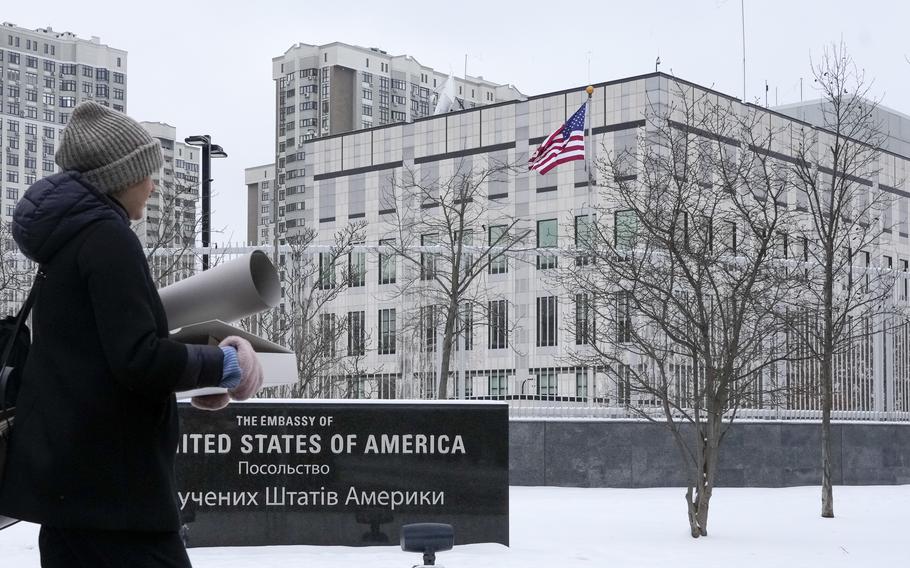 A woman walks past the U.S. Embassy in Kyiv, Ukraine, Monday, Jan. 24, 2022. Some Republican lawmakers are calling for the U.S. to resume its diplomatic presence in Ukraine and reopen its embassy in Kyiv now that Russia’s invading forces have withdrawn from the city’s surrounding areas. (Efrem Lukatsky/AP)

WASHINGTON — Republican lawmakers are calling for the U.S. to resume its diplomatic presence in Ukraine and reopen its embassy in the capital Kyiv now that Russia’s invading forces have withdrawn from the city’s surrounding areas.

Multiple countries recently announced plans to reopen embassies in Kyiv, including Italy, Portugal, Belgium, Austria and Turkey. The embassies of Slovenia, the Czech Republic and Lithuania have already opened their doors, as has the diplomatic office of the European Union. The U.S. needs to quickly follow suit, Republicans said.

“It’s time,” said Sen. Joni Ernst, R-Iowa, an Army veteran. “We have numerous American [non-governmental organizations] operating in Ukraine, thousands of Americans who never left, and American news operations in the country. It’s time to return – and show Ukraine, and the world, our enduring commitment to their freedom.”

The U.S. Embassy moved its consular operations to the western Ukrainian city of Lviv, near the Polish border, days before Russia’s invasion and shuttered its Kyiv office entirely on Feb. 28. Diplomats and staff have been working from Poland ever since.

White House Press Secretary Jen Psaki on Monday declined to set a timetable for a return. Jake Sullivan, the national security adviser, said Sunday that U.S. officials are “working through” when to send diplomats back to Kyiv. The State Department said it is constantly evaluating safety in Kyiv and does not have specifics on when the U.S. Embassy there could reopen.

Pentagon spokesman John Kirby said Thursday that resuming operations at the embassy would require consultation with the Defense Department. The Marine Corps Embassy Security Group, a brigade-sized organization of the Marine Corps, provides security for U.S. diplomatic missions worldwide. About 2,500 Marines are stationed at more than 150 embassies and consulates, according to the State Department.

At least some of the security detachment that worked in Kyiv is likely guarding personnel and sensitive U.S. government information in Poland, Kirby said. The State Department would not confirm how many Marines were assigned to the U.S. Embassy in Kyiv.

“In the meantime, we continue to stay in close touch with the government of Ukraine and its leadership at all levels and engage in conversations with our Ukrainian counterparts every day,” a State Department spokesperson said Thursday.

Ernst criticized the administration of President Joe Biden for being “far too risk-averse” about restoring a diplomatic presence in Ukraine and said a U.S. diplomat she met in Poland last month “tearfully told me she wanted to return.”

Ukrainian President Volodymyr Zelenskyy has urged governments to send back their embassy staff, saying the return of foreign missions would signal to Russia “that Kyiv is ours.” Russian forces retreated from the northern part of the country earlier this month after failing to seize the capital.

“We need your support, even at the level of symbols and diplomatic gestures,” Zelenskyy said last week in a video address. “Please come back, everybody who is brave, please come back to our capital and continue working.”

Sen. Jim Inhofe, R-Okla., and Rep. Rob Wittman, R-Va., praised foreign governments for heeding that call and said the U.S. must now back up its commitment to Ukraine and diplomacy with on-the-ground action.

“We must safely reopen the U.S. Embassy in Kyiv as quickly as possible,” Wittman said. “To do so will send a clear message of our support for Ukraine, emphasize the country’s unquestioned sovereignty, and support and facilitate critical diplomatic channels between the U.S. and Ukrainian governments at various levels.”

Sen. Jacky Rosen, D-Nev., cautioned that a diplomatic return to Kyiv would need to be carefully vetted for security. Embassy personnel in Poland have continued to perform their “important work” even outside the country, she said.

“While it is valuable to have a diplomatic presence on the ground in Ukraine, the State Department will have to determine when our diplomats are able to safely carry out their mission in Kyiv,” she said.

Top politicians, as well as envoys, have poured into the city in recent days.

The presidents of Poland, Lithuania, Latvia and Estonia traveled by train into Kyiv to meet with Zelenskyy on Wednesday. Last week, European Commission President Ursula von der Leyen toured the nearby town of Bucha, where Russians are accused of committing mass atrocities. The United Kingdom's prime minister, Boris Johnson, walked the streets of Kyiv with Zelenskyy in a surprise visit on Saturday.

Rep. Stephanie Bice, R-Okla., described Johnson’s visit as a “powerful demonstration of support for the people of Ukraine.” There are no plans for President Joe Biden to make a similar trip, White House officials have said, though there are reportedly discussions of sending another high-level official to the Ukraine capital.

On Thursday, Rep. Victoria Spartz, the first Ukrainian-born member of Congress, and Sen. Steve Daines, R-Mont., became the first U.S. officials to travel to Kyiv since the start of the war. Spartz asked Secretary of State Antony Blinken on Tuesday to consider redeploying diplomats to Lviv, a city largely untouched by Russian shelling that has served as a hub for people displaced by the war.

“As the single largest provider of military and humanitarian assistance to Ukraine, it is past time that the United States follow our European allies in kind," Spartz, R-Ind., wrote in a letter to Blinken.