The Russian cruiser Moskva, or Moscow, fires a missile in the Black Sea in April 2021. The Moskva is the flagship of the Russian navy's Black Sea Fleet. The Russian navy confirmed the ship was damaged April 13, 2022, and ammunition aboard the vessel detonated as a result of a fire. Ukrainian officials say their forces struck the ship with missiles. (Russian Defense Ministry)

The flagship of Russia’s Black Sea Fleet suffered a catastrophic fire and explosion that Ukraine said Thursday was the result of a missile attack.

Russian officials contradicted Ukraine’s claims, instead blaming the fire on a “localized” source, without providing details.

The cruiser’s missiles were not damaged by the fire and experts were working on towing the ship to port to investigate the cause, Russian officials told RIA.

Pentagon spokesman John Kirby told CNN that the U.S. wasn’t able to confirm whether the explosion was caused by a missile.

“We assess that the ship is able to make its own way, and it is doing that; it’s heading more towards, now, we think the east. We think it’s probably going to be putting in at Sevastopol for repairs,” Kirby told CNN.

Loss of the 11,490-ton ship is a serious blow to the Russian navy’s prestige and national pride. It also comes as the navy is reportedly preparing to support ground forces for a new offensive in eastern Ukraine. 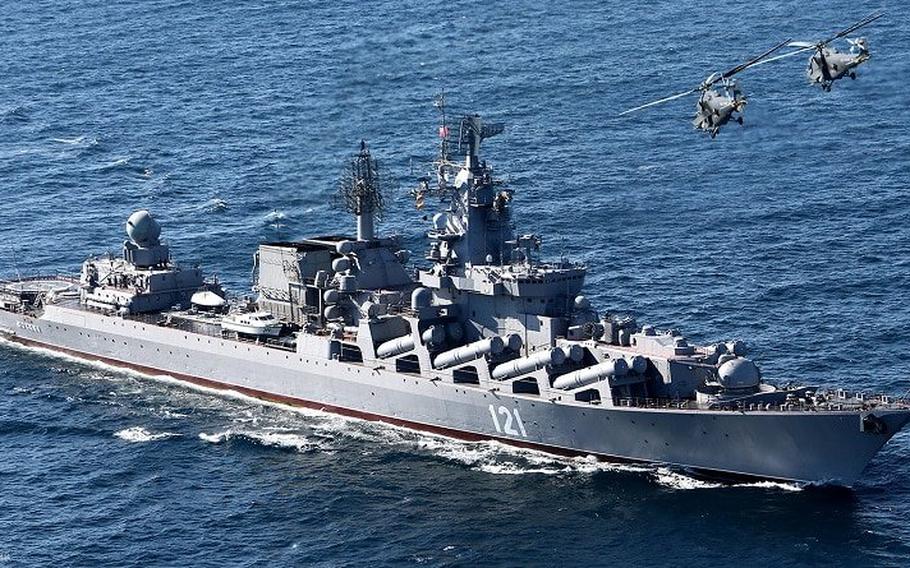 The Russian Black Sea Fleet flagship cruiser Moskva, as seen in 2009. Ukraine says its forces struck the ship with missiles on April 13, 2022. Russia confirmed the crew had to evacuate the ship because of a fire and detonating ammunition, but did not give further details. (Russian Defense Ministry)

Throughout the war, Russian navy ships have launched cruise missiles, enforced a blockade in the northern Black Sea and supported small-scale amphibious assaults.

Moskva was reported to be one of two ships involved in the takeover of Snake Island in the opening days of the full-scale invasion in late February.

A Ukrainian guard at the Black Sea outcropping near the Danube delta, called Zmiinyi Island in Ukrainian, famously said “Go f--- yourself” when the Russians demanded the unit’s surrender.

All the guards on Snake Island were originally thought to have been killed, but it was later determined that Russia had captured them. They were released in a prisoner swap in late March, according to news reports.

Analysts using satellite imagery have reported the Moskva’s presence in the northern Black Sea, which includes Snake Island, throughout the war.

“It has been confirmed that the missile cruiser ‘Moscow’ today went exactly where it was sent by our border guards on Snake Island,” Marchenko said in a Wednesday post to his account on the social media platform Telegram. “Neptune missiles guarding the Black Sea caused very serious damage to the Russian ship.”

If that proves true, the destruction of the Moskva would be the second successful Ukrainian attack on a Russian ship in the past month.

Open-source intelligence analysts on Twitter reported March 24 that a Russian Alligator-class landing ship, likely the Saratov, in port at Berdyansk on the Sea of Azov had caught fire, potentially because of a strike by a Ukrainian missile. 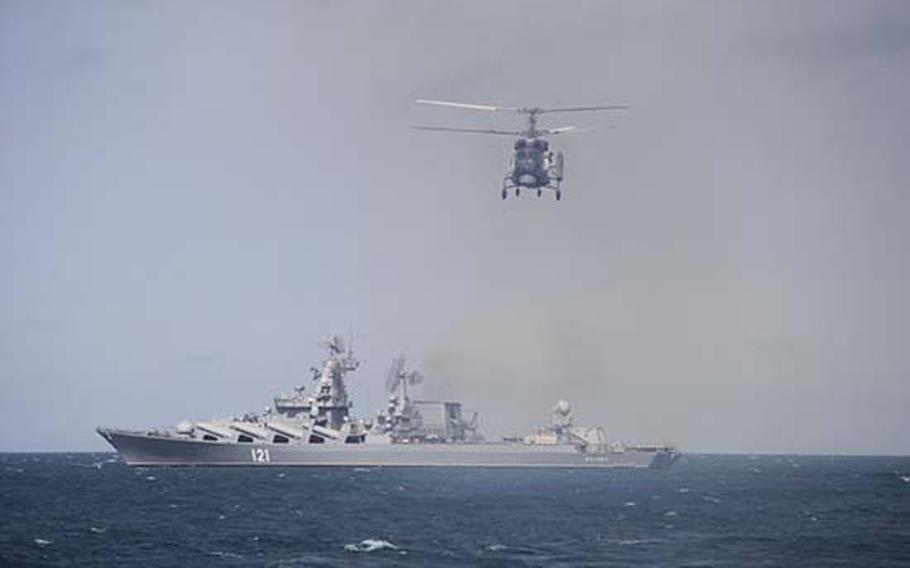 The Russian missile cruiser Moskva, or Moscow, as seen during battle drills in the Black Sea, September 2021. Ukraine says its forces struck the ship with missiles on April 13, 2022. Russia confirmed the crew had to evacuate the ship because of an a fire and resulting ammunition detonating, but did not give further details. (Russian Defense Ministry)

Neptune anti-ship missiles recently were developed by Ukraine, based on an earlier Soviet design, The Associated Press reported Thursday. The missiles are truck-mounted and have a strike range of up to 175 miles, according to the report.

The system, some analysts said Thursday, could be a game changer for Ukraine in its effort to defend its coastline, potentially making it possible for ground troops protecting Odesa to detach and fight in eastern Ukraine.

“If the Moskva and Saratov incidents were the result of Ukrainian strikes, we can now safely say that Ukraine has the means to attack and disrupt an amphibious landing near Odessa,” tweeted Frederik Van Lokeren, a former Belgian navy officer and naval analyst studying the Russian navy.

The Moskva was put into operation in 1983, receiving its current name in 1996, the Russian News Agency Tass reported Thursday. In 2018-2020, it underwent significant repairs and modernization, RIA said.

It is the lead ship of Project 1164 Atlant and is armed with 16 Yakhont cruise missile launchers, an AK-130 artillery system and an S-300F Fort anti-aircraft missile system, among other defense and artillery systems, according to RIA.

Two other Russian cruisers — the Marshal Ustinov in the Northern Fleet and the Varyag, flagship of the Pacific Fleet — are part of the same project, RIA reported. Those ships were last sighted sailing near Crete and Cyprus, respectively, according to OSINT analysts.

The USS Harry S. Truman carrier strike group recently was ordered by Defense Secretary Lloyd Austin to stay in or near the Mediterranean. It was last reported sailing in the Ionian Sea, according to the USNI News fleet tracker.