Pentagon: Russian troops have left Kyiv and Chernihiv but have not yet moved to eastern Ukraine 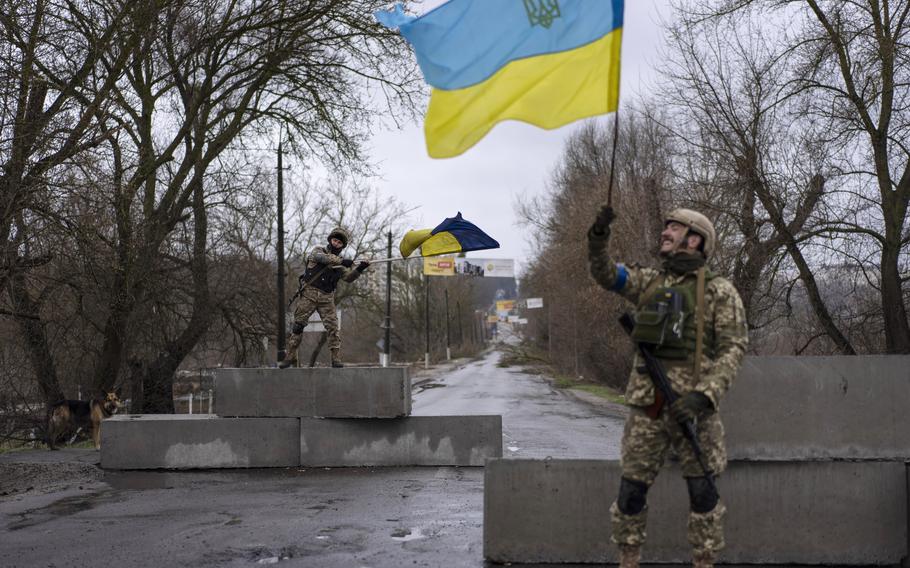 Ukrainian soldiers celebrate at a check point in Bucha, in the outskirts of Kyiv, Ukraine, April 3, 2022. (Rodrigo Abd/AP)

WASHINGTON — Russian ground forces have pulled back from the Ukrainian cities of Kyiv and Chernihiv but have not yet redeployed to the eastern region of the country, a senior U.S. defense official said Wednesday.

The roughly 40 Russian fast-response ground units — each made up of about 800-1,000 troops — that once surrounded the northern Ukrainian cities have returned to neighboring Belarus, said the official who spoke on condition of anonymity.

About 80 of the roughly 130 units — known as battalion tactical groups — that Russia sent into Ukraine at the start of the invasion in late February remain in the country, the official said.

Since Friday, U.S. defense officials have predicted that withdrawing Russian forces will regroup, resupply and reinforce the units in Belarus and return to Ukraine, this time focused on the eastern separatist region of Donbas.

As of Wednesday none have returned, though “we've seen indications that they're beginning to refit and resupply the units,” the official said. “Our assessment is that [Russia] won't want to spend too much time on refit and resupply because they have made a very public show of saying that they're going to prioritize their efforts on the Donbas region.”

However, Russian mercenaries have been spotted in Donbas and Russia has “prioritize[d] their airstrikes more and more” on Ukrainian operations in the region and the nearby city of Izyum, the official said.

Izyum, which is in the Kharkiv region, “is important in organizing the defense of ... the Donetsk region [in the Donbas],” the Ukrainian military said in a statement Friday announcing Russia had gained control of the city.

The new focus on eastern Ukraine could "extend the conflict longer than anybody wants to see it go," chief Pentagon spokesman John Kirby said Wednesday.

"The fact that [Russian President Vladimir Putin is] going to concentrate in a smaller geographic area certainly presents the possibility that the violence will continue. It could even intensify in that part of Ukraine," he said.

"Look at what they've been able to do just thus far: Mr. Putin has achieved exactly zero of his strategic objectives inside Ukraine. He didn't take Kyiv. He didn't topple the government. He didn't remove Ukraine as a nation state," he said. "I think the proof [that Ukraine can win] is literally in the outcomes that you're seeing every day the Ukrainians are bravely fighting for their country."

Despite the withdrawing Russian ground forces from Kyiv and Chernihiv, Kyiv remains at risk for attack though the “threat of ground invasion is clearly gone for the moment,” the defense official said.

"Even though we haven't seen a lot of airstrikes there in the last 24 [hours,] that doesn't mean that the Russians still couldn't hit Kyiv,” the official said. “It's not like Kyiv is just somehow immune from further attack.”

It remains unclear why Russia is focusing on Donbas, the official said. The Pentagon believes Putin at first wanted to topple the government in Kyiv. But his troops faced weeks of stagnation due to supply issues and Ukrainian resistance.

"The Russians are clearly reprioritizing in the east, but it's not clear what their longer-range goals are here,” the official said. “Are they just wanting Donbas [for] a negotiating chip at the table? Do they just want the Donbas in the southern part of Ukraine? Is that the end goal?"

Days before the war, Russian parliament declared the Donbas-region cities of Luhansk and Donetsk “independent” of Ukraine. The Russian Defense Ministry last week claimed the goal all along had been to “liberate” the region.

However, the U.S. rejected that notion, with a senior U.S. defense official on Tuesday calling the shift in focus part of “classic Russian behavior” in attempt to save face in the public sphere.