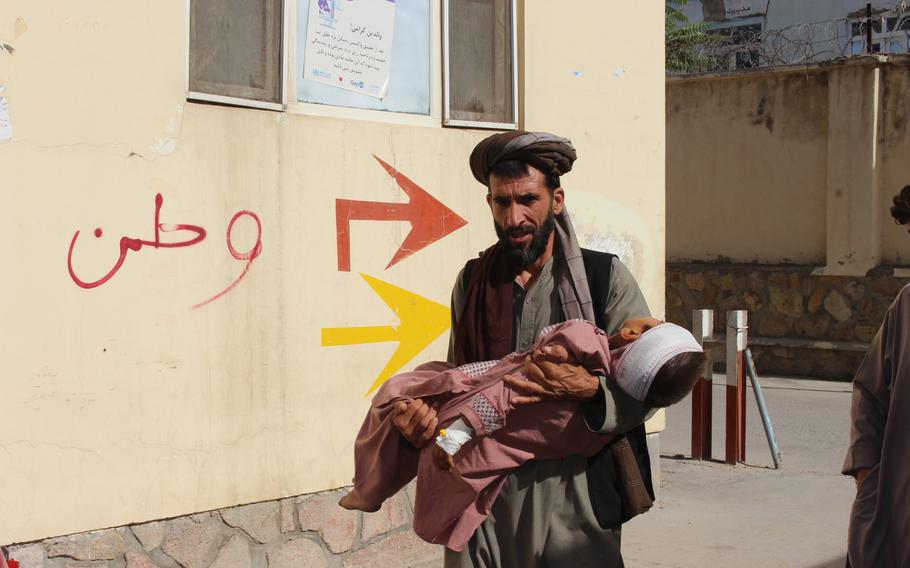 An Afghan civilian carry a wounded child to the hospital after he was injured during fighting between Taliban and government in Badghis province, northwest of Afghanistan, Wednesday, July 7, 2021. (Mirwis Omari/AP)

WASHINGTON — The Biden administration has mounted a last-ditch effort this week to convince the Taliban, as it continues its relentless march across Afghanistan, that the world will reject it if it takes over the entire country by force.

In the largest such gathering since U.S.-Taliban talks began nearly two years ago, representatives from Russia, China, Afghanistan’s regional neighbors, European powers, the European Union, the Organization of Islamic Cooperation and the United Nations have converged on Doha, Qatar, for U.S.-led meetings with the militants.

The hope is that sheer numbers and a unified stance — both during the Taliban meetings and in a tough joint statement to be issued after their last session Thursday — will disabuse the militants of any notion that there are cracks in international resolve to cut any Taliban government off from all diplomatic contact and assistance.

Russia, China, Iran and others in the region have recently hosted delegations of senior Taliban officials, treating them as “diplomats, as a kind of hedge,” said a senior Biden administration official, one of several U.S. and European officials who spoke on the condition of anonymity because they weren’t authorized to discuss the sensitive diplomacy.

“They all condemn it and say it is not in their interest,” the official said of a Taliban takeover. “Now is the moment we will see how much they’re willing to press for” a negotiated political solution “and to really signal to the Taliban that that’s the expectation.” Iran was invited but chose not to attend.

But the fear, even if the international community can speak with one voice, is that it is already too late.

In an offensive launched as U.S. and other foreign troops began to withdraw just a few months ago, the militants have changed the map of Afghanistan to one of small, largely urban pockets of government control, surrounded by huge swaths of territory they have conquered or accepted in surrender.

Eight of 34 provincial capitals have fallen with stunning speed in the last week alone. A U.S. intelligence assessment in June that Kabul could be overrun within six to 12 months has now been revised to 30 to 90 days. On Saturday, the U.S. Embassy there issued an urgent alert telling American citizens there to leave the country “immediately,” however they can. No one should count on government flights, it warned, and the embassy’s ability to assist them “is extremely limited, even in Kabul.”

Nearly all embassies have reduced their staffs, and some have closed their diplomatic missions. The United States has yet to complete the details of an agreement it says it has reached with Turkey to provide security at the Kabul international airport — the only likely way out in the event of a direct Taliban attack on Kabul — once the U.S. military withdrawal is complete by the end of this month. Military planners are working on a short-notice evacuation plan, should it become necessary.

Germany, Canada and other nations that participated in the NATO coalition in Afghanistan have joined the United States in efforts to provide visas and evacuations for Afghan interpreters and others who assisted their efforts. Some European Union countries have at least temporarily suspended all deportations of Afghans, including the Netherlands and Germany, where nearly 30,000 Afghans are under deportation orders.

At least six EU nations, however, have argued in writing that such actions send the wrong message and encourage Afghan migrants — who have already flooded neighboring countries by the tens of thousands in recent days — to try to make their way to Europe.

In a statement to reporters in Doha on Wednesday, following numerous reports of atrocities against civilians, Taliban spokesperson Zabiullah Mujahid said that the militants were “committed to protecting the places, property and lives of the people and even foreigners living in Afghanistan” and that anyone attacking “international embassies and institutions will be punished.”

Just hours earlier on Twitter, Mujahid exulted that the Taliban had completed its takeover of Kunduz province with the capture of its airport, including an assortment of vehicles and aircraft.

The Taliban has also moved forward in its assault on the northern city of Mazar-e Sharif, where Afghan President Ashraf Ghani visited Wednesday in an attempt to rally dispirited Afghan military forces and promote the deployment of citizen militias to defend highways, bridges and their homes.

The militias — including well-armed private armies led by traditional warlords — have largely held their fire, despite the widespread belief they are girding for civil war against the Taliban. Ghani was expected to hold meetings with two of the most prominent northern strongmen - Attah Mohammed Noor and Abdurrashid Dostum.

Ghani’s government — also represented at the Doha talks — seems to be in a tailspin, as he has increasingly relied on an ever-smaller circle of advisers. This week, Ghani reportedly replaced both the army chief of staff and the commander for the special operation corps. His finance minister resigned and left the country.

As the Biden administration has been bombarded with questions from the media and lawmakers about what is happening in Afghanistan, and what it plans to do about it, it has increasingly thrown up its hands and questioned Afghan resolve.

“They’ve got to want to fight,” President Joe Biden said Tuesday, noting that the U.S. armed and trained Afghanistan military forces outnumber the Taliban by about three to one.

His remarks seemed to form the basis of all administration responses on Wednesday. “It really is going to come down to their leadership,” Pentagon spokesperson John Kirby told reporters. “They have the advantage in numbers, in operational structure, in air forces and modern weaponry, and it’s really about having the will and the leadership to use those advantages to their own benefit.”

“They have what they need,” said White House spokesperson Jen Psaki. “What they need to determine is if they have the political will to fight back, and if the have the ability to unite as leaders to fight back - and that’s really where it stands at this point.”

The administration has long been disappointed in Ghani’s leadership and blames him for much of the foot-dragging in months of sputtering inter-Afghan talks — when the government at least had the leverage of a U.S. troop presence — preceding Biden’s withdrawal announcement.

A U.S. peace proposal in March suggested a transitional government, whose leader would be chosen with consent of both sides. Although the plan was seen as a non-starter for myriad reasons, Ghani insisted he would not step down and the Taliban refused to sign any deal with Ghani.

Participants in this week’s Doha talks are also meeting with government representatives and encouraging both sides to return to the negotiating table for meaningful talks. But the spotlight is clearly on the Taliban.

At separate meetings Tuesday with the U.N., EU, China, Uzbekistan and U.S. envoy Zalmay Khalilzad (Russia had flight problems and didn’t arrive in time), the two sides presented their cases. The Taliban said it was the government that had refused earlier cease-fire offers, complained about what it said was government bombing of civilians, and demanded the lifting of sanctions against some of its leaders and a prisoner release. The government said it was in no mood to reward violent behavior by the militants.

On Wednesday, the United States, Russia, China and Pakistan went through the same exercise. Both Beijing and Moscow are wary; they have publicly stated that the violence must be stopped but are perceived by the administration, at least, as less interested in who governs Afghanistan than that it be stable.

Pakistan has the same concern and insists its past recognition of the Taliban is no longer operable. Concerned about adding to the 3.5 million Afghan refugees it already hosts and worried about its economic future, it pushed hard for the Doha meeting.

On Thursday, a larger group will include Germany, Norway, the United Kingdom, the Organization of Islamic Cooperation and others, and a hoped-for joint declaration from all participants.

“We are clear that the international community needs to unite to give the Taliban a clear message about their future if they pursue their military campaign,” said a British official.

“They will be international pariahs if they seize power by force; they will not get international aid if they do not respect human rights and the developments which Afghans have come to expect and value over the last 20 years.”