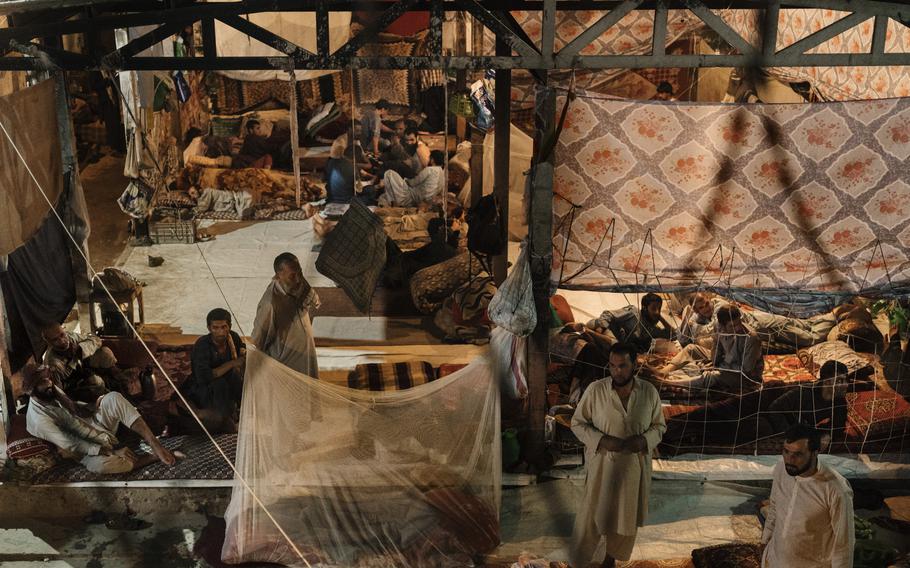 Hundreds of inmates are held inside the central prison in Kunduz, Afghanistan. (Lorenzo Tugnoli/For The Washington Post)

KABUL, Afghanistan — The Taliban overran three provincial capitals in Afghanistan on Sunday, including the strategic northern city of Kunduz, officials said. They are the latest in a string of battlefield wins by the insurgents, who have stepped up attacks as American troops withdraw from the country.

Kunduz — a key commercial hub with a population of more than 350,000 people and capital of a province with the same name — is the biggest city to fall to the Taliban since the withdrawal of international forces began in May.

The Taliban released inmates from the local prison after entering the city, while offices of the provincial governor and police chief were evacuated, Maj. Abdul Hadi, a spokesman for the Afghan military in Kunduz, told Stars and Stripes.

Heavy fighting between Taliban fighters and Afghan security forces continued throughout the day, according to witnesses.

"The problem is that the enemy is hiding in people's houses and it is hard to target them, because of civilians,” Hadi said.

All government facilities but the city’s airport and main army barracks had fallen to the Taliban as of Sunday afternoon, provincial council member Abdul Ahad Torial Kakar said in a telephone interview. But fighting around the airport was ongoing, Kakar said.

The Taliban seized Kunduz for about two weeks in 2015, but eventually withdrew after the U.S. began airstrikes. The insurgents entered the city center for a brief period a year later before being driven out again.

“No government forces are left in Taleqan, which fell late in the afternoon,” provincial council member Mir Ahmad Qasim said.

And Sar-e-Pul, the capital of another northern province with the same name, was a third provincial capital to fall to the Taliban the same day.

After Taliban fighters seized control in the morning, they set fire to government buildings, Masooma Shadab, a former lawmaker from the province, told Stars and Stripes.

"Many residents have been killed in the city, but no one can go and retrieve the dead bodies from the streets because everyone is afraid of the Taliban,” Shadab said in a telephone interview.

Maulavi Noor Mohammad Baig, a provincial council member in Sar-e-Pul, also confirmed the fall of the province, and called on Kabul to send in reinforcements.

The fall of the three provincial capitals came a day after the Taliban overtook Sheberghan, the capital of northern Jawzjan province. And on Friday, Taliban fighters seized Zaranj in western Nimroz province, the first provincial capital to fall to the insurgents since U.S. and international forces began withdrawing from Afghanistan.

Afghanistan’s Interior Ministry has attempted to play down the Taliban advances, saying Afghan forces continue to fight to regain full control of the provincial capitals.

The fighting comes after the bulk of U.S. and foreign troops have already been pulled out of the country. Those remaining are set to leave by Aug. 31.

The U.S. military continues to conduct airstrikes against the Taliban to support Afghan forces in the waning days of the war. But it’s not clear if these strikes will continue once the drawdown is complete. Military officials have previously said future “over-the-horizon” support will target terrorist groups like al-Qaida and Islamic State, but not necessarily the Taliban.

While the Taliban have seized control of large swaths of rural territory since their latest offensive began in May, they have largely avoided urban areas until recently. Fighting in cities like Herat and Lashkar Gah — the capital of Helmand province — is ongoing.

On Saturday, the United Nations’ special envoy for Afghanistan asked the U.N. Security Council to issue a declaration calling for an end to attacks on Afghan cities.

Afghanistan is at a “dangerous turning point” as the U.S. is about to depart, and a shift to urban fighting would likely result in “massive casualties” and damage to infrastructure, Deborah Lyons said in a statement.

"This is a different kind of war, reminiscent of Syria recently or Sarajevo in the not-so-distant past," Lyons said.