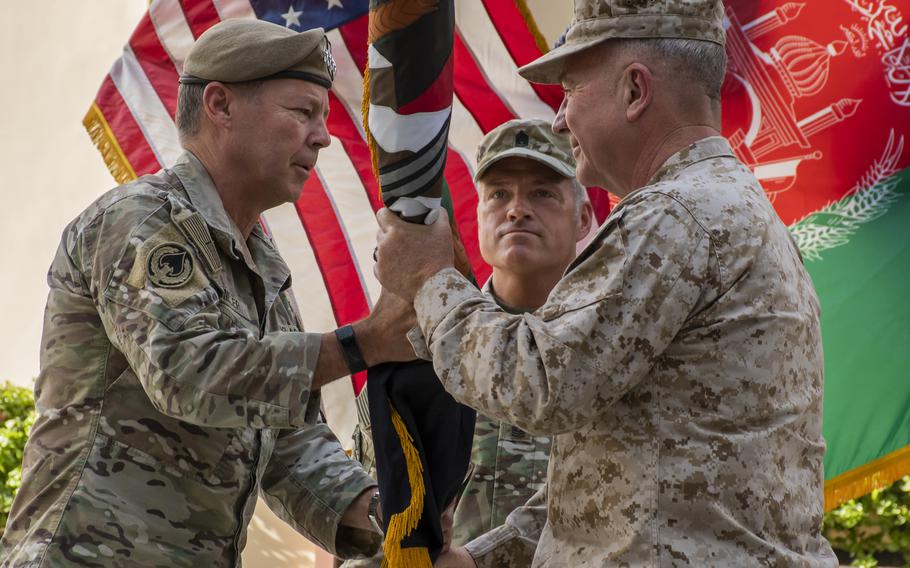 KABUL, Afghanistan — Marine Gen. Frank McKenzie took charge of the remaining U.S. forces in Afghanistan during a ceremony Monday, relieving the longest-serving U.S. commander as the military’s withdrawal nears its end and Taliban forces continue their attacks throughout the country.

McKenzie took over from Army Gen. Austin “Scott” Miller, whose nearly three years in command made him the longest-tenured leader since the war began in 2001.

McKenzie attempted to reassure Afghan officials at the ceremony that the U.S. will continue to help Afghanistan, even after most troops leave.

“It’s not the end of the story, rather it’s the end of a chapter,” McKenzie said. “You can count on our support in the dangerous and difficult days ahead.”

Miller thanked U.S. allies for their service, noting that most have already left the country. Only the flags of the U.S., the United Kingdom and Turkey remained flying Monday at former NATO Resolute Support headquarters, which is now part of the U.S. Embassy complex.

Miller also called for the Taliban to pull back on fighting.

“We can all see the violence that’s taking place across the country,” Miller said, adding that the fighting makes a negotiated settlement difficult.

The plan to transfer authority to McKenzie, who leads U.S. Central Command, had been announced by Pentagon officials earlier this month. 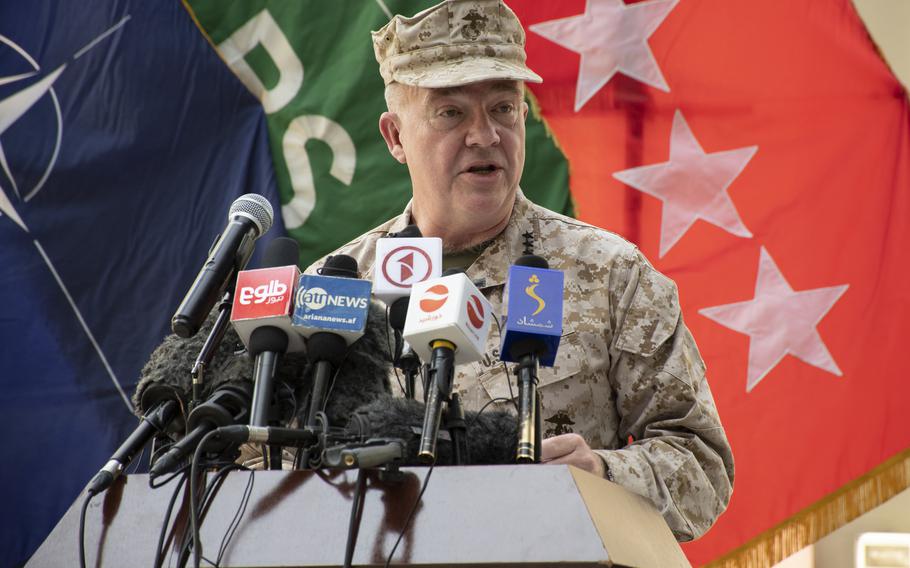 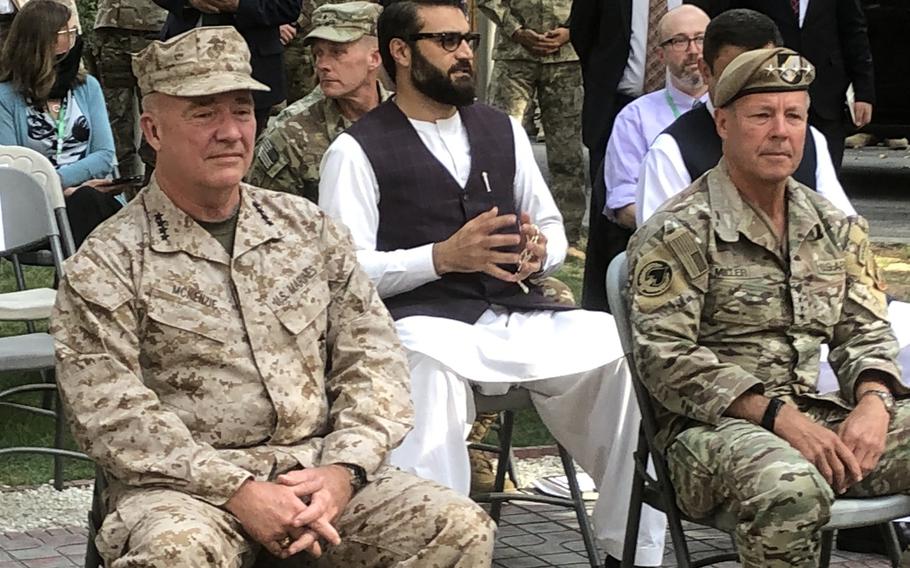 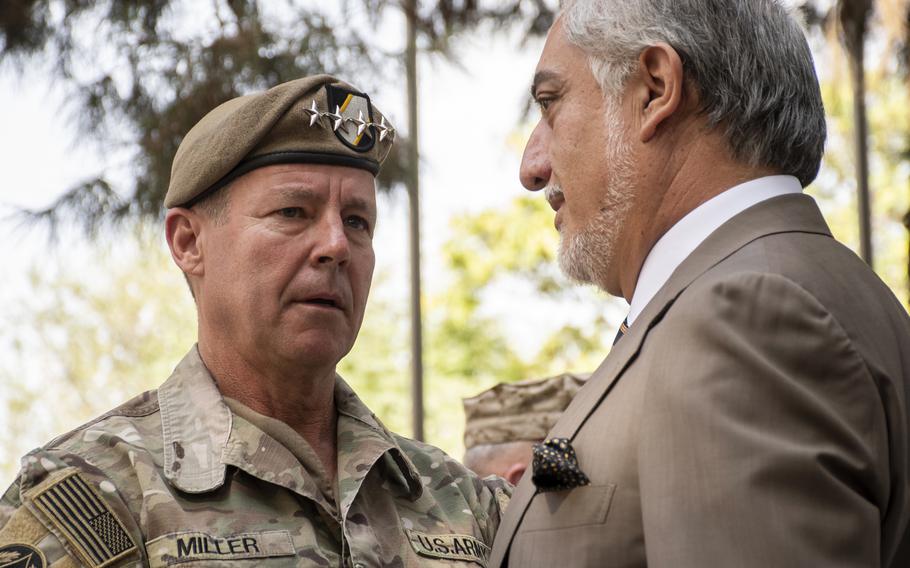 Buy Photo
Gen. Scott Miller, left, speaks with Abdullah Abdullah, the head of the Afghanistans High Council for National Reconciliation, on July 12, 2021. The two were speaking at a ceremony at which Miller relinquished command of United States Forces-Afghanistan and NATOs Resolute Support mission. (Phillip Walter Wellman/Stars and Stripes) 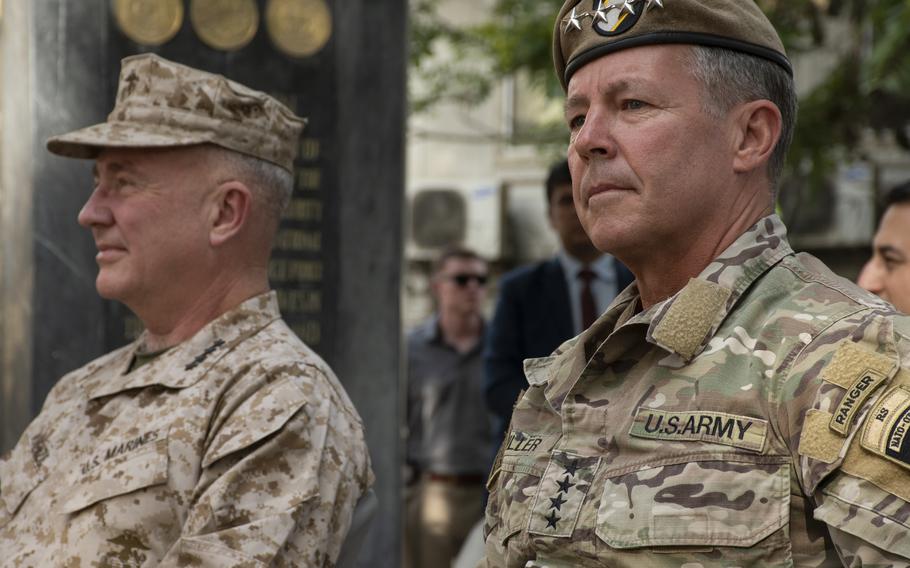 The change in leadership from Miller to McKenzie is part of the drawdown, “reflecting a smaller U.S. force presence in Afghanistan,” Pentagon spokesman John Kirby said.

More than 90% of the U.S. withdrawal from Afghanistan is complete, CENTCOM said. It will be concluded by the end of August, President Joe Biden said last week.

McKenzie will have the authority to conduct counterterrorism operations against threats to America from Afghanistan, he said at the ceremony. He will also be charged with developing plans to provide besieged Afghan forces with logistical, financial and technical support after U.S. troops leave.

The Pentagon also approved a new command for American forces who will protect diplomats after the U.S. military drawdown ends.

The Kabul-based command will be led by Rear Adm. Peter Vasely, a two-star Navy SEAL. The troops at the embassy also will help with security requirements at the capital’s Hamid Karzai International Airport.

Miller, 61, played a key role in a historic 2020 peace deal with the Taliban and has overseen a U.S. drawdown amid rising violence among Afghans.

Under the Army general’s command, transparency about U.S. actions in the war shrunk while territory under Taliban control grew to reach the highest level since the U.S. arrival nearly 20 years ago.

Miller repeatedly admonished the Taliban to “reduce their violence around the country.” Although the fighters largely refrained from attacking foreign troops following the 2020 peace agreement, they ramped up attacks on Afghan government troops. Afghanistan now stands at risk of civil war, Miller told reporters last month.