A timeline of important moments at Bagram Airfield from 2001-2021 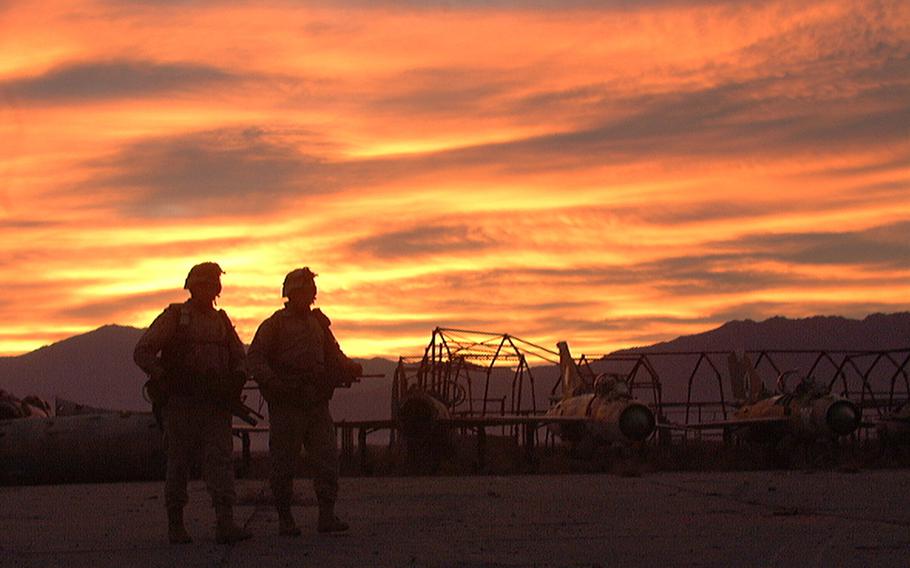 Buy Photo
Two 10th Mountain Division soldiers head out for an early morning patrol at Bagram Airfield, Afghanistan, in December 2001. It was announced July 2, 2021, that the last U.S. troops had left Bagram, nearly 20 years after they first arrived. (Stars and Stripes)

The following recounts some of the important moments at Bagram Airfield, which served as the largest U.S. base in Afghanistan for much of the war since it began in 2001:

December 2001 – More than 300 troops, mainly with the 10th Mountain Division, provide force protection at the base. 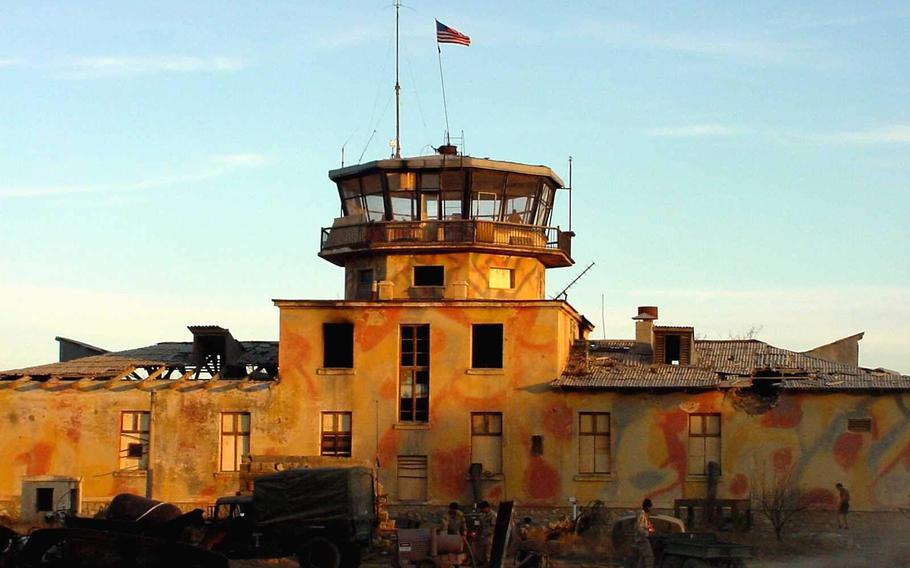 The old Russian control tower as it appeared when the first U.S. forces arrived on Bagram Airfield in December 2001. (U.S. Air Force)

February 2002 – Spc. Jason Disney, a vehicle repairer and welder with the 7th Transportation Battalion’s 58th Maintenance Company out of Fort Bragg, N.C., dies in an industrial welding accident. The main road at the base is named in his honor. 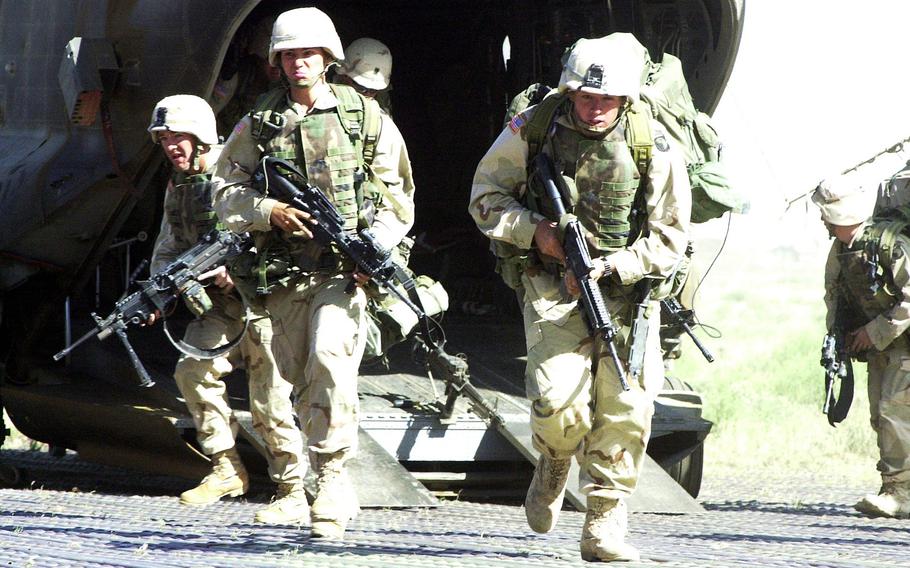 Buy Photo
Troops from the 101st Airborne Division in Afghanistan rehearse combat drills at Bagram Airfield in May 2002. (Stars and Stripes) 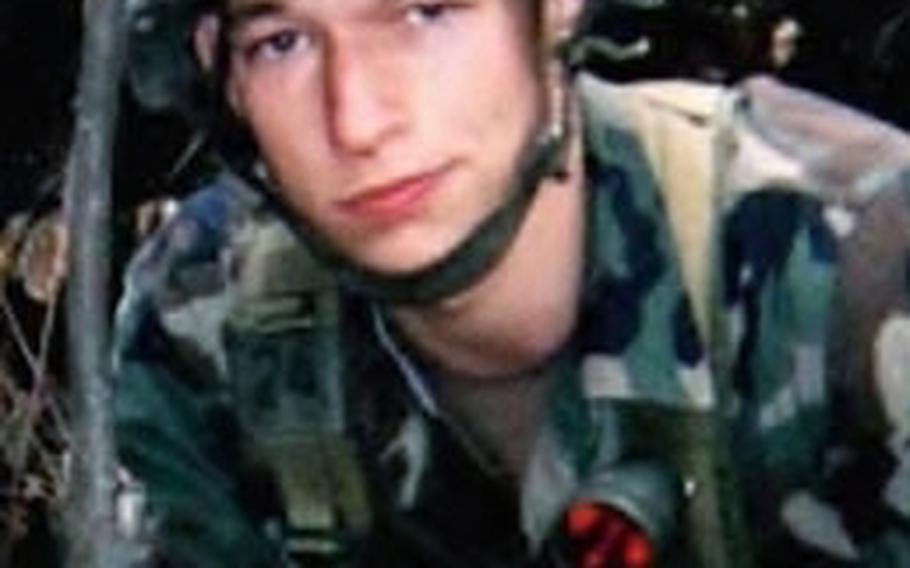 Spc. Jason Disney, a soldier with the 7th Transportation Battalion, Fort Bragg, N.C. who died at Bagram Airfield, Afghanistan on Feb. 13, 2002. The main road that ran through the base was named after him. (Disney family)

March 2005 – The military announces it is spending $83 million on its two air bases in Afghanistan, Bagram and Kandahar Airfield. 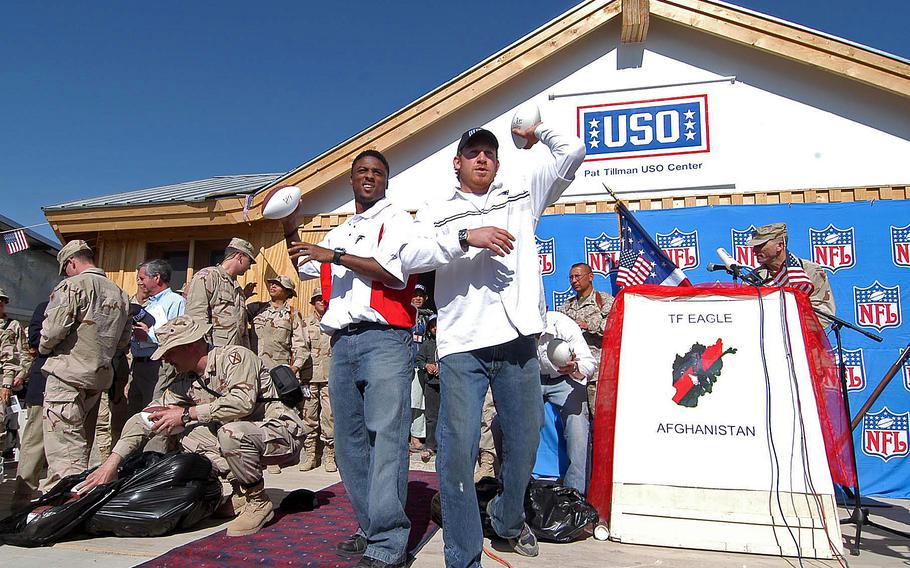 Buy Photo
Atlanta Falcon Warrick Dunn, left, and New England Patriot Larry Izzo toss out autographed footballs to the troops before the ribbon-cutting ceremony to open the Pat Tillman USO Center on Bagram Airfield, in April 2005. The center is dedicated to the former NFL player killed in action while serving in Afghanistan in 2004. (Michael Abrams/Stars and Stripes) 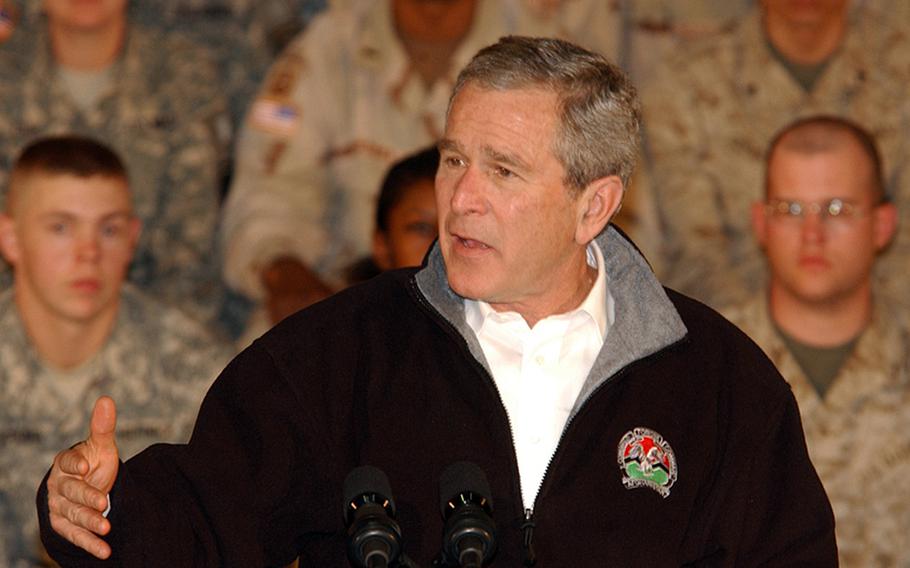 President George W. Bush speaks to a crowd of troops during a surprise visit to Bagram Airfield, Afghanistan, March 1, 2006. Bush thanked the troops for their service and assured them they are making strides towards democracy in Afghanistan. (Brian Schroeder/U.S. Army)

March 2006 – President George W. Bush makes a surprise visit and delivers a speech to troops, assuring them they are making strides toward democracy in Afghanistan. 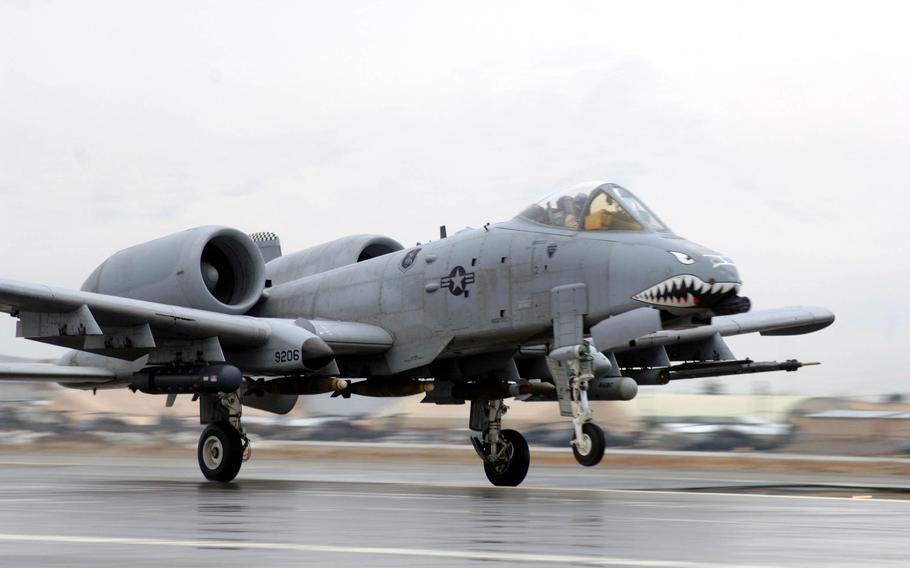 An A-10 Thunderbolt II assigned to the 455th Air Expeditionary Wing lifts off the new runway, opened Dec. 20, 2006. The runway was 2,000 feet longer than the previous runway and could support all of the aircraft in the U.S. inventory. (Joseph Kapinos/U.S. Air Force) A trove of trinkets shimmer in the glass cabinets of an Army and Air Force Exchange Service shop at Bagram Airfield, Afghanistan in 2006. (Mary L. Gonzalez/U.S. Army)

February 2007 – A suicide attack at a security gate kills 23 people and injures 20 more. The attack was claimed by the Taliban and happened while Vice President Dick Cheney was visiting.

July 2007 – The base resembles a small town, with traffic jams and various retail and food outlets, including Burger King, Subway and Pizza Hut. Dallas Cowboys cheerleaders dance for service members during the sergeant major of the Army's 2007 "Hope and Freedom" tour Dec. 23 at Bagram Airfield. Over the years, many performers visited the troops at Bagram, mostly with USO tours. (Timothy Dinneen/U.S. Army)

December 2008 – President George W. Bush makes his final visit to the base.

June 2009 – Two U.S. soldiers are killed and at least six others wounded during an early morning rocket attack.

October 2009 – More than $200 million in construction projects — from dormitories to cargo-holding yards — are either underway or planned on the Air Force side of the base.

November 2009 – Construction of the Parwan Detention Facility, adjacent to the base, is completed. It houses 3,000 inmates. 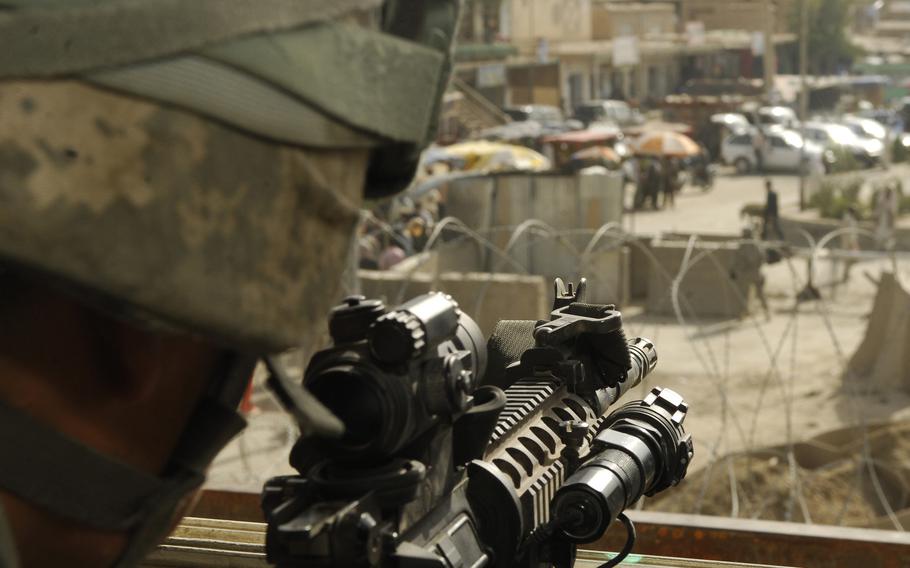 May 2010 – About a dozen insurgents attack Bagram’s north end, killing one American contractor and wounding nine service members. The attackers were dressed in U.S. Army uniforms. 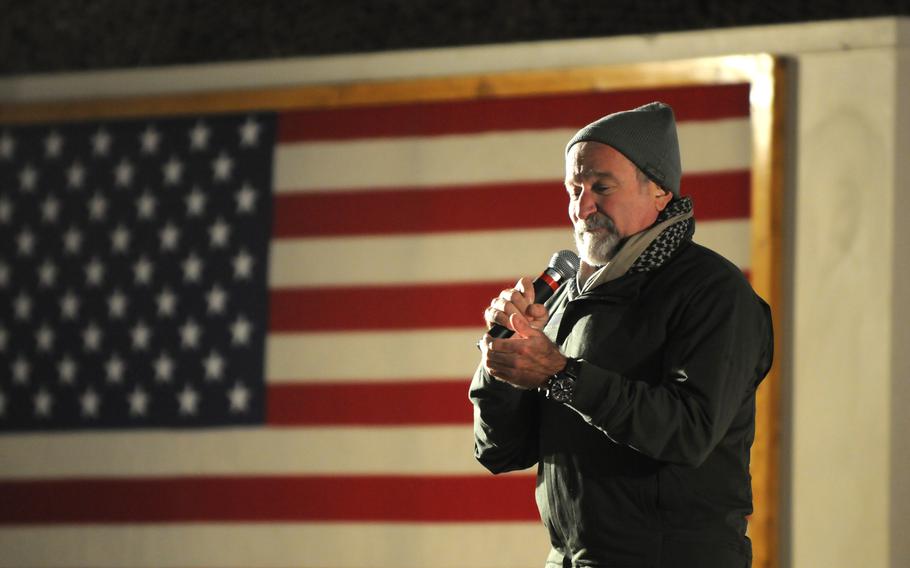 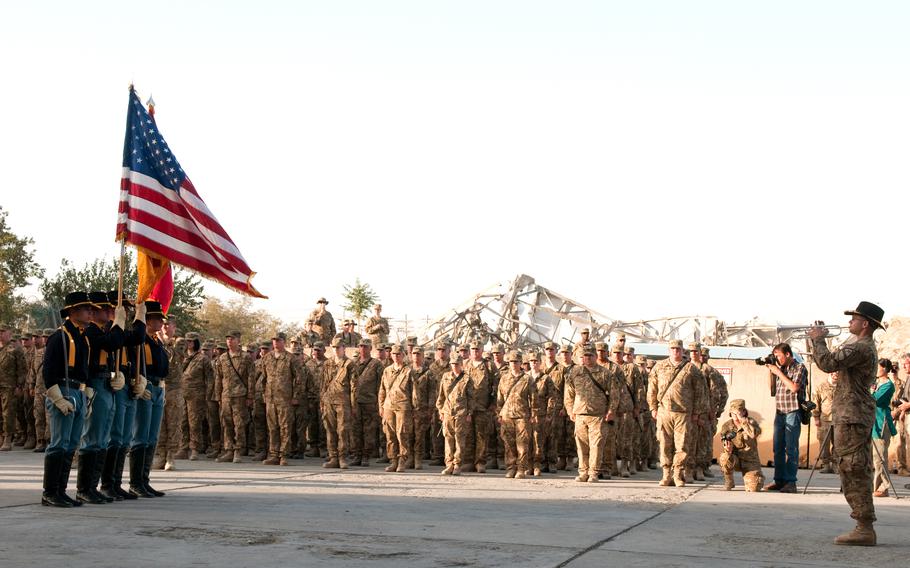 A 1st Cavalry Division bugler relays commands to the color guard during a ceremony in Bagram Airfield, Afghanistan, Sept. 11, 2011, remembering the attacks of 9/11. (Brandon Pomrenke/U.S. Army)

February 2012 – Hundreds of Afghans hold violent protests against the burning of Qurans at the base. The U.S. Embassy in Kabul goes into lockdown because of the protests.

May 2012 - President Barack Obama visits, tells troops there will still be “heartbreak, pain and difficulty ahead.” 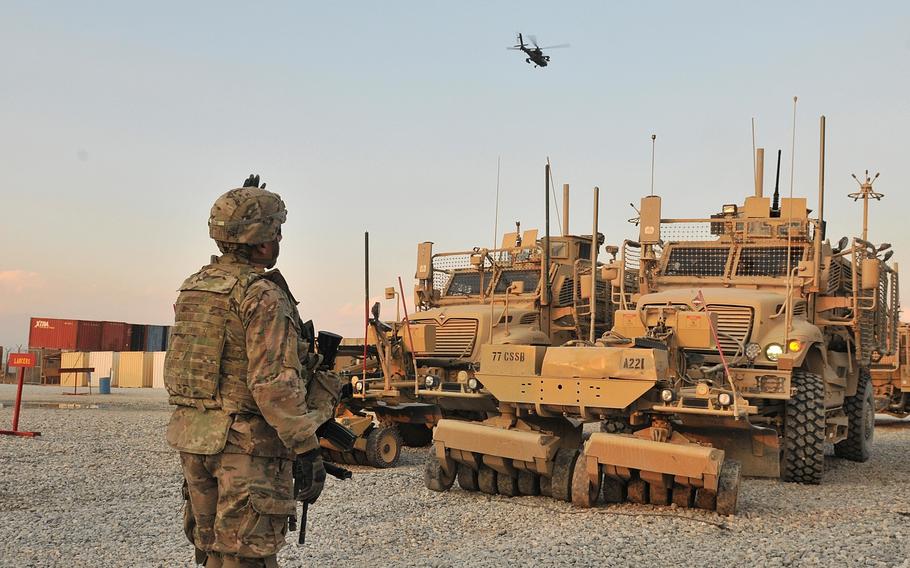 Staff Sgt. Jose A. Antepara guides a vehicle at Bagram Airfield, Afghanistan, as part of preparation for an upcoming mission in December 2013. (U.S. Army)

May 2014 – Obama visits again, gives speech lauding troops for making sure that “America’s war in Afghanistan will come to a responsible end.”

June 2014 – The military says Bagram is “the busiest single runway airfield” used by the Defense Department. Forty-six types of aircraft are used and there is an average of more than 700 operations a day. 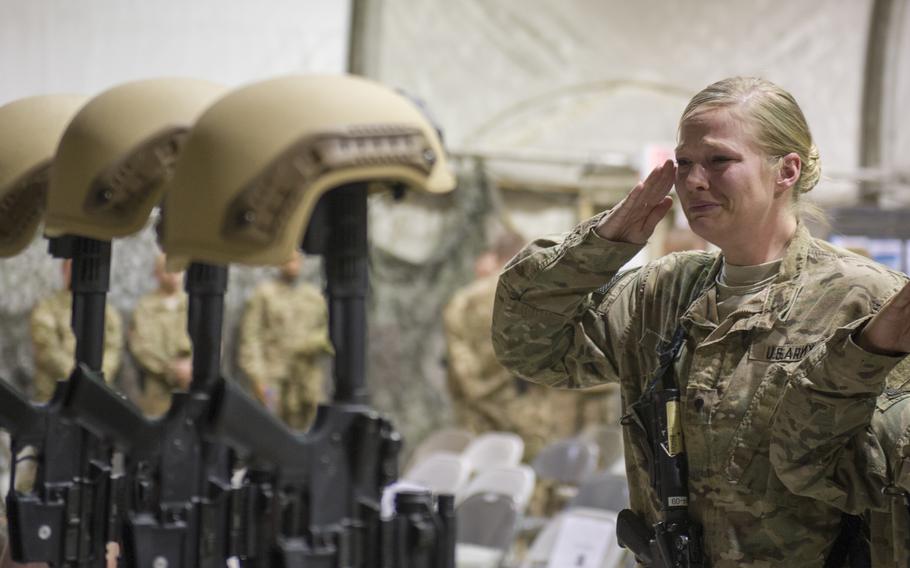 December 2015 – A suicide bomber on a motorcycle kills six American troops in an attack near the base.

November 2016 – An Afghan contractor conducts a suicide bombing on Bagram and kills four Americans, injures 17 others.

December 2018 – Airstrikes continue to increase. The Trump administration says it is part of a plan to bring the Taliban into peace negotiations under favorable terms. 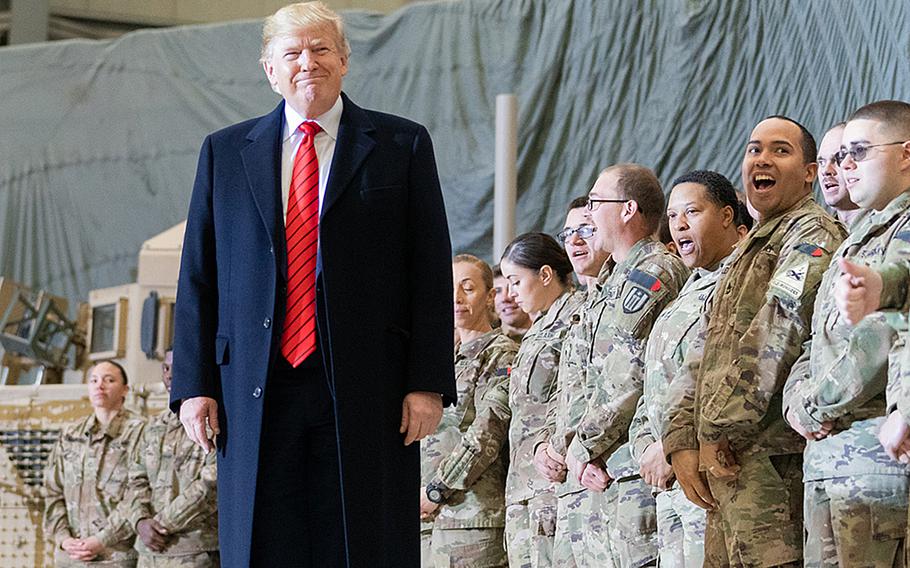 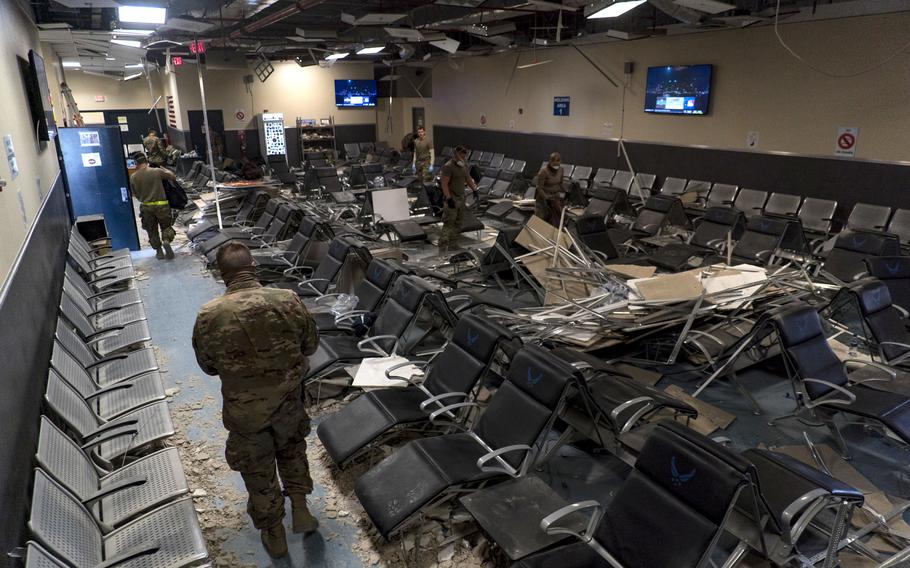 April 2019 – Three Marines are killed, three others injured and a contractor wounded by a roadside bomb near the base. The Taliban claim responsibility.

December 2019 – A suicide bomber targets a medical facility under construction adjacent to the base, killing two Afghan civilians and wounding dozens of others. There are no U.S. casualties. 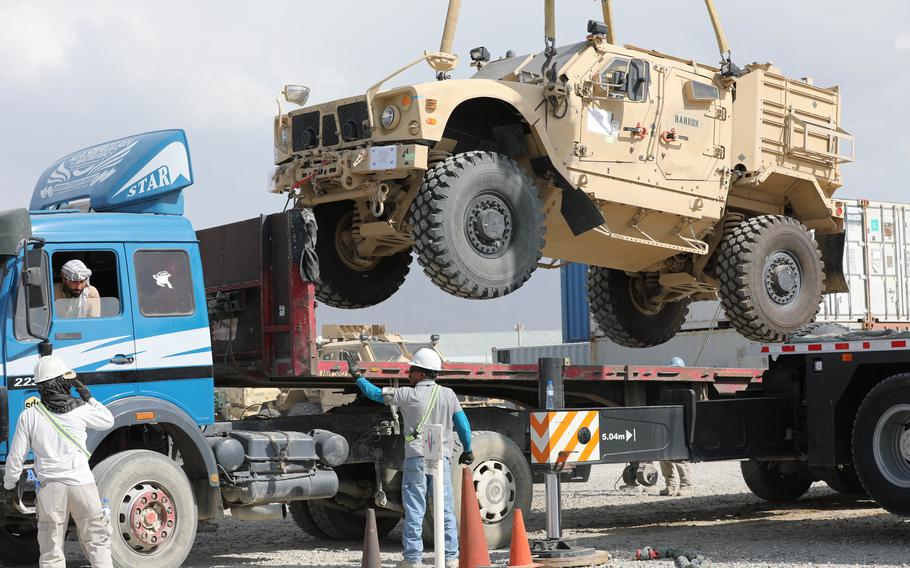 February 2020 — The U.S. and the Taliban sign a peace agreement that would lead to international forces leaving Afghanistan in mid-2021.

March 2020 – Quarantine areas are set up on Bagram to prevent the spread of the coronavirus.

May 2021 — Several thousand troops have left the country through Bagram since the signing of the agreement. U.S. begins its full withdrawal from the country.

July 2021 – The U.S. leaves Bagram Airfield and turns it over to Afghan forces.