US leaves Bagram Airfield as America winds down its longest war 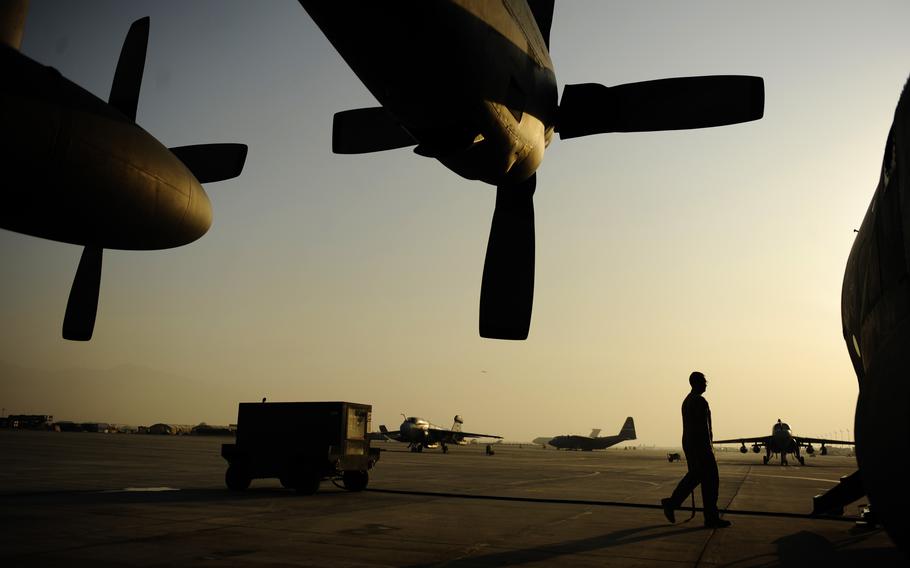 KABUL, Afghanistan — All U.S. and coalition troops have left Bagram Airfield, once the largest base in Afghanistan and the hub of American air operations throughout the nearly two-decade conflict, a U.S. defense official confirmed Friday.

The closure of Bagram, about 25 miles north of the capital, Kabul, marks a symbolic end to America’s longest war, though some U.S. troops remain at smaller outposts.

Gen. Scott Miller, the top U.S. commander in Afghanistan, “still retains all the capabilities and authorities to protect” the remaining forces in the country, the U.S. defense official who confirmed the pullout said on condition of anonymity because they were not authorized to speak on the record.

The airfield was turned over to the Afghan security forces without fanfare.

U.S. forces left the gates of the base unguarded without telling local officials, allowing looters to ransack parts of Bagram on Friday morning, said two officials and a resident who witnessed the events.

“There was a gap, there was nothing to secure the airport,” Darwaish Raufi, governor of the district around the base, said Friday.

The base is now under control of security forces, said Abdul Rauf Uruzgani, provincial police chief of Parwan.

The U.S. military said planning for the transfer of the base spanned several weeks and included senior leaders in the Afghan government and leadership of the military unit that will be taking over the base.

“All handovers of Resolute Support bases and facilities, to include Bagram Airfield, have been closely coordinated,” Col. Sonny Leggett, spokesman for U.S. Forces–Afghanistan, said in a statement.

“The coordination for a smooth transition of control of the base was part of our goal for a safe and orderly withdrawal, while leaving the Afghan security forces in the best possible position as we depart,” he said.

The Afghan military will now be charged with defending Bagram against the Taliban.

A unit of 700 former Afghan army soldiers, recently recruited from all over the country, will be sent to Bagram on Saturday or Sunday to secure the base, said Lt. Col. Atiqullah Tarin, a recruiter for the Afghan military. The recruiting began a month ago, officials told Stars and Stripes in June.

A spokesman for the Afghan National Security Forces confirmed Bagram had been handed over to them in a statement on Twitter.

“ANDSF will protect (the) base and use it to combat terrorism,” Fawad Aman, deputy spokesman for the Defense Ministry, said.

The handover comes less than three months after the final drawdown of international forces began. Buy Photo
A pair of 10th Mountain Division soldiers patrol through a recently cleared out hangar on Bagram Airfield in Afghanistan, in December 2001. The U.S. has fully withdrawn from the airfield, once the largest American base in the country, a U.S. defense official confirmed Friday. (Stars and Stripes)

“It really does represent the true completion of the U.S. military experience of the last 20 years in the country,” said Jason Campbell, a policy researcher at Rand Corp., who visited Bagram several times throughout his career.

The exact number of remaining U.S. troops in Afghanistan remains unclear. The Pentagon last month stopped releasing details of the withdrawal after saying half of roughly 3,000 troops and U.S. equipment had been pulled out or destroyed.

About 650 American service members are expected to stay to protect the U.S. Embassy in Kabul and potentially the city’s airport, The Associated Press and Reuters recently reported, citing unnamed American officials.

The Taliban in a statement Friday welcomed the withdrawal of U.S. and coalition troops from Bagram, calling it a “positive step.”

The U.S. established a presence at Bagram shortly after invading Afghanistan in October 2001 to hunt down al-Qaida leader Osama bin Laden, the mastermind behind the 9/11 attacks, and oust the ruling Taliban who harbored the terrorist group.

It wasn’t the first time the U.S. had been there.

The airport at Bagram was built in the 1950s, and President Dwight Eisenhower was an early passenger, landing there at the start of an official visit to Afghanistan in 1959. In the 1970s, the airport was maintained by the Afghan air force with some support from the U.S. But by the end of the decade, the Soviets invaded the country and took control.

The Soviets used Bagram as a hub for their operations throughout the Soviet-Afghan war, which spanned from 1979 to 1989, similar to how the U.S would use the base in future years.

When the U.S. eventually arrived in late 2001, the 6,000-acre base was in ruins after several years of being contested by Taliban and Northern Alliance resistance fighters.

But it took only a few years for a few tents nestled among old Soviet tanks and dilapidated buildings to become a sprawling little America, and eventually the Defense Department’s “busiest single-runway airfield.”

The growth was helped by a $68 million runway completed by the U.S. in 2006. It was 2,000 feet longer than the previous runway and able to support all U.S. aircraft.

Bagram would go on to welcome three sitting U.S. presidents — Joe Biden also visited as vice president. Scores of other politicians and celebrities and tens of thousands of troops also arrived over the years. 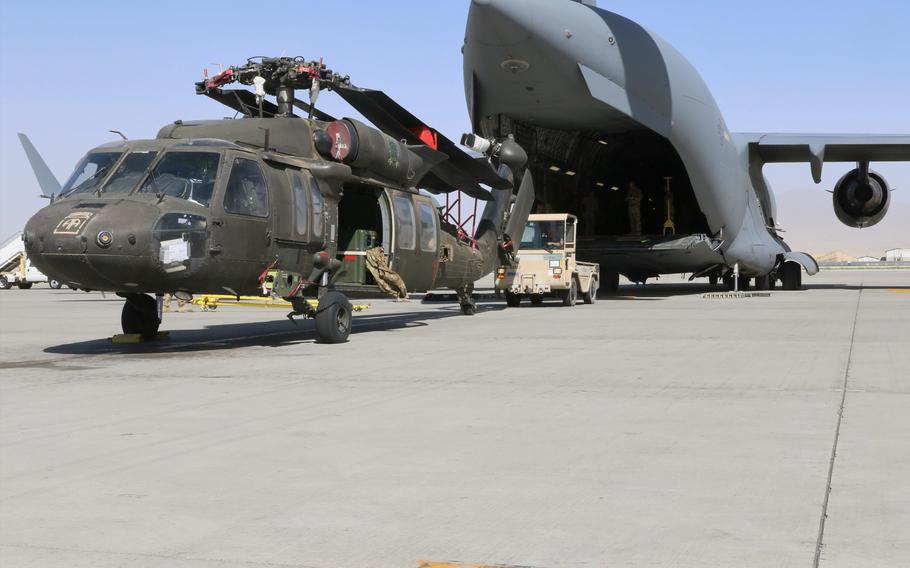 Aerial porters work with maintainers to load a UH-60L Black Hawk helicopter into a C-17 Globemaster III at Bagram Airfield, Afghanistan, as the U.S. military draws down forces and equipment in the country, June 16, 2021. (Corey Vandive/U.S. Army)

The amenities of a base that functioned like a fortress city included American fast-food restaurants, salsa classes and soccer leagues. It was a stark contrast to the conditions that troops deployed to other parts of the country endured.

“The disparity was pretty pronounced,” Campbell said of life on Bagram compared to life at an outpost in a high-intensity area. “On a base like Bagram, you can get awfully close to war without feeling like you’re in it.”

That’s not to say the situation at Bagram was always calm. For years, rocket attacks were a regular occurrence, although rarely deadly. Militants also attacked the security gates and security patrols by coalition troops outside the base. In one instance, an Afghan contractor blew himself up and killed four Americans on base.

But serious attacks were relatively few and far between. Nevertheless, there was a strong desire for many on base, whether they were deployed there or just passing through, to get off it, said Jason Dempsey, an adjunct senior fellow at the Washington D.C.-based Center for a New American Security.

“Ninety percent of what happens at Bagram is waiting,” Dempsey, a former infantry officer who deployed twice to Afghanistan, including from 2012 to 2013, wrote in his notes at the time, which he shared with Stars and Stripes.

Dempsey went on to describe parts of Bagram looking “as if 10,000 refugees collapsed in the dark at the end of a long march and in daylight, built shacks where they fell.”

“Bagram … doesn’t get written about,” he said. “But it is our war; unwieldy and ad hoc.”

The base was also critical for U.S. operations that aimed to thwart Taliban offensives to overthrow the government in Kabul, and prevent terrorist groups from using Afghanistan to attack the U.S. and its allies.

At the start of 2015, when NATO shifted its combat mission to one focused on training and advising Afghans, the U.S. continued a separate counterterrorism mission that targeted groups like al-Qaida, whose fighters remain in the country 20 years into the mission aimed at eradicating the groups.

The U.S. is reportedly interested in opening another base in a country near Afghanistan that would help it combat future terrorist threats.

After Biden announced in April that he would pull all U.S. troops out by September, some lawmakers questioned whether it was wise to abandon Bagram, which Rep. Michael Waltz, R-Fla., a former Green Beret, described as “the definition of key terrain.”

Michael O’Hanlon, a senior fellow at the Brookings Institution policy group, who visited Bagram about a dozen times, said a more prudent approach would have been to hold on to the base and keep a few thousand troops in the country long enough to give an Afghan-led peace process a chance.

“It’s a shame to lose it,” he said. “It was an impressive, largely defensible and important staging base for so many things, including intelligence operations as well as other tools of counterterrorism.

“Without it, we will have a very hard time helping the Afghan government stay in power,” he said.