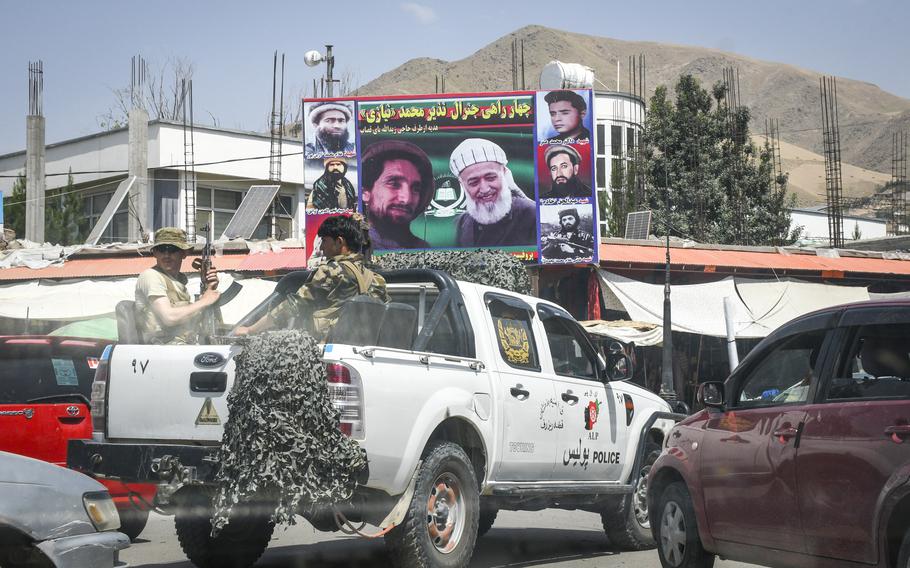 Buy Photo
Afghan local police pass by depictions of noted anti-Taliban leaders Ahmad Shah Massoud and Burhanuddin Rabbani, July 15, 2019, as they drive through the streets of Faizabad, the provincial capital of remote Badakhshan province. The province, once a stronghold against the Taliban, fell to the militant group, Afghan officials said Aug. 11, 2021. (J.P. Lawrence/Stars and Stripes)

KABUL, Afghanistan — Taliban routs of provincial capitals in northern Afghanistan, some of which were once among the strongest opponents of the militant group’s rule, have U.S. officials and experts increasingly worried about the Kabul government’s hold on power.

Observers say that although the capture of each small city isn’t broadly significant on its own, the quick succession of victories creates opportunities for the militants.

“The more minor population centers the Taliban take, the more that drives the government out of entire areas of the country, entire provinces in many places,” said Andrew Watkins, a senior Afghanistan analyst at International Crisis Group. “And that frees the Taliban up to mass even more of their fighters against the largest population centers.”

On Tuesday, they seized Faizabad in Badakhshan province overnight, local officials said. It was the seventh capital in the north and ninth overall to fall in less than a week.

Faizabad, home to about 30,000 people, is dwarfed by nearby Kunduz, the only major population center the Taliban have taken. But the capture of smaller capitals stretches the Afghan army and lowers morale, analysts say.

The victories also bring the insurgents to the doorsteps of larger cities and their ultimate prize: Kabul. On Tuesday, The Washington Post reported that according to a U.S. intelligence assessment and unnamed U.S. officials, the capital could fall to the Taliban within 30-90 days.

A previous assessment predicted that it would take the Taliban between six and 12 months to overrun the city. 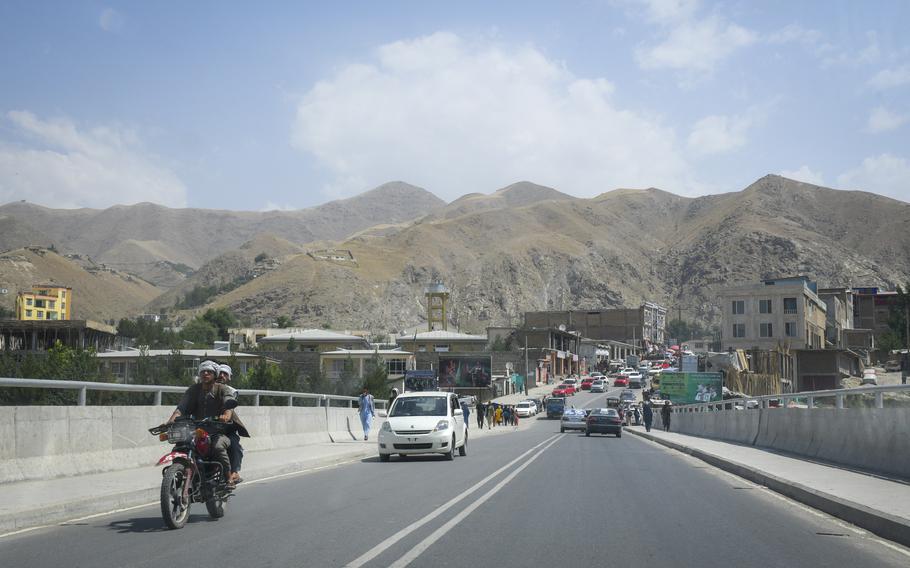 Buy Photo
Residents drive across a newly constructed bridge July 15, 2019, along one of the main roads of Faizabad, the provincial capital of remote Badakhshan province. The city was once a stronghold against the Taliban but has fallen to the militant group, officials said Aug. 11, 2021. (J.P. Lawrence/Stars and Stripes) Buy Photo
A swollen river roars through a mountain valley in remote Badakhshan province July 14, 2019. The provincial capital of Faizabad, once a stronghold against the Taliban, fell to the militant group, local officials said Aug. 11, 2021. (J.P. Lawrence/Stars and Stripes) Buy Photo
An Afghan police checkpoint near the neck of a narrow and winding valley overlooks a paved road to Faizabad, the provincial capital of remote Badakhshan province on July 14, 2019. Faizabad was once a stronghold against the Taliban but has fallen to the militant group, local leaders said Aug. 11, 2021. (J.P. Lawrence/Stars and Stripes) 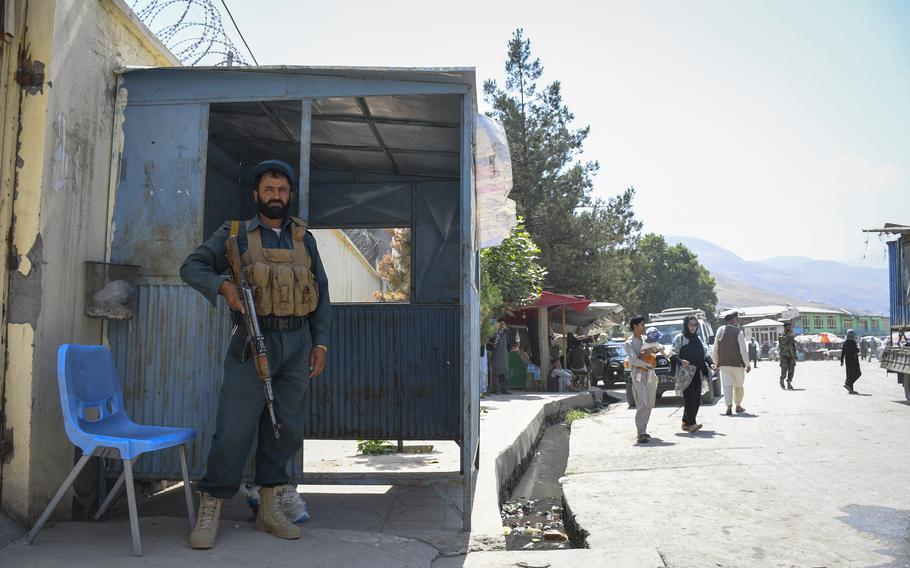 Buy Photo
An Afghan policeman guards the entrance of a government building in Faizabad, the provincial capital of remote Badakhshan province, on July 15, 2019. The city was once a stronghold against the Taliban but has fallen to the militant group, local leaders said Aug. 11, 2021. (J.P. Lawrence/Stars and Stripes)

The Taliban’s rapid sweep through the north has taken many by surprise, especially since the group’s heartland is in the south. It was the former Northern Alliance, a loose group of allies once based in Badakhshan, that teamed up with the U.S. during its 2001 invasion to topple the Taliban.

The unexpected onslaught is forcing the government to prioritize between trying to retake territory in the north and preventing other lands from falling elsewhere, said Adam N. Weinstein, a research fellow at the Washington, D.C.-based Quincy Institute for Responsible Statecraft.

“That’s very divisive because no one wants to see their regions sacrificed,” Weinstein said.

However, military officials acknowledge that sacrifices are inevitable because Afghan forces are too strained to control the whole country.

Last month, Gen. Mark Milley, chairman of the Joint Chiefs of Staff, said that Afghan government forces were changing their strategy to consolidate around cities.

The fall of nine provincial capitals in less than a week suggests that the shift may have been made too late. Nevertheless, Weinstein said it was the right move.

Zaranj, in western Nimruz province, was the first provincial capital to fall on Friday, followed by Sheberghan in northern Jawzjan province the next day. On Sunday, the Taliban overtook the capitals of Kunduz, Sar-e-Pul and Takhar provinces.

The Taliban’s success in the north continued the following day, when they captured Aibak in Samangan province.

The government has played down the news that some of the capitals have entirely fallen, saying its forces continue to fight in areas.

The Taliban’s assault on cities comes after the group seized swaths of rural territory as part of their offensive, which began in May after President Joe Biden announced that all U.S. troops would be pulled out of the country by Aug. 31.

Part of the Taliban’s aim is to trigger a mass psychological collapse in the Afghan military and in society at large, and the government must find a way of maintaining morale, Nishank Motwani, former deputy director of the Kabul-based Afghanistan Research and Evaluation Unit, said in an email.

“The Taliban’s capture of relatively less protected provinces has a disproportionate psychological impact that projects an image of the militants as an unstoppable force, and this perception of power is power itself,” Motwani said.

U.S. airstrikes against the Taliban continue as the last American troops leave the country. But the limited strikes are expected to end unless the Biden administration announces a policy change.

Despite two decades of U.S. assistance and training, it’s uncertain how effective Afghan government forces will be in the weeks ahead. Their special operations units and air force give them advantages, but neither are large enough to control large areas.

Afghan security forces, despite the help they’ve received from NATO personnel, are in no position to tame the insurgency, said Michael Kugelman, deputy director of the Asia program at the Wilson Center in Washington.

“All the preparations that the Taliban has made in recent years and months have set up the insurgents perfectly well for a run on Kabul,” Kugelman said.