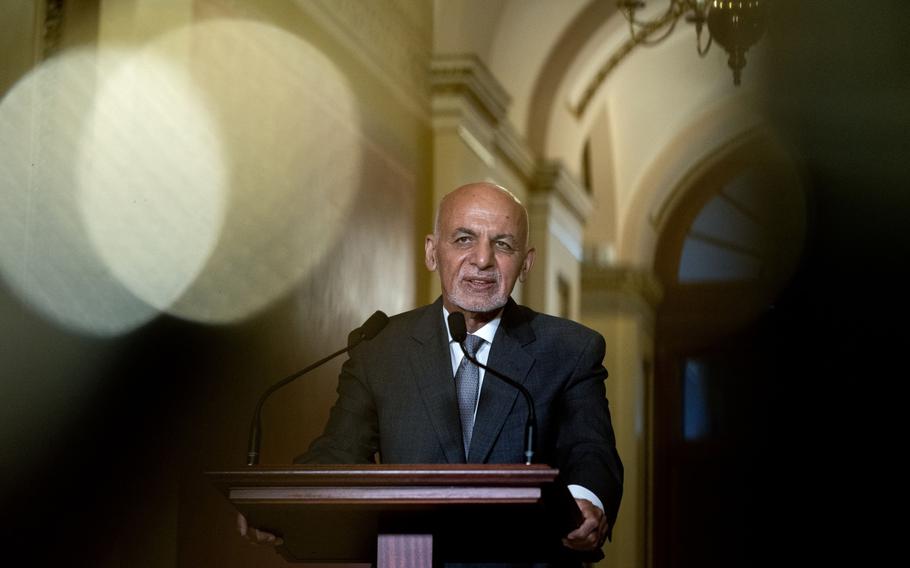 Afghan President Ashraf Ghani views peace talks with the Taliban as dead and is looking to both arm civilians and cooperate with warlords to prevent the militant group from overrunning his administration in Kabul.

Since the weekend the Taliban has captured the capitals of five northern provinces and one in the west, where they met little resistance from the Afghan army. The U.S. military, which has withdrawn most of its troops ahead of an Aug. 31 deadline to exit the country after 20 years of war, said Sunday it conducted airstrikes in an effort to protect its allies.

Describing the mood in the presidential palace as worse than ever, people with knowledge of the situation said Ghani is feeling increasingly isolated as the U.S. leaves the country and the Taliban gain diplomatic support from key countries such as Pakistan, Russia and China. His only way out, they said, is to rally Afghan groups opposing the Taliban to band together in an imminent civil war — similar to the situation in the 1990s.

While the government remains open to talks, the Taliban are backing away from negotiations, presidential spokesman Mohammad Amiri said on Monday. Ghani decided to “mobilize and arm” local people to fight against the Taliban after a meeting with top warlords and political leaders earlier in the day, he added.

“Unfortunately, the Taliban don’t believe in the peace talks,” Amiri said in a text message. “They are trying to grab power by force and such acts are not acceptable to the people and government of Afghanistan.”

The last round of peace talks between the Taliban and the Afghan government took place in Doha, Qatar, on July 17, after which both sides agreed to continue talking. But no meetings have followed, and Ghani told his cabinet on July 31 the Taliban “have no will for peace nor for building” the country. “We want peace, but they want our surrender,” he said.

The speed at which Afghan forces are losing control over some parts of the country has generated criticism of the Biden administration from Moscow to Beijing for a hasty withdrawal that risks destabilizing the region. The two-decade war killed more than 2,400 U.S. service members and cost taxpayers about $1 trillion.

In addition to territorial gains, the Taliban have made diplomatic advances that go beyond what the group achieved before the U.S. invasion in 2001 following the Sept. 11 terrorist attacks. Chinese Foreign Minister Wang Yi hosted a Taliban delegation last month, urging the group to build a suitable political system in Afghanistan while fighting Uyghur separatists. Russian Foreign Minister Sergei Lavrov also called them “reasonable people.”

While the Taliban have said the want peace talks with Ghani’s government, on the ground the group is taking an assertive tone and leaving a path of destruction reminiscent of the brutality it deployed before the war. On Friday, it claimed responsibility for killing the government’s top media official while promising to avenge the U.S. airstrikes with “full strength.”

“The Taliban won’t surrender and will storm cities including Kabul to battle and overthrow the government if the talks eventually fail,” Zabihullah Mujahed, a spokesman for the group, said in an interview. “God willing, we’re expecting there should be a political settlement before the war turns any deadlier,” he added, blaming Ghani for “prolonging the war.”

It’s not immediately clear how long the Afghan National Defense and Security Forces will have the backing of American airpower after the final ground troops leave. John Kirby, a Pentagon spokesman, said Monday the U.S. would continue to support Afghan forces through the end of the month before shifting to “financial and logistical maintenance support from outside the country.”

“This is their country,” Kirby said at a briefing in Washington. “These are their military forces. These are their provincial capitals, their people to defend. It’s really going to come down to the leadership that they’re willing to exude here at this particular moment.”

Fierce battles are raging for control of other cities from Lashkar Gah and Kandahar in the south to Herat in the west. Local warlords and civilians have joined Afghan troops in several places.

“After August 31, I fear the war could carry on as intensely or even more than it has the past three months,” said Andrew Watkins, a senior analyst with International Crisis Group. Kabul “may come under attacks of different kinds; this could be a continuation of targeted killings, a return to more spectacular complex attacks or bombings, or even military maneuvers on the capital’s outskirts.”

There are also questions about Ghani’s ability to unite the fractured elements of Afghanistan’s political class opposed to the Taliban.

“President Ghani is not leading a unified Kabul, and if he is not leading a unified Kabul and he’s not showing the capacity to unify it, then, naturally, his own position as the Taliban advances will not get strengthened,” said Vivek Katju, former Indian ambassador to Afghanistan. “What I see is that there’s an attempt at established political leaders trying to come together and to form a kind of common front. But how successful would it be?”

In Kandahar, the group tortured and killed a famous local comedian, Nazar Mohammad, late last month for allegedly defaming the militants in his shows. There have been reports the Taliban are asking for the names of women and girls to be married off to their fighters as they move through the country, forbidding women from leaving their homes and closing schools for girls.

The group also killed and skinned the bodies of two brothers in Shakar Dara, just 20 miles outside Kabul, for refusing to shut down a literacy training center for women, according to their sister, who asked not to be named for fear of retribution. Her father found the bodies in a neighboring district the next day with the help of local residents. The surviving members of her family have now fled to the relative safety of the capital.

“It’s a throwback to the time when the former Russia-backed government fell to the Taliban insurgents,” Afghan army veteran and independent defense analyst Atiqullah Amarkhel said in a phone interview from Kabul. “The war this time will be deadlier and more destructive.”