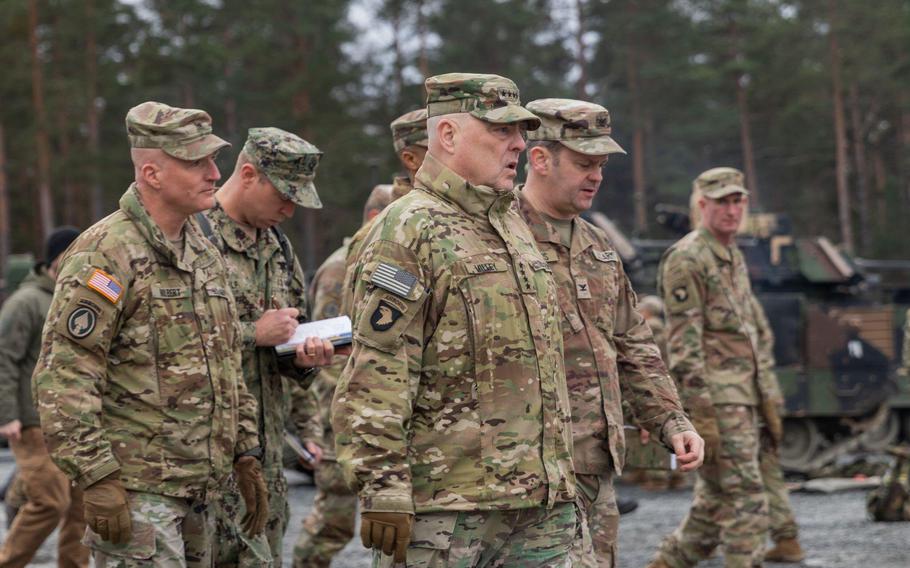 Gen. Mark Milley, chairman of the Joints Chiefs of Staff, center, walks with leaders responsible for training Ukrainian soldiers at the U.S. Army base in Grafenwoehr, Germany, on Monday, Jan. 16, 2023. Milley met with the Ukrainians and observed training during his visit. (Jordan Sivayavirojna/U.S. Army)

GRAFENWOEHR, Germany — The U.S. military’s top officer arrived at the Army’s largest training area in Europe on Monday to meet with Ukrainian forces, who came to Bavaria for specialized training on Bradley armored vehicles starting this week.

Gen. Mark Milley, chairman of the Joint Chiefs of Staff, was briefed on the details of the expanded initiative, which aims to train roughly 500 Ukrainian troops on a monthly basis. Milley also mingled with Ukrainian soldiers, many of whom arrived at the Army’s training range in Grafenwoehr from the front lines of the war.

“The urgency was clear,” Col. Dave Butler, Milley’s spokesman, said Monday. “These soldiers are going off to defend their country in combat.”

During his visit, Milley observed allied efforts aimed at ensuring Ukrainian troops have what they need in their battle against the Russians.

“We saw the international coordination for equipment delivery (and) the training, and we saw the assistance with planning,” Butler said.

Milley spent a bit less than two hours at “Camp Kherson” — a part of the training area named after a city in Ukraine where Ukrainian troops scored a key victory against Russia last year. More than 600 Ukrainian troops began the expanded training program at the camp just a day before Milley arrived.

Milley’s stop in Grafenwoehr was part of a swing through Europe, which includes a meeting of NATO defense chiefs in Brussels on Wednesday.

At the Army’s ranges in Germany, Ukrainian forces have begun practicing how to fire and maneuver with Bradley infantry fighting vehicles, which were recently greenlighted by the Pentagon for use by the Ukrainians.

The training grounds in Grafenwoehr include more than 100 miles of tank and secondary trails as well as dozens of artillery and mortar firing positions, and aerial gunnery and close-air-support zones.

For months, Ukrainian officials have pressed the U.S. and others for more armored capabilities. The United Kingdom, Poland and France have said recently that they will send tanks or other armored equipment to Ukraine.

The push to increase the number of Ukrainians trained by U.S. soldiers builds on what the U.S. and its allies have been doing since 2014, the year of Russia’s initial military intervention in Ukraine.

Those efforts ramped up dramatically following Russia’s full-scale invasion of Ukraine last year in February, to include about $20 billion in military assistance.

Stars and Stripes reporter John Vandiver and The Associated Press contributed to this report.