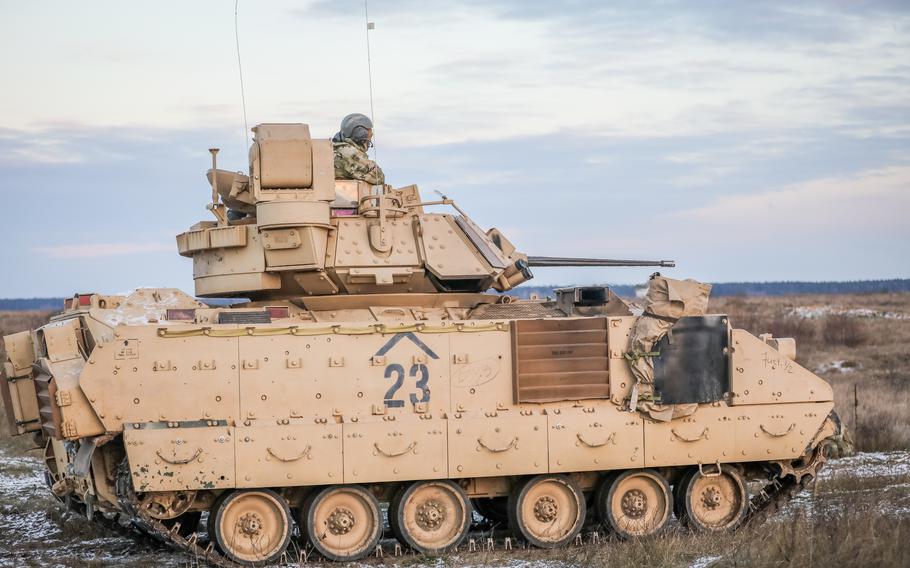 WASHINGTON — The United States will send a new round of aid to Ukraine that includes armored ground vehicles to help Ukrainian troops fight off invading Russian forces, according to the White House and Pentagon.

“It is obviously an armored capability that can transport mechanized infantry into battle in support of both offensive and defensive operations,” Ryder said, adding the Bradleys will provide “a level of firepower and armor that will bring advantages on the battlefield.”

Ryder said more details about other weapons and equipment included in the aid package will come Friday.

News reports Thursday said the new aid package is worth almost $3 billion and is first to dip into the $45 billion set aside by Congress last week for Ukraine.

Since Russia invaded Ukraine in February, the United States has given Kyiv roughly $20 billion in assistance. That has largely consisted of military equipment such as Humvees, the Patriot air defense system, drone systems, rocket launchers, millions of rounds of ammunition, tactical winter gear and electric generators.

Earlier Thursday, President Joe Biden told German Chancellor Olaf Scholz during a phone call that the U.S. will be sending Bradleys to Ukraine.

“President Biden and Chancellor Scholz expressed their common determination to continue to provide the necessary financial, humanitarian, military and diplomatic support to Ukraine for as long as needed,” the White House said in a statement. “To this end, the United States intends to supply Ukraine with Bradley Infantry Fighting Vehicles, and Germany intends to provide Ukraine with Marder Infantry Fighting Vehicles. Both countries plan to train Ukrainian forces on the respective systems.”

Ryder said the new aid package will include training Ukrainian troops how to operate and maintain the Bradleys. Biden had told reporters Wednesday that he was considering sending Bradleys to Ukraine.

Named after World War II Army Gen. Omar Bradley, the vehicle has several variants including the M2, M3 and one called the M6 Linebacker, which is an air defense variant. It wasn’t immediately clear Thursday which version or versions Ukraine is getting.

Scholz pledged during his call with Biden that Germany will also send one of its Patriot missile batteries to Ukraine. The U.S. said last month that it was sending one but noted it would take weeks or months to train Ukrainian troops on how to use it.

The new aid package was announced after Russian President Vladimir Putin said Thursday that he has ordered a 36-hour ceasefire in Ukraine this weekend as part of the Orthodox Christmas holiday. The Ukrainian government rejected the truce, saying it’s grown skeptical of Moscow’s motives. At the Pentagon, Ryder echoed those concerns.

“We’ll see,” he said. “I think that there's significant skepticism … given Russia’s long track record of propaganda, disinformation and its relentless attacks against Ukrainian cities and civilians. If Russia was truly interested in ceasing the violence and the bloodshed they have brought to Ukraine’s people, they would pull out of Ukraine immediately and end this war altogether right now.”