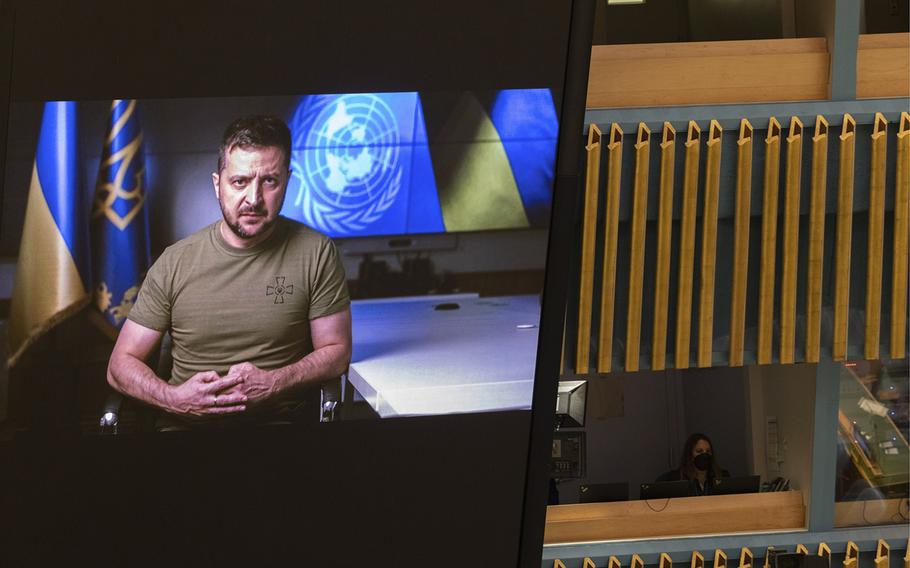 WASHINGTON — Ukrainian President Volodymyr Zelenskyy stood in an army green outfit on the House floor Wednesday as he implored congressional lawmakers not to turn their backs on the war raging in Ukraine.

He harkened back to American victories in World War II, drawing parallels between Adolf Hitler and Russian President Vladimir Putin and the Battle of the Bulge and the battle for the Ukrainian frontline city of Bakhmut. He quoted President Franklin D. Roosevelt, who led the wartime alliance that triumphed over Nazi Germany. And Zelenskyy paid tribute to America’s long road to independence in a bid to win over the hearts of lawmakers as Congress considered another aid package for Ukraine.

“Your money is not charity,” he said. “It’s an investment in global security and democracy that we handle in the most responsible way.”

Zelenskyy’s speech before a joint meeting of Congress on Wednesday capped his first visit outside Ukraine since Russia’s invasion 300 days ago and was reminiscent of another historic address more than 80 years earlier. House Speaker Nancy Pelosi, D-Calif., noted her father, a former congressman, witnessed British Prime Minister Winston Churchill address Congress in December 1941 to rally support for a fight against tyranny.

“Eighty-one years later this week, it is particularly poignant for me to be present when another heroic leader addresses the Congress in a time of war – and with democracy itself on the line,” Pelosi said in a statement.

Lawmakers, many of them clad in the blue and yellow colors of the Ukrainian flag, greeted Zelenskyy with rapturous applause and cheers. His 25-minute speech, delivered in accented English, was frequently halted by standing ovations.

Zelenskyy told Congress his country is at a critical point in the 10-month war as Russian troops dig in along a 600-mile front stretching across Ukraine’s eastern Donbas region and the south. Ukraine’s ability to wrest back the territory occupied by Russia heavily depends on continued American resources, he said.

“We have artillery, yes, thank you,” Zelenskyy said. “Is it enough? Honestly, not really.”

Ukrainian forces remain outmanned and outgunned, he said. But, as he repeatedly emphasized, they remain standing. Bakhmut, a battlefield city that Zelenskyy visited Tuesday, is “soaked in blood” and blasted by artillery fire every hour but it too is still standing, he said.

“Ukraine holds its line and will never surrender,” he said, drawing loud applause.

Zelenskyy credited much of Ukraine’s resilience to the material assistance and leadership of the U.S., which he said has played a key role in uniting Europe against Russian aggression.

“I hope my words of respect and gratitude resonate in each American heart,” he said. “Against all odds, and doom and gloom scenarios, Ukraine didn’t fall. Ukraine is alive and kicking.”

In a gesture of Ukraine’s appreciation, Zelenskyy presented a Ukrainian flag signed by soldiers fighting in Bakhmut as a gift to Congress. Vice President Kamala Harris and Pelosi held up the flag before Pelosi gifted the American flag that flew over the Capitol on Wednesday to Zelenskyy.

His address came as lawmakers considered the passage of close to $50 billion in new emergency aid to Ukraine, the largest package yet. It is included in a $1.7 trillion spending bill and would push U.S. support for the war effort to more than $100 billion this year.

It would provide $13 billion to prop up Ukraine’s economy and address energy supply shortfalls as Russia continues to bombard Ukrainian infrastructure in hopes of plunging the country into a cold and dark winter.

The assistance would also set aside $9 billion for training, equipment and supplies for the Ukrainian military and $2 billion to help refugees.

Zelenskyy last appeared before Congress in March via video and invoked Pearl Harbor as he pressed for further military assistance from the United States. His wife, Olena Zelenska, came to Capitol Hill in person in July to plead lawmakers for air defense systems as she showed them graphic images of the war’s youngest victims.

On Wednesday, the U.S. announced it would finally provide Ukraine the most advanced air-defense weapon of all: the Patriot missile battery. The system is part of $1.8 billion in new security aid that also includes guided rockets, ammunition and armored vehicles.

Congress remains united in its solidarity with Ukraine, Senate Minority Leader Mitch McConnell, R-Ky., insisted to reporters after Zelenskyy’s speech. He has played down growing discontent among some Republicans who argue aid to Ukraine is wasteful or could be better spent elsewhere.

“The most important thing going on in the world is to beat the Russians in Ukraine,” McConnell said. “Fortunately, they have a leader that everyone can look up to and admire. And it’s nice to have something here at the end of the year that we all actually agree on.”

Zelenskyy appeared to acknowledge the political divisions in the U.S. on Wednesday, calling on the Senate and the House to remain bipartisan in their decisions. Republicans are set to take control of the House in January.

“The world is too interconnected and too interdependent to allow someone to stay aside,” Zelenskyy said. “Our two nations are allies in this battle and next year will be a turning point, I know it — the point where Ukrainian courage and American resolve must guarantee the future of our common freedom, the freedom of people who stand for their values.”