Terrifying images of the aftermath of the strike on Dnipro, Ukraine Rescuers work to free victims from the rubble of a residential apartment complex that was hit by Russian forces in Dnipro, Ukraine, on Saturday, Jan. 14, 2023. Several people were killed and more than 25 were injured, including children. The attack marked the most significant strike on the central Ukrainian city since the war began. Dnipro had until now served as a safe haven for thousands of displaced people from other regions. (Wojciech Grzedzinski/for The Washington Post)

DNIPRO, Ukraine — Dozens of people were killed Saturday and dozens of others wounded when a Russian missile struck a nine-floor apartment complex in central Ukraine. The timing, on a weekend afternoon, meant many people were at home at the time of the strike. Their apartments collapsed into a heap of rubble, burying many of them underneath.

The strike was especially shocking because Dnipro has been a relative safe haven for Ukrainians fleeing front-line towns elsewhere. 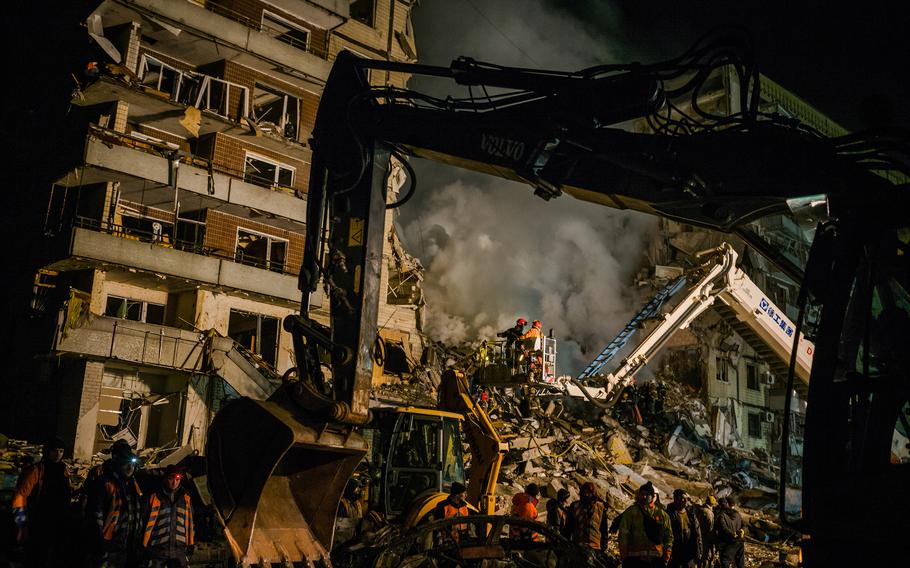 In the hours after the attack, hundreds of people gathered at the scene — some to watch from afar and others to help dig people and pets out. Civilians turned up with hot food and drinks for the rescue teams, who were working in freezing temperatures under falling snow. 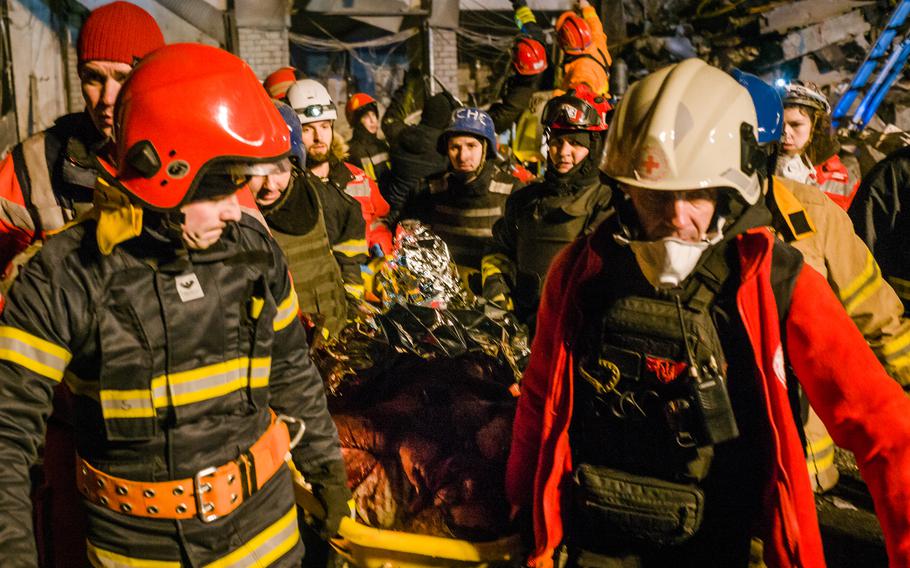 Rescue workers transport a victim from the rubble. (Wojciech Grzedzinski/for The Washington Post)

One elderly woman, who told rescuers her name was Lyuba, was freed from the eighth floor of one part of the building after rescuers saw her waving a piece of red fabric from where she was trapped under debris. After being lowered down with construction equipment, she was placed on a stretcher and transported to an ambulance — her legs crushed and her face covered in blood.

The bodies of those who did not survive were placed in white plastic bags and set to the side. 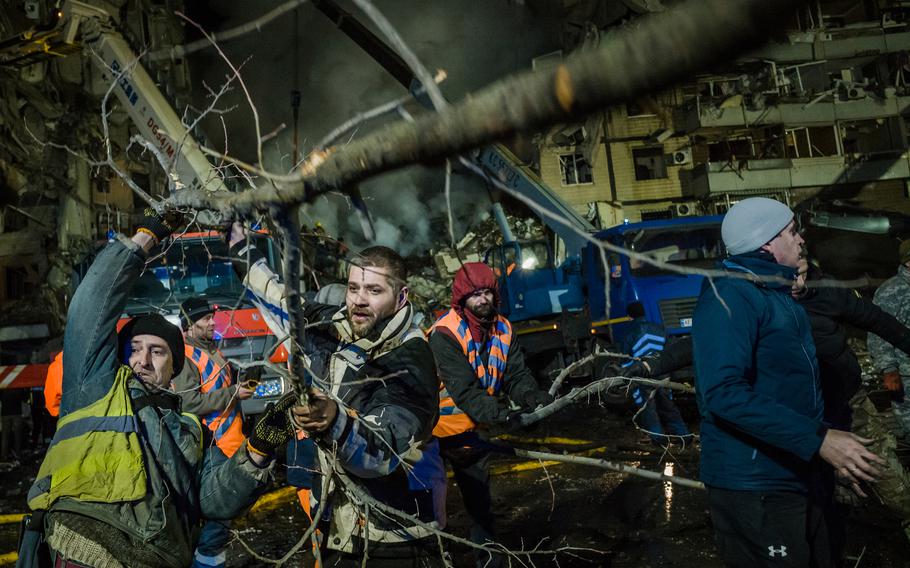 Rescuers and civilians work to free victims from the rubble of a residential apartment complex that was hit by Russian forces in Dnipro, Ukraine, on Jan. 14, 2023. (Wojciech Grzedzinski/for The Washington Post)

The work continued through the night, with floodlights shining on the scene and many workers using headlamps or cellphone lights to search for signs of survivors.

On Sunday morning, a rescuer used his hands to dig away at the debris, eventually creating a small hole. He took off his helmet to fit his head through — in an apparent effort to communicate with a young woman trapped on the other side.

Soon after, the woman was lifted out of the wreckage, wincing in pain as the workers passed her between them. Watching from the street, a woman in a red hat clasped her hands over her mouth as she watched the scene. She said she believed the rescued woman was her neighbor. 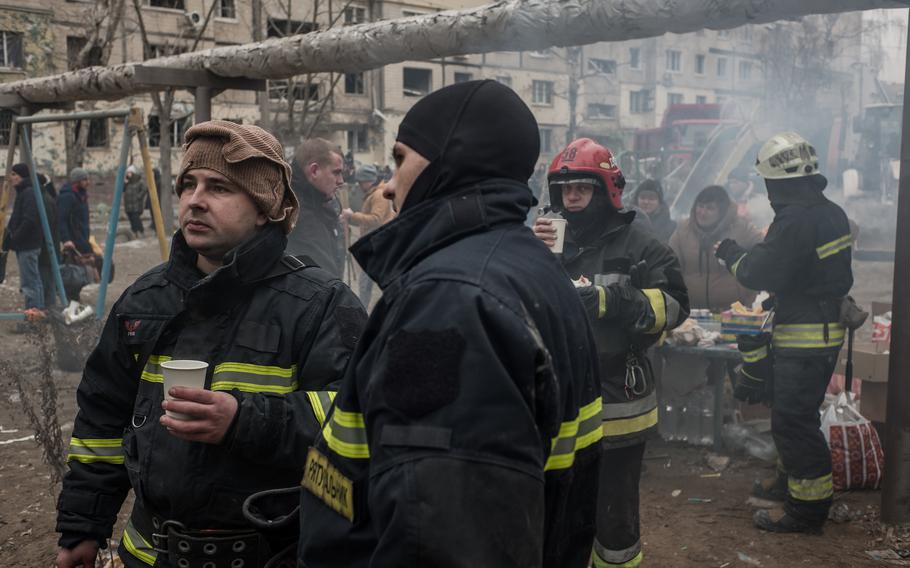 Rescuers rest as their colleagues continue the search. (Wojciech Grzedzinski/for The Washington Post)

Over the course of the day, several more bodies were removed from the rubble, the death toll steadily rising.

As dusk set on the ruins of the building once again, firefighters and other responders kept digging — holding out hope some survivors might remain. 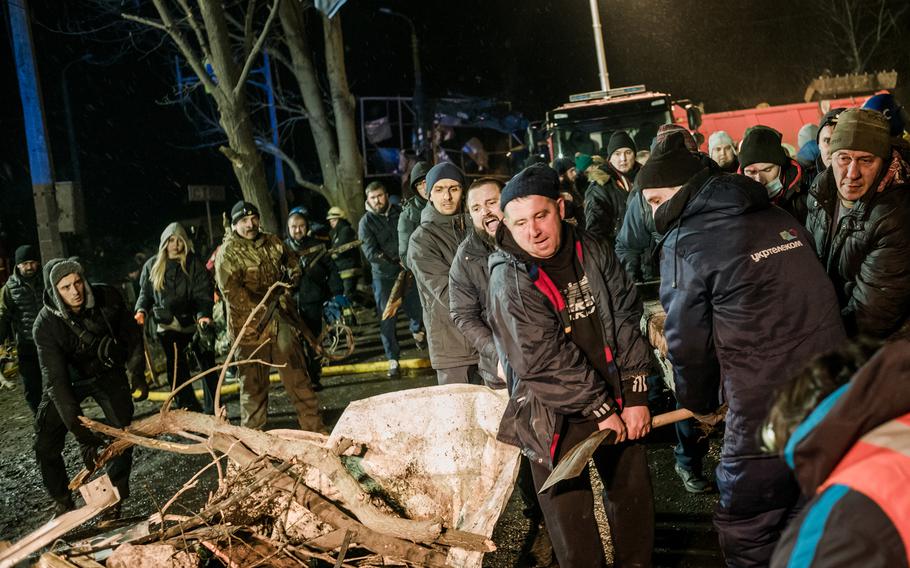 People on the scene of the strike helped search for victims. (Wojciech Grzedzinski/for The Washington Post) 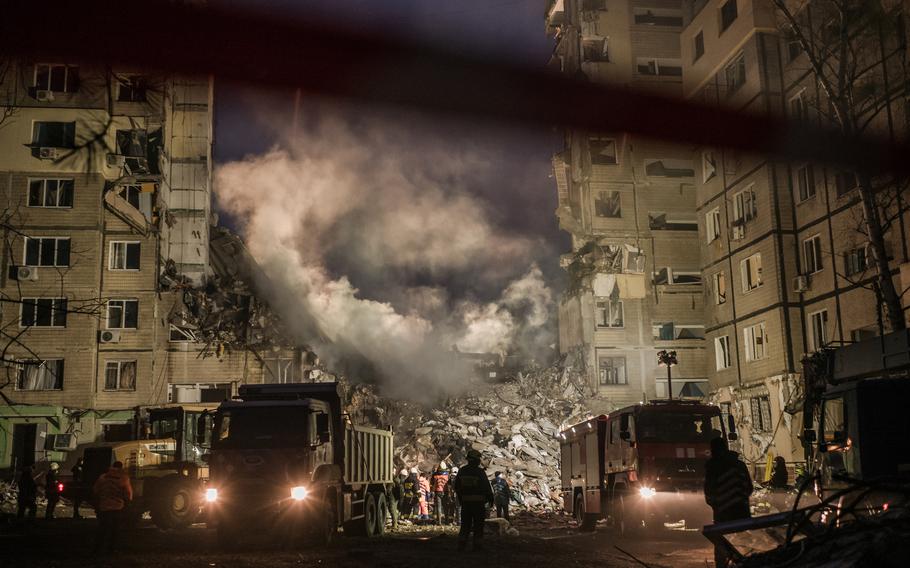 Rescuers continue to search for survivors in the ruins of a residential apartment complex that was hit by a Russian strike. (Wojciech Grzedzinski/for The Washington Post) 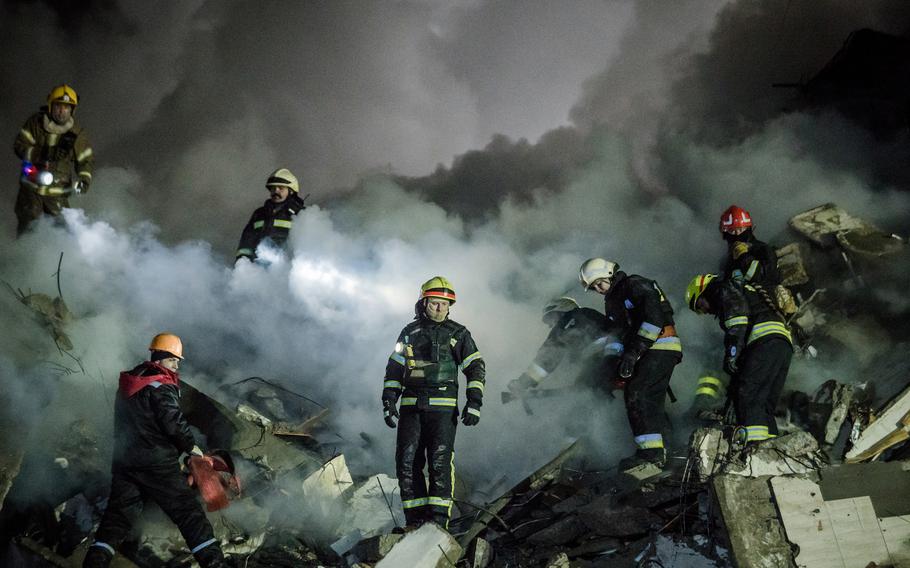 Rescuers sift through the debris. (Wojciech Grzedzinski/for The Washington Post)