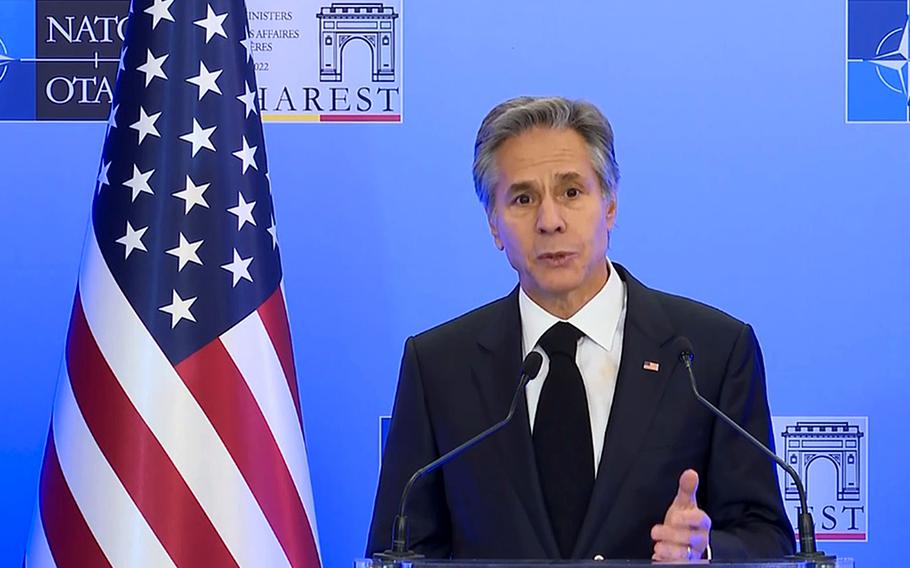 Civilian infrastructure has become the Russian military’s primary target in Ukraine and steps must be taken to protect it, U.S. Secretary of State Antony Blinken said Wednesday, a day after allies agreed to help fund repairs to Ukraine’s energy grid.

Russian President Vladimir Putin “has focused his ire and his fire on Ukraine’s civilian population,” Blinken said at the end of a two-day NATO ministerial meeting in Bucharest.

Blinken announced during the trip that the U.S. will commit more than $53 million to help stabilize Ukraine’s energy grid, a move aimed at keeping the lights and heat on as the population copes with the impending winter.

The White House also submitted a request to Congress for $1.1 billion to provide further support to Ukraine’s energy sector, which is linked to that of neighboring Moldova.

In recent weeks, Russia has destroyed more than a third of Ukraine’s energy system, plunging millions into the cold and darkness, Blinken said.

“These are President Putin’s new targets. He’s hitting them hard. This brutalization of Ukraine’s people is barbaric,” Blinken said. “We are clear-eyed about the difficult winter that lies ahead.”

A challenge for the U.S. and other allies is finding ways to help Ukraine protect the equipment ⁠— including generators, transformers and related gear ⁠— needed to secure the energy grid.

Whatever allies send in may be blown up by Russian missile strikes upon arrival. It will be up to military strategists to figure out how to avoid an endless cycle of replacing what’s been destroyed, Blinken said.

As the war in Ukraine enters its 10th month, Blinken said allied commitment to Ukraine remains “ironclad” even as Putin aims to splinter a U.S.-led coalition in Europe that is grappling with the ripple effect of the war in the form of high energy prices at home.

“The cost of inaction would be far higher,” he said.

Blinken said caving to Russia’s aggression and “accepting his brazen attempts to redraw borders by force” in Ukraine would have security implications in Europe and beyond.