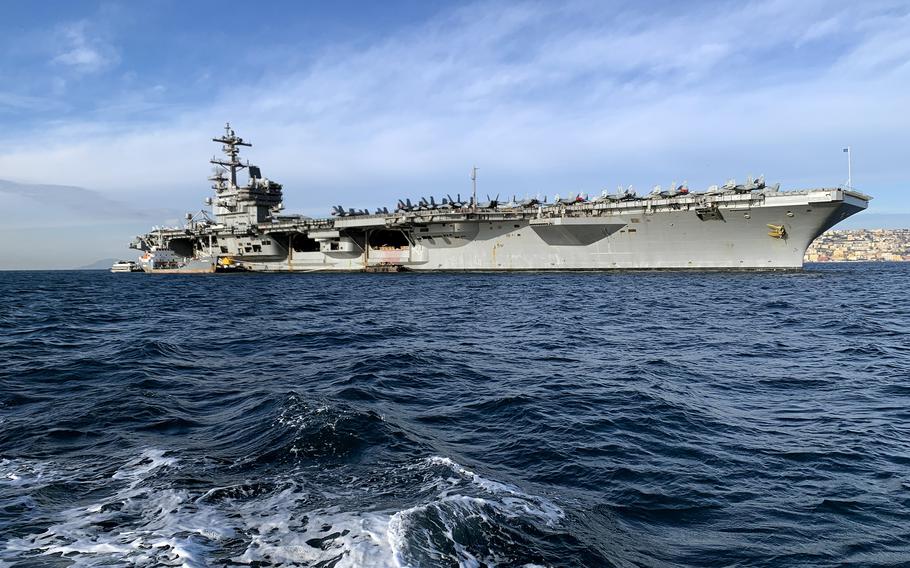 The USS George H.W. Bush in the Bay of Naples on Tuesday, Nov. 29, 2022. The aircraft carrier, on deployment to the Mediterranean Sea since August, was in Naples for a port call. (Alison Bath/Stars and Stripes)

Officers aboard the USS George H.W. Bush on Tuesday wouldn’t say exactly what happened or identify the Russian force involved in the encounter.

But on Wednesday, U.S. 6th Fleet said the mid-November interaction involved Russian naval units while the Bush carrier strike group was operating in international waters and airspace in the Adriatic Sea. The strike group was on a deterrence and defense mission for NATO, said Cmdr. Richlyn Ivey, a spokeswoman for U.S. 6th Fleet.

Ivey added in a statement that the Navy would continue to operate safely and professionally, and within international law, expecting “other nations to do the same.” 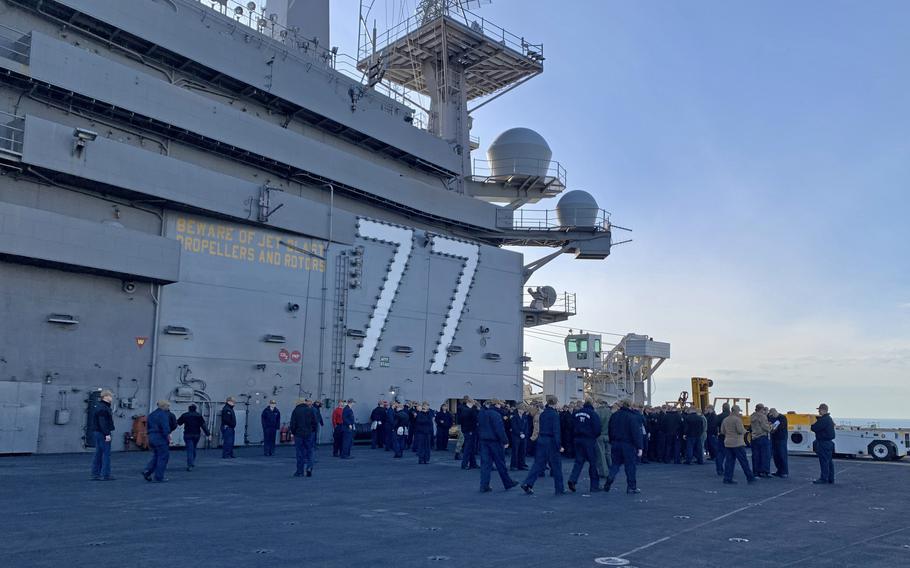 Sailors gather on the flight deck of the USS George H.W. Bush on Nov. 29, 2022. The aircraft carrier, on duty in the Mediterranean Sea since August, recently sailed with carrier strike groups from France and Italy in the Ionian Sea in a show of NATO solidarity and strength. (Alison Bath/Stars and Stripes)

“We’ve had multiple (sea encounters); one of them was not what I would consider a professional encounter at sea,” Velez told Stars and Stripes aboard the USS George H.W. Bush on Tuesday. The aircraft carrier was moored in the Bay of Naples for a port call.

Velez and Capt. David-Tavis Pollard, commanding officer of the Bush, added that most Russian encounters had been safe and professional.

The Bush strike group’s encounters follow a report of unsafe and unprofessional behavior by two Russian fighter jets in the Baltic Sea on Nov. 17.

Those jets approached NATO ships at an altitude of about 300 feet and 80 yards distance, ignoring query communications, NATO said in a statement the next day.

The interaction increased the risk of a miscalculation or mistake, NATO said. Rear Adm. Dennis Velez, commander of Carrier Strike Group 10, speaks to reporters aboard USS George H.W. Bush. The aircraft carrier was moored in the Bay of Naples for a port call on Nov. 29, 2022. (Alison Bath/Stars and Stripes)

In February, officials aboard the USS Harry S. Truman acknowledged that the Russians were watching the aircraft carrier while it operated in the Mediterranean as tensions grew in Eastern Europe.

That behavior isn’t uncommon. Russian submarines, ships and aircraft often watch U.S. and NATO ships, especially when they are conducting an exercise.

A couple of weeks later, Moscow launched a full-scale invasion into Ukraine and the Truman subsequently was ordered to remain in the Mediterranean. In August, the Bush carrier group relieved Truman and its group.

Encounters with Russian aircraft and ships also are not unusual, and officials generally characterize them as safe and professional.

However, in June 2021 the Russian military claimed to have fired warning shots and dropped bombs in the path of a British destroyer traveling in international waters in the Black Sea near Crimea, ahead of the annual Sea Breeze multinational exercise. London disputed the claim.

Earlier that year, a Russian jet conducted a low pass over the destroyer USS Donald Cook in the Black Sea, the Navy said at the time. 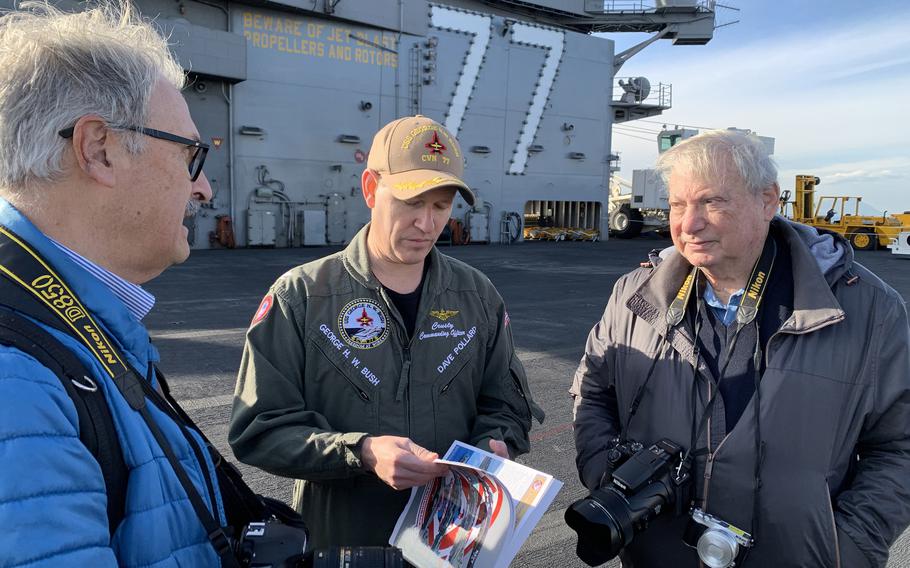 Velez and Pollard characterized flight operations aboard the Bush as standard for a deployment at about 10 to 12 hours a day, six days a week. Navy pilots also are flying over some European countries, Velez said.

“We are indeed flying some of those missions that the alliance is calling us to fly, some of those … patrols over the skies of Europe and certainly some of our allies,” said Velez, who added that the flights were not over Ukraine.

Additionally, the Bush group sailed with carrier strike groups from France and Italy in the Ionian Sea on Nov. 23 in a show of commitment to security in the Euro-Atlantic area, U.S. 6th Fleet said in a statement the same day.

“Displaying the awesome power and lethality the alliance brings to the fight is one of the surest ways to deter aggression,” Velez said in a statement.