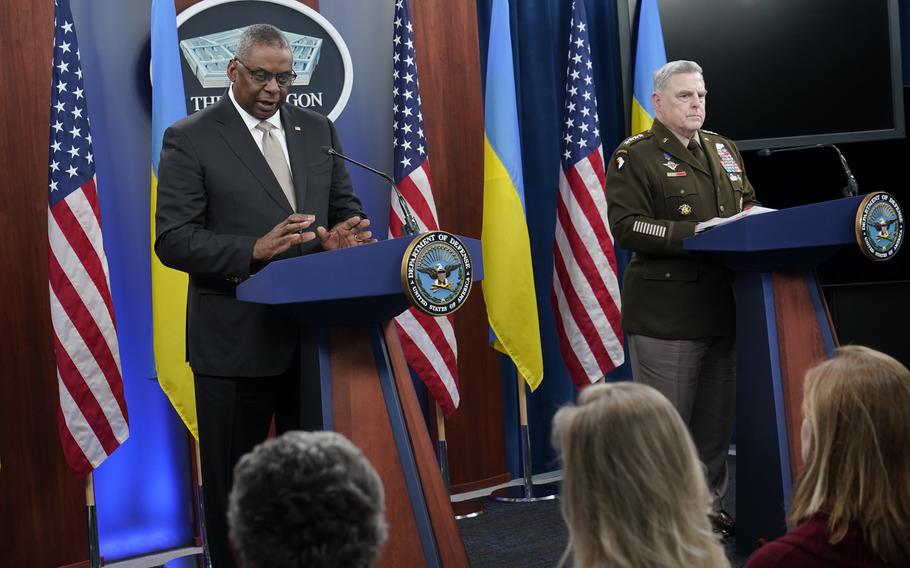 Russia’s barrage of dozens of missiles into Ukrainian territory Tuesday marked its largest air assault on Ukraine since launching its unprovoked invasion of the country in February, the top U.S. general said Wednesday.

Army Gen. Mark Milley, the chairman of the Joint Chiefs of Staff, said Russia’s bombardment of civilian targets across Ukraine, including strikes on dozens of critical power infrastructure facilities, was illegal and unnecessary. He estimated 60 to 100 Russian missiles — mostly air- and sea-launched cruise missiles — were fired during the assault, which U.S. and NATO officials have blamed for leading to a deadly blast in Polish territory that killed two civilians.

“They [the Russians] are striking the Ukrainian civilian infrastructure, and it has little or no military purpose,” Milley told reporters at the Pentagon. “The deliberate targeting of the civilian power grid, causing excessive collateral damage and unnecessary suffering on the civilian population is a war crime.”

Milley estimated more than 25% of Ukraine’s civilian population was without power after Russia’s latest attacks. He said the assault was especially cruel as temperatures drop in Ukraine with winter's approach.

That need grew starker Tuesday when an explosion in Poland near its border with Ukraine killed two civilians. Top Polish and NATO officials said Wednesday that a preliminary probe of the incident showed the errant missiles were likely a Russian-made S-300 air defense round fired by Ukraine during the Russian assault.

Echoing a statement from the White House’s National Security Council issued earlier Wednesday, Austin said the Pentagon had no information to contradict the initial Polish findings. He said he was confident in the Poles’ ongoing probe, which included the help of U.S. officials on the ground at the blast site.

“Whatever the final conclusions may be, the world knows that Russia bears ultimate responsibility for this incident,” Austin warned. “This tragic and troubling incident is yet another reminder of the recklessness of Russia's war of choice. And Ukraine has a bedrock right to defend itself.”

Ukrainian President Volodymyr Zelenskyy, meanwhile, denied Wednesday that his country’s air defense weapons were responsible for the incident. He asked for evidence to support Poland’s initial findings and demanded his officials be involved in the investigation. Austin appeared to welcome Ukrainian assistance in the probe.

Milley also said his staff made unsuccessful attempts Tuesday after the incident to reach his Russian counterpart, Gen. Valery Gerasimov, the chief of Russia’s General Staff. Milley did speak with top generals from Ukraine, Poland and other NATO nations by phone Tuesday evening, he said.

Milley and Austin pledged to continue arming Ukraine and bolstering NATO’s eastern flank for however long it is necessary. To date, the United States has increased its troops in Europe by about 20,000 and sent some $18.6 billion in weapons and supplies to Ukraine since just before the Russian invasion.

Among the key difference-makers in the fight have been the U.S.- and NATO-supplied High Mobility Artillery Rocket Systems, or HIMARS, which have allowed Ukrainian forces to strike Russian command and logistics nodes deep behind front lines. Austin said another potential game-changing weapons system had begun operating in Ukraine — U.S.-supplied short-range air defense systems known as NASAMS, or National Advanced Surface-to-Air Missile Systems.

The NASAMS, which are designed to shoot down incoming ballistic missiles, fighter jets and drones, have hit 100% of the Russian missiles at which they have been fired, Austin said, labeling their performance “very impressive.”

Milley warned the war was unlikely to end anytime soon, even as the Russians have faced one defeat after another, including the loss of key southern port-city Kherson in recent days.

The general said the winter cold could force some slowdown to tactical operations, but the Russians appeared poised to continue fighting even amid “staggering losses” of critical weapons systems — tanks, armored vehicles, helicopters and fighter jets, among them — and troops, which have left Russia’s military “really hurting bad.”

Milley last week estimated Russia and Ukraine had each suffered “well over” 100,000 combat deaths and injuries during the war.

Austin, a former four-star general, encouraged the Ukrainians to continue their advances in the south and the east even amid the impending cold, saying it would be “a mistake” to allow Russian troops to “rest, refit and rearm.”

“I don't believe they're going to make that mistake,” the defense secretary said. “And my goal is to make sure that they have the [military] means to do what's necessary to ensure that they don't hold up.”