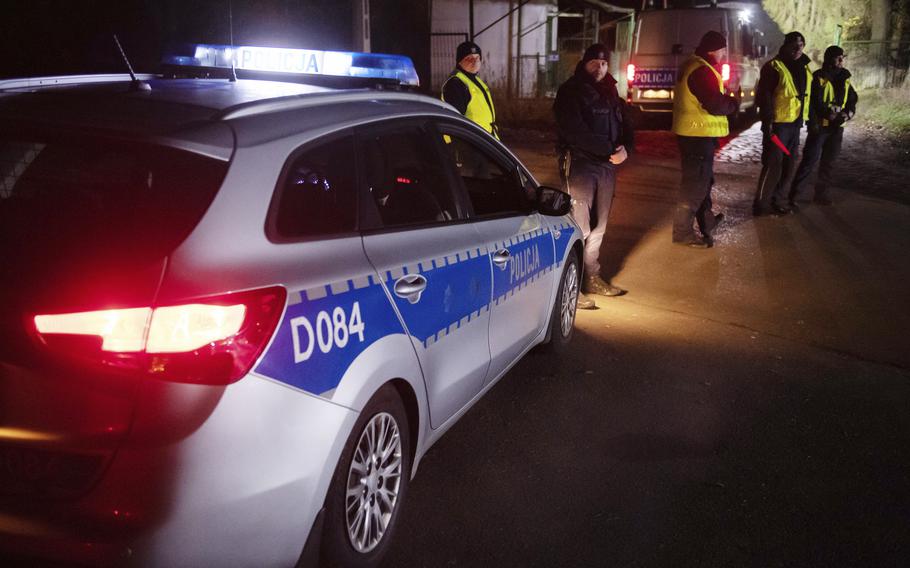 A Ukrainian air defense missile launched to stop a Russian rocket assault was the likely cause of two deaths in eastern Poland, NATO’s top official said Wednesday, as world leaders called for an investigation into the incident that came during Moscow’s continued bombardment of Ukraine’s power grid.

“Of course, Ukraine has the right to shoot down those missiles that are targeting Ukrainian cities and critical Ukrainian infrastructure,” Stoltenberg told reporters after high-level talks at NATO’s Brussels headquarters.

Polish President Andrzej Duda in earlier remarks Wednesday said there was no indication that the missile was fired intentionally into Poland.

“Most likely, it was a Russian-made S-300 missile,” Duda said. “At the moment we have no proof that it was a rocket launched by the Russian side.”

On Tuesday, a missile landed in the Polish border town of Przewodow, sparking concerns inside NATO that Russia’s war on Ukraine was threatening to spill over into alliance territory.

It remains unclear where the rocket was fired from, but President Joe Biden said Tuesday it was unlikely to have launched from inside Russia. And three U.S. officials told The Associated Press that initial assessments suggested the missile was fired by Ukrainian air defense forces taking aim at incoming Russian fire.

Ukrainian President Volodymyr Zelenskyy disputed the preliminary findings and demanded evidence. He told reporters he had “no doubts” about a report he said he had personally received from his top commanders “that it wasn’t our missile or our missile strike.”

Ukrainian officials should have access to the site and take part in the investigation, he added.

"Let’s say openly, if, God forbid, some remnant (of Ukraine's air-defenses) killed a person, these people, then we need to apologize. We are honest people after all. But first there needs to be a probe, access — we want to get the data you have,” Zelenskyy said.

On Tuesday, Zelenskyy had called the strike “a very significant escalation.”

The explosion in eastern Poland raised questions regarding why NATO’s extensive air defense systems didn’t knock down the incoming rocket. Stoltenberg said the missile, which is used defensively, didn’t have the qualities that allies rely on to identify a threat.

“Our air defense systems in the east, they are set up to defend us against attacks — attacks from missiles, cruise missiles, ballistic missiles, they have special characteristics,” Stoltenberg said.

NATO tracks such threats on a monitor and “then we make a judgment whether it’s an attack, or whether it is something else,” he said.

Since the start of Russia’s full-fledged war on Ukraine in February, the threat of the conflict spilling over into NATO territory has been a worst-case scenario for member states.

Duda’s statement Wednesday all but ruled out the idea that Warsaw could invoke NATO’s Article 5 provision, which states than an attack on one member requires a collective response from the alliance.

“Air defense systems and selected military units, both land forces and the navy, are on high alert. The Polish army is monitoring the situation. We are in constant contact with our allies,” Polish Defense Minister Mariusz Blaszczak said in a statement Wednesday.

Former Soviet-bloc country Ukraine maintains stocks of Soviet- and Russian-made weaponry, including air-defense missiles, and has also seized many more Russian weapons while beating back the Kremlin’s invasion forces.

The Kremlin on Wednesday denounced Poland’s and other countries’ reaction to the missile incident, and in rare praise for a U.S. leader, hailed the reaction from Washington.

“We have witnessed another hysterical, frenzied, Russophobic reaction that was not based on any real data,” Kremlin spokesman Dmitry Peskov told reporters on Wednesday, according to The Associated Press. He added that “immediately, all experts realized that it could not have been a missile linked to the Russian armed forces,” and pointed to a “restrained, much more professional reaction” of the U.S. and Biden.

In Europe, NATO members Germany and the U.K. were among those stressing the need for a full investigation. German Chancellor Olaf Scholz warned against jumping to conclusions “in such a serious matter.”

Still, Scholz and others also laid overall but not specific blame on Russian President Vladimir Putin’s invasion of Ukraine.

“This wouldn’t have happened without the Russian war against Ukraine, without the missiles that are now being fired at Ukrainian infrastructure intensively and on a large scale,” Scholz said.

U.K. Prime Minister Rishi Sunak echoed that assessment, saying: “This is the cruel and unrelenting reality of Putin’s war.”

The Polish government said it was investigating and raising its level of military preparedness. On Twitter, Biden promised “full U.S. support for and assistance with Poland’s investigation.”

A statement from the Polish Foreign Ministry identified the weapon as being made in Russia. Duda, however, was more cautious, saying that it was “most probably” Russian-made but that its origins were still being verified.

“We are acting with calm,” Duda said. “This is a difficult situation.”

Ukrainian air defenses worked furiously against the Russian assault Tuesday on power generation and transmission facilities, including in Ukraine’s western region that borders Poland. Ukraine’s military said 77 of the more than 90 missiles fired were brought down, along with 11 drones.

Damage from the aerial assault in Ukraine was extensive and swaths of the country were plunged into darkness. Zelenskyy said about 10 million people lost power but tweeted overnight that 8 million were subsequently reconnected, with repair crews laboring through the night. Previous Russian strikes had already destroyed an estimated 40% of the country’s energy infrastructure.

The Russian bombardment also affected neighboring Moldova. It reported major power outages after the strikes in Ukraine disconnected a power line to the small nation.

The assault killed at least one person in a residential building in Ukraine’s capital, Kyiv. It followed days of euphoria in Ukraine sparked by one of its biggest military successes — the retaking last week of the southern city of Kherson.

With its battlefield losses mounting, Russia has increasingly resorted to targeting Ukraine’s power grid, seemingly hoping to turn the approach of winter into a weapon by leaving people in the cold and dark.