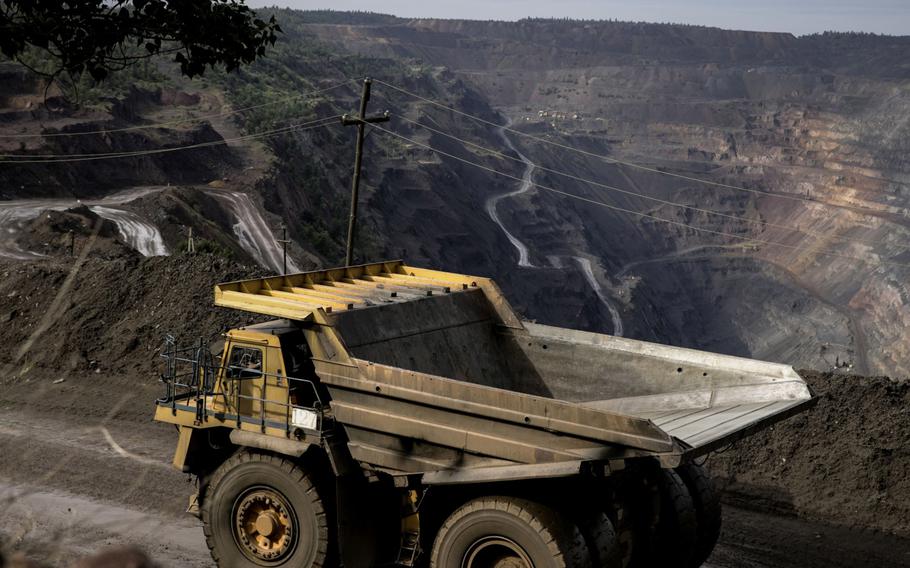 A dump truck travels along an access road to source building materials from the borrow pit of the Central Mining Enrichment Plant, operated by Metinvest Holding, in Kryvyi Rih, Ukraine, on June 30, 2022. (Julia Kochetova/Bloomberg)

Ukraine’s largest steelmaker lost half its business during Russia’s war. So you’d think the main fear Metinvest’s chief executive Yuriy Ryzhenkov has right now would be of a renewed assault that deals yet another hammer blow to the firm’s survival. It isn’t.

“The biggest worry is the possibility of fatigue in the West, if they get fed up with supporting Ukraine and try to impose a solution by cutting off supplies of weapons,” Ryzhenkov said during an interview in London. Metinvest has steel mills in the U.K., Italy, the U.S. and Bulgaria, in addition to Ukraine.

Most Ukrainians agree. Asked whether the country should continue the war or negotiate a ceasefire to halt the shelling of their cities, 86% of respondents favored continuing to fight, according to an Oct. 21-23 telephone survey by the Kyiv International Institute of Sociology, a polling agency.

But concern over flagging Western resolve has been rising in Ukraine, because despite public assurances of unwavering support from Washington to Berlin, there have also been calls for early negotiation.

Last week, America’s top soldier, Chairman of the Joint Chiefs of Staff Mark Milley said he saw a “window of opportunity” for peace talks, arguing that military victory was “unachievable” for either side. Turkey’s President Recep Tayyip Erdogan has offered his services as mediator.

In a briefing on Tuesday, Western officials said that despite Ukraine’s repeated ability to surprise, they expect the war to grind through the winter, with neither side able to win through 2023. They also said that the speed at which each can replenish dwindling stocks of weapons and munitions would likely prove decisive.

In Ukraine’s case those will have to come primarily from the U.S. and Europe. The nation’s top commander, Valeriy Zaluzhnyi, told Milley in a Monday phone call that there could be no negotiation unless Russia withdraws from all Ukrainian territory, according to readout on the Facebook page of Ukraine’s general staff.

“It’s impossible to trust Russia’s words, and there will be no Minsk-3, which Russia would violate immediately after signing,” Ukraine’s President Volodymyr Zelensky told foreign leaders this week at the Group of 20 summit in Indonesia by video. He was referring to the two so-called Minsk agreements of 2014-2015, which created a cease-fire line aimed at ending a Russia-backed insurgency in the eastern Donbas region.

With the recent recovery of Kherson, Ukraine has recaptured half the territory Russian forces took at the peak of President Vladimir Putin’s Feb. 24 invasion, according to Rochan Consulting, a Polish group that tracks the war. Russia, meanwhile, has a new commander with a more realistic strategy and hundreds of thousands of new conscripts that should flow onto the battlefield through the winter.

Metinvest’s production capacity fell by half earlier this year when defenders of Mariupol made their last stand at its Azovstal factory. Its next biggest furnaces are running at half capacity in Zaporizhzhia, a city under increased attack from Russian missiles.

The company is surviving mainly because of its in-demand coal mining business. But for Metinvest -- and Ukraine’s economy more widely -- according to Ryzhenkov, the problem with a negotiated cease-fire is that without a full Russian withdrawal, Ukraine would be uninvestable for the foreseeable future.

“We made that mistake once before, in 2014,” Ryzhenkov said, again referring to the Minsk deals. The so-called line of contact those agreements created between Ukraine and separatist held territory began just 20 miles from Mariupol.

“We continued our investments in Mariupol on the assumption that there was a new border line,” Ryzhenkov said. Speaking to Bloomberg just weeks before the war, he had been so confident Russia wouldn’t invade that he said he was building a $1 billion rolling mill at Azovstal.

Investors won’t risk making that mistake again, according to Ryzhenkov. That’s especially true in the war-ravaged south east, where many businessmen -- including Metinvest’s controlling shareholder Rinat Akhmetov -- were closely identified with Ukraine’s pro-Russia political parties, until Putin annexed Crimea and fomented conflict in the Donbas, in 2014.