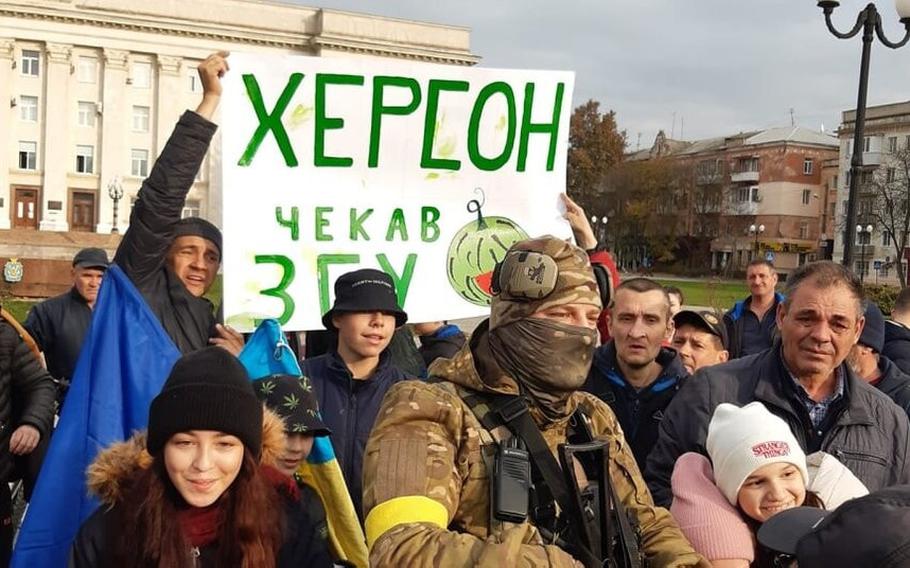 A Ukrainian soldier poses for pictures with citizens of Kherson, Ukraine, on Nov. 11, 2022. (Facebook)

Kherson was the sole Ukrainian regional capital that Russian forces had managed to capture since the start of the invasion on Feb. 24, and relinquishing the city to Kyiv shattered the illusion of control Putin tried to create by staging referendums and illegally declaring Kherson and three other regions — Luhansk, Donetsk and Zaporizhzhia — to be annexed and absorbed into Russia.

Although Russian forces still control the broader Kherson region, which forms part of Putin’s coveted “land bridge” from mainland Russia to illegally annexed Crimea, forfeiting the capital city is a stunning blow after repeated, blustery declarations by pro-Kremlin figures that Russia would stay in Kherson “forever.”

Moscow’s hard-line pro-war faction, including nationalist military bloggers, called the surrender of the city a “betrayal” and a “black day.” Kherson, along with the other illegally annexed regions, was written into the Russian constitution as part of Russia, after the parliament affirmed Putin’s annexation plans.

Kherson’s flag, along with those of the three other regions, was raised recently during a ceremony in the State Duma.

While other leaders might suffer serious repercussions, the Kremlin for weeks carefully prepared the Russian population for the shock, distancing Putin from responsibility and trying to insulate him from political fallout. Still, there were signs that Putin would not entirely escape responsibility and that the Kherson defeat could fan opposition to the war, which has risen slowly amid repeated battlefield setbacks.

“I think this will seriously complicate how the situation is viewed inside the country,” said one influential Moscow businessman, declining to be named because of possible consequences in a paranoid, increasingly totalitarian state. “It is a serious loss.”

“For Russia, these losses have a sacred character,” the businessman added. “It is a big blow to the image of Putin.”

The retreat from Kherson city was the latest in a string of military collapses for Putin, including Russia’s failed attempt to seize Kyiv, the Ukrainian capital, early in the war, and Ukraine’s lightning rout of Russian forces from the northeast Kharkiv region in September.

The territorial losses in Kharkiv led Putin to declare a messy conscription drive that prompted hundreds of thousands of men to flee Russia and sent tens of thousands of poorly trained troops to fight in Ukraine.

Many ordinary Russians still see Putin as a clever, czar-like figure who loves his motherland but is perennially let down by venal, incompetent officials, according to analysts, who said the Kremlin’s propaganda efforts had seemingly worked to minimize the public’s concerns about the Kherson surrender.

But the many military failures in an unnecessary war are obvious to Moscow’s elite billionaires and state officials. Equally clear are the political difficulties created by Putin’s annexations, a flagrant violation of international law now exposed as a delusion.

Amid military retreats, bungled mobilization, deepening economic difficulties and mounting casualties, Moscow is increasingly signaling a readiness for talks with Ukraine. But negotiations are unlikely while Putin clings to his position that Kyiv must accept his illegal seizures of territory.

Putin stayed away on Wednesday as Defense Minister Sergei Shoigu and the top Russian army commander in Ukraine, Col. Gen. Sergei Surovikin, performed an awkward, robotic dialogue on Russia 24 state television, formalizing the decision to abandon Kherson “to save lives.”

As Shoigu approved the surrender, Putin visited the federal center for brain and neuro technologies to mark the 75th anniversary of the Federal Medical-Biological Agency. It was unclear whether the Russian president was totally out of touch or intentionally putting himself out of reach of the military decision.

Former Kremlin adviser Sergei Markov, speaking in an interview, described the surrender of Kherson as “the largest geopolitical defeat of Russia since the collapse of the U.S.S.R.,” noting Putin’s personal guarantee that the territory would always be part of Russia.

Putin, however, remains protected by his coterie of security and military leaders and has shown no outward sign of changing course.

Political analyst Andrei Kolesnikov, of the Carnegie Endowment for International Peace, recently compared Putin’s increasingly closed, paranoid behavior to Stalin in his final years, in which “all decisions are taken by one person.”

But, despite the outrage among hard-liners over the surrender of Kherson, Kolesnikov said ordinary Russians appeared convinced, at least for now, by the military’s explanation that the surrender was needed to save lives.

Putin’s popularity was “fairly solid,” he said, declining to 77% from 83% during September’s bungled mobilization, before creeping back up to 79% last month.

A Russian state official said the decision to surrender Kherson “means there is still rational thinking in the command. If the president is part of this, then there is hope, though the ghost of a chance, that he is ready for talks.”

But the state official added that he did not think Putin would not accept Ukraine’s conditions to fully withdraw Russian forces from Ukraine or even retreat to prewar lines, because that would be a “massive political blow” that he might not survive.

Many members of the elite are privately critical of Putin’s catastrophic war and the resulting sanctions, underscoring the split between Russia’s hard-line pro-war faction and the business executives and bureaucrats desperately hoping for an off-ramp and an end to global ostracism.

The businessman said Moscow was banking on Ukrainian resistance crumbling in winter because of missile strikes on Ukrainian civilian energy facilities, although there is no evidence this will happen.

Another prominent Russian businessman said he believed the Biden administration was pressing Ukraine to begin negotiations, citing comments on Wednesday night by Gen. Mark A. Milley, the chairman of the Joint Chiefs of Staff, that the winter presents “a window of opportunity” for the sides to begin talks. Western officials, however, have said it is Kyiv’s decision.

Russians were tired of the war, the second businessman said, and Putin’s position was “on the brink of catastrophe.”

“From the military point of view, there are a lot of corpses. I think he is ready for some kind of deal,” the second businessman said, adding that Putin likely realized that a decisive military victory was impossible.

Analyst Tatiana Stanovaya, the founder of the R. Politik political analysis group, said the sense of betrayal among Russia’s “party of war” posed no threat to Putin, who remains convinced that Ukraine will lose Western support next year, forcing Kyiv to capitulate to his terms.

Stanovaya said Putin merely wanted to buy time until Western support for Ukraine disappeared, while Kolesnikov dismissed Putin’s signals he was ready to negotiate as “pure PR,” with the sides too far apart.

Stanovaya said Putin did not expect Russia to win the war through military means but regarded Ukraine as a nonstate that would eventually collapse.

The liberation of Kherson city fueled speculation about how much farther Ukraine’s military might advance before winter. Kyiv’s forces also have been making some gains in the east.

Markov, the former Kremlin adviser, said Putin would try to retain the remaining annexed territories, once the Russian army was reinforced with trained forces in coming months. But it was not clear that Russia could arm them with the necessary weapons, he said.

“If he discovers that the Russian economy can’t give these troops military technology, then he will be forced to enter into negotiations for peace,” Markov said, adding that Putin might even be forced to accept withdrawing to positions Russia held before the Feb. 24 invasion. This includes the regional capitals of Luhansk and Donetsk, which Russian-backed separatists have controlled since 2014.

“The withdrawal to the Feb. 24 line would be seen as a serious loss but not capitulation,” he said. “It would be a very tough condition. But it is possible.”