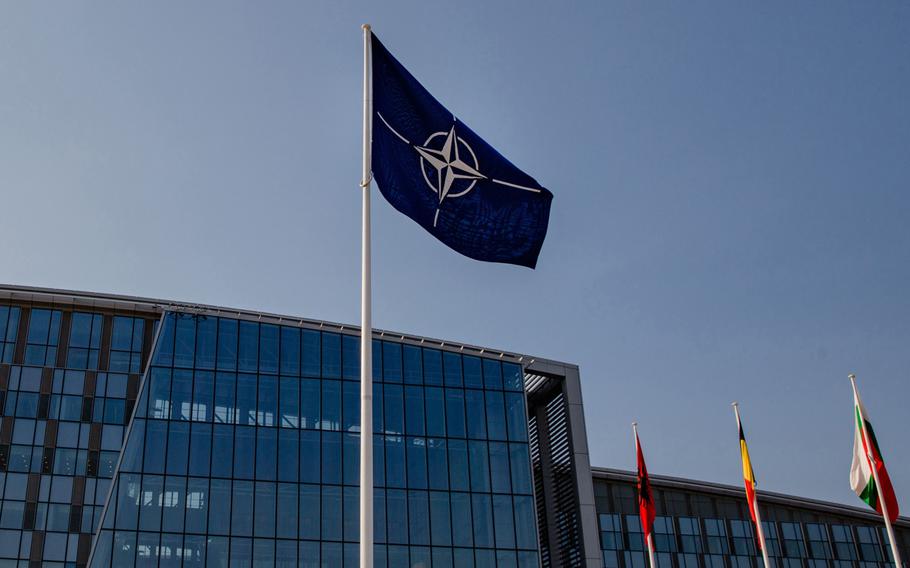 Ukraine’s NATO partners are set to discuss more air-defense systems for the fight against Russia this week, but there won’t be any meaningful progress on a 14-year-old pledge to let Kyiv join their alliance.

NATO foreign ministers are holding two days of talks from Tuesday in Bucharest, the site of a 2008 summit at which Ukraine and Georgia were both promised they would eventually be granted membership. Ukrainian President Volodymyr Zelensky lodged a formal request for the alliance to make good on that agreement in September.

At the meeting, NATO is set to reiterate that its door remains open but now is not the time for Ukraine to join, according to people familiar with the preparations. Allies have treated Ukraine’s renewed request with caution, since the bloc’s collective defense commitments could drag them into a direct conflict with Russia. The prospect of NATO membership for Ukraine has repeatedly been cited by President Vladimir Putin as a threat to Moscow.

Mykhailo Podolyak, an adviser to Zelensky’s chief of staff, argued that Ukraine’s military experience would make it an asset to NATO.

Yet there’s a school of thought that the agreement thrashed out by leaders including George W. Bush and Nicolas Sarkozy was itself a strategic mistake that paved the way for the current conflict.

At the time, German Chancellor Angela Merkel was among those pushing back against membership for Ukraine and Georgia on concerns it would be too escalatory. Leaders agreed the countries would become NATO members, but held back on offering concrete steps or a membership action plan. Putin, who also attended, warned that NATO expansion would force Russia to respond with measures to protect its security.

Historian Mary Elise Sarotte told NPR radio in March the outcome was the “worst of all possible worlds.” Putin took the statement at face value, Sarotte said, and used it as justification for military action in Georgia later that year. That turned out to be a clear precursor for the future conflicts in Ukraine, she added.

In light of Russia’s invasion of Ukraine, some allies are pushing to give Kyiv a more direct path to membership, according to a senior European diplomat, but there is no consensus. Members are agreed however that the focus right now should be on helping Ukraine win the war, the diplomat said.

Speaking to reporters ahead of the meeting in Bucharest, Slovakian Foreign Minister Rastislav Kacer said allies must take Ukraine’s application seriously, adding they should “help Ukraine go through the process of coming as close as possible to the membership so that when they and we are ready, the transition to full membership will be very smooth and easy.”

His counterpart from Slovenia, Tanja Fajon, said her country would be open to the discussion about membership “once the timing is proper.”

The leaders of nine eastern European countries, including Poland, the Baltic states, and Romania, signed a joint statement following Zelensky’s application, saying they firmly stand behind the decision of the 2008 Bucharest NATO summit.

“The way to help to move Ukraine toward membership is to work with them, both on the political partnership and on the practical support,” NATO Secretary General Jens Stoltenberg said Friday when asked whether allies could agree to a more concrete road map.

Stoltenberg said in addition to short-term support, NATO is looking into how to step up long-term cooperation with institution building and reforms and, crucially, to help the military transition from Soviet-era equipment to NATO standards, doctrines and equipment. “That will also increase interoperability between Ukraine and NATO and help Ukraine to move toward Euro-Atlantic integration,” he said.

NATO allies may eventually pledge to support Ukraine’s military so that it can defend itself against any future aggression in the long term, but discussions likely won’t be agreed before leaders gather in Vilnius next summer, the diplomat said.

This week, the focus will instead be on short-term support to help Ukraine win the war against Russia.

Ministers will also discuss the resilience of NATO allies as well as support for other vulnerable partners in the region, such as Georgia and Moldova. Talks on China are on the agenda too.

Foreign ministers from the Group of Seven wealthy nations will meet on the sidelines with several other allies to discuss energy and food security for Ukraine, as the country’s power and water infrastructure comes under severe attack from Russian missile strikes.

“The biggest support for us now is the support of the military and industrial complex of NATO countries: production of projectiles, transferring air defense, lifting the taboo on supplying modern tanks, armored vehicles and long-range weapons,” Podolyak said.