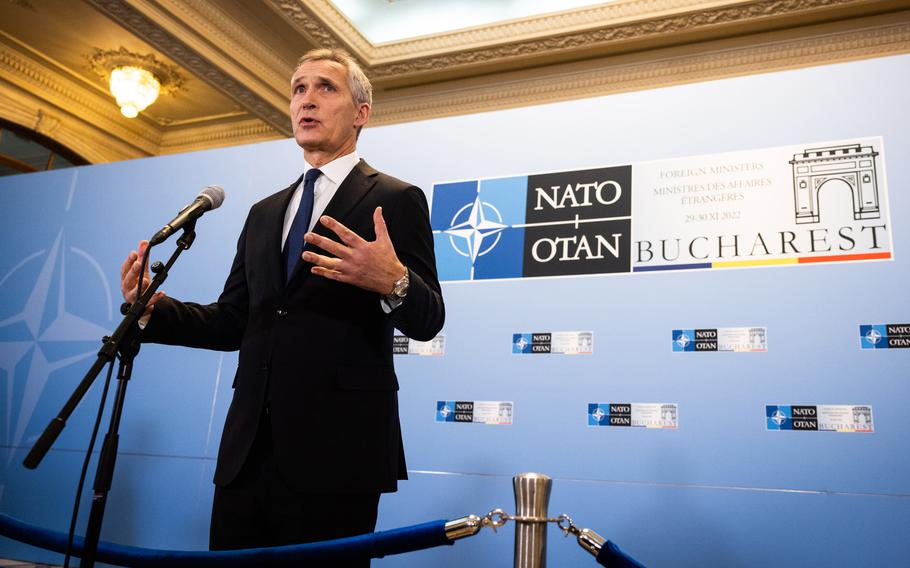 The U.S. and its European allies agreed Tuesday to hurry more supplies into Ukraine to help rebuild an energy system that has been ravaged by Russia’s bombardment of civilian infrastructure.

“We need to support Ukraine because what we see is President (Vladimir) Putin trying to use winter as a weapon of war, which is inflicting a lot of suffering on the Ukrainian people,” NATO Secretary-General Jens Stoltenberg said Tuesday at the start of high-level talks in Bucharest.

Stoltenberg, who is leading the meeting of 30 NATO states, pointed to nighttime satellite imagery of a blacked-out Ukraine to highlight the enormity of the challenge at hand.

“It is a huge task to rebuild all of this,” he said.

U.S. Secretary of State Antony Blinken, who is leading the American delegation at the two-day meeting of NATO foreign ministers, also is expected to announce further aid to help Ukraine rebuild its energy grid.

In addition, allies made new pledges in Bucharest for sending more air defense systems and other weaponry to Ukraine.

The meeting in Romania comes 14 years after NATO members during a 2008 summit in Bucharest declared that Ukraine will one day become a member of the security pact. The assertion, pushed at the time by President George W. Bush despite opposition from Germany and France, was made with no plan for Ukraine’s entry.

Stoltenberg reaffirmed NATO’s support for Ukraine and its commitment to an “open door” policy, but offered no indication that membership for Kyiv is imminent.

“We stated that Ukraine will become a member,” Stoltenberg said. “I expect allies to reiterate also that position. However, the main focus now is on supporting Ukraine. We are in the midst of a war.”

For the past decade, NATO has made a point of stating it remains committed to the idea of Ukraine membership while also taking no steps to make it a reality. Unmentioned by Stoltenberg is that opposition to Ukraine’s membership by key members like Germany and France make it a near political impossibility for the country to join, given that membership requires unanimous approval by allies.

In Bucharest, alliance member officials also met with Ukrainian Foreign Minister Dmytro Kuelba, who came to Romania to press for even more military aid than what NATO countries have thus far been prepared to offer.

In an interview with Politico on the eve of the NATO talks, Kuleba said the alliance must ramp up weapons production to ensure sufficient stocks for long-term support. 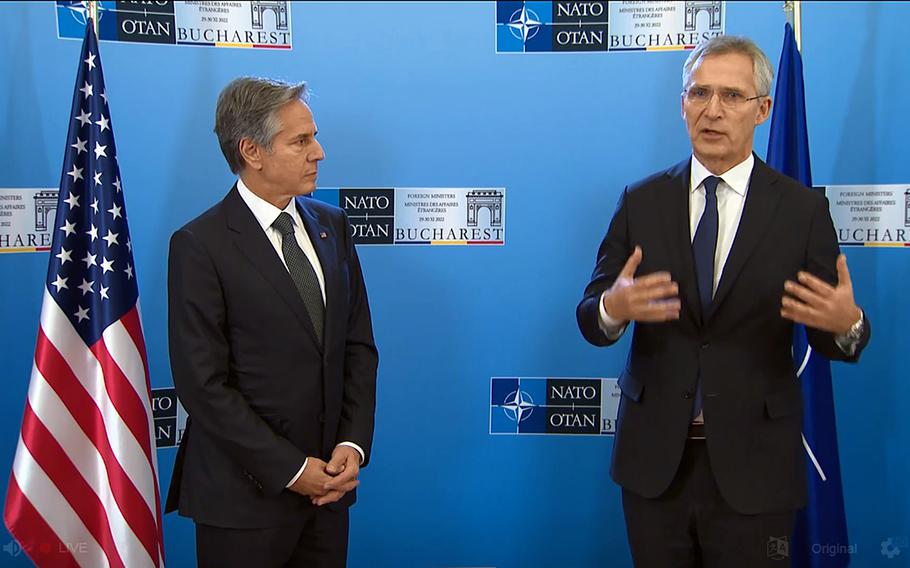 The depletion of munitions from U.S. and other allied countries’ stockpiles has emerged as an urgent concern.

Specifically, Kuleba said he would tell allies that his country needs air defenses, tanks and production lines. So far, the U.S. and other allies have balked at sending advanced battle tanks into Ukraine, though some Western aid has been used to refurbish Soviet-era tanks.

Some members said they will press for bigger contributions.

Stoltenberg said he anticipated more Russian attacks on civilian targets in the weeks ahead, a move he described as a sort of last resort by Putin after Russia’s repeated failures and lost ground on the battlefield.

The NATO chief also said Moscow is contending with its own ammunition shortages.

“He is responding with more brutality, attacking gas infrastructure, power lines, and trying to deprive the Ukrainians of water, electricity, lights and heating,” Stoltenberg said.

Following talks on Ukraine on Tuesday, allies will turn their attention Wednesday to China as Western leaders look for ways to reduce allied dependency on Beijing.

As the war in Ukraine has exposed Europe’s dependence on Russian energy, allies say steps must be taken to ensure that similar mistakes aren’t made with China.