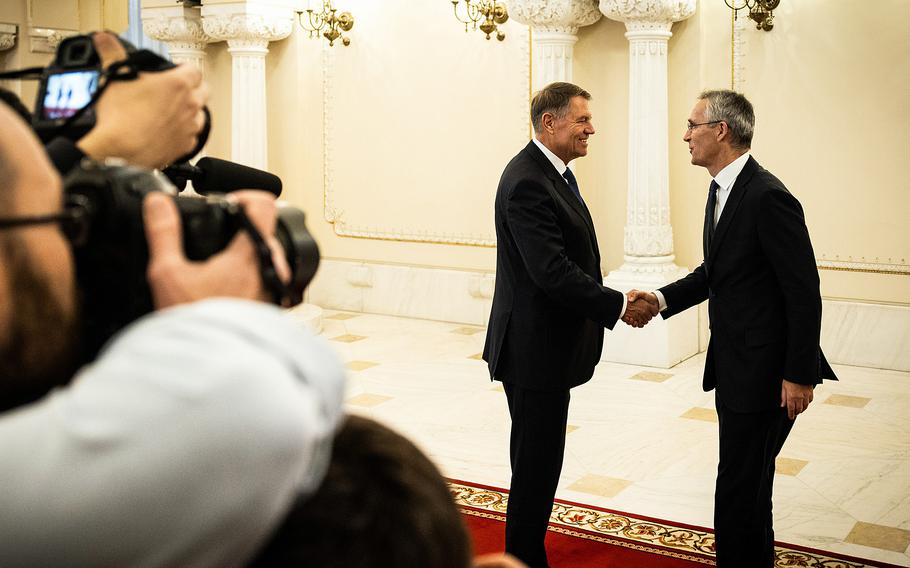 NATO Secretary-General Jens Stoltenberg meets with Romanian President Klaus Iohannis in Bucharest, Romania, on Nov. 28, 2022. Iohannis, who is hosting a meeting of allied foreign ministers, told reporters that “much more concrete and courageous” decisions are needed on how to reinforce his country and others in the region, in light of Russia’s war on Ukraine. (NATO)

President Klaus Iohannis, who is hosting the meeting in Romania’s capital, told reporters that “much more concrete and courageous” decisions are needed on how to reinforce his country and others in the region because of the Russia-Ukraine war.

Allies have already taken numerous steps to do that since the start of the full-fledged invasion of Ukraine by Russia in February. Among the measures: new NATO multinational battlegroups and additional rotational American forces, including the 101st Airborne’s deployment to Romania. But Iohannis said those initiatives aren’t sufficient on their own.

Iohannis said those plans need to be further developed so that “we are not making these decisions at the last possible moment.”

Secretary of State Antony Blinken will lead the U.S. delegation in Bucharest, where members are expected to agree to additional support for Ukraine and take stock of efforts to deter more further Russian aggression.

The meeting comes as the war in Ukraine enters its 10th month.

NATO Secretary-General Jens Stoltenberg said Monday that allies in Bucharest are prepared to contribute more to the Ukrainian military, which has received billions in weaponry already from the U.S. and other allies this year.

He said allies also will address ways to increase support for other partners facing Russian pressure, such as Bosnia and Herzegovina, Georgia and Moldova.

“We cannot let Putin win,” Stoltenberg said. “This would show authoritarian leaders around the world that they can achieve their goals by using military force.”

The talks in Bucharest come nearly 15 years after Ukraine was at the center of a different NATO gathering, where Kyiv’s potential membership in the alliance was put on the table.

During NATO’s 2008 Bucharest summit, Ukraine was offered assurances that it will one day become a member of the security pact. Yet there is no indication that Kyiv is any closer to joining the alliance than it was when former President George W. Bush pressed allies to open an accession pathway for Ukraine.

Formal NATO membership requires a consensus of all 30 alliance countries. And given that there is disagreement among members about letting Ukraine join, its bid appears to be on indefinite hold.

NATO officials have stuck to the same script for more than a decade, saying that NATO’s open-door policy is intact and that Russia has no say on other countries’ membership eligibility.

Julianne Smith, the U.S. ambassador to NATO, said Monday that “allies are continuing to reaffirm their commitment to what happened in this city in 2008, where the alliance committed to have Georgia and Ukraine join the alliance.”

But the focus now is on practical support for the Ukrainian military and people, she said.

“That is our top priority, and while the war is ongoing, that’s where we’re going to channel our energy,” she said.