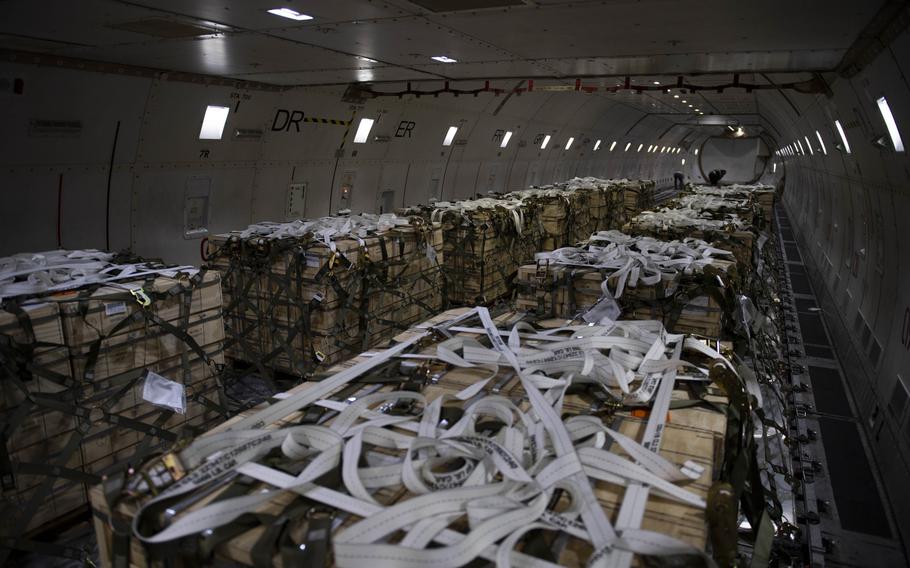 Pallets of ammunition, weapons and other equipment bound for Ukraine are secured onto a plane during a foreign military sales mission at Dover Air Force Base, Del., on Feb. 28, 2022. Since 2014, the United States has committed more than $5.4 billion in total assistance to Ukraine, including security and nonsecurity assistance. (J.D. Strong II/U.S. Air Force)

WASHINGTON — U.S. European Command is at the center of ongoing international efforts to provide Ukraine with the weapons and other security assistance that the country needs to fight Russia, a senior U.S. defense official said Friday.

The combatant command is “building on the foundation of the liaison officer network that they have built up over time with allies and partners” to enable nations to coordinate to better determine what capabilities Ukraine still needs, the official said.

“They are leveraging that to build this coordination cell to be able to have real-time understanding of what allies are prepared to provide and how they might be able to get it to Ukraine,” the official said.

EUCOM is also involved in determining how to best deliver the security assistance package to Ukrainian forces with international partners. Since the start of the war, 14 countries have sent equipment to Ukraine, the official said without naming the nations.

“At the tactical level, EUCOM is coordinating alongside the [United Kingdom] in particular, in terms of the specific delivery process to ensure that we are using our resources to maximum efficiency to support the Ukrainians in an organized way,” the official said.

That organization and coordination helps ensure Ukraine gets what it needs without overlap from multiple countries, but it’s not a new concept, the official said.

“For the past several years, we've been working closely with the United Kingdom, Canada, Lithuania and Poland to collaborate on security assistance and to work together with the Ukrainian Ministry of Defense to identify what their priority capability needs are,” the official said.

That practice has enabled the partners to better keep up with the requests for capabilities that are coming “faster than ever before,” the official said. “We've been working with Ukrainians for years now to understand what their military needs in the event of defending Ukraine against a Russian invasion, so we've been able to build on that understanding and then dramatically speed up our processes to feel the capabilities.”

It's the first time that the U.S. has spoken openly about its role in facilitating international security assistance packages to Ukraine since Russia invaded last week. Roughly 92% of the forces that Russia had tapped for the assault are now inside Ukraine, the Pentagon said Friday.

The assistance given in that package comes from equipment that the U.S. already has available in its military’s stocks, the official said. Biden’s package approved last week was the largest single package given in U.S. history.

About $240 million of the $350 million package has arrived in Ukraine during the past several days, “so you can see how fast we are moving to get those capabilities to the field,” the official said. The remaining capabilities will be delivered next week.

In contrast, it took about a month to deliver much of a similar $200 million drawdown package that Biden approved for Ukraine in late December, and the U.S. is “still delivering some ammunition from that package” now.

“I just have to say how tremendously proud the entire team here at the Pentagon is of our ability to provide security assistance to the Ukrainian armed forces, and how impressed we are with how they are fielding these capabilities right now as we speak,” the official said.

To help the State Department determine what to send, the Pentagon conducts “a careful analysis of what capabilities we should specifically include in the package [and] what capabilities we have available because drawdown is taken from the stocks of the services,” the official said.

The supplies and weapons take a shorter amount of time to deliver to foreign countries because we’re “not going out on the market and purchasing new items — we have to actually have it in hand to be able to deliver it,” the official said.

However, these efforts inherently deplete the U.S. military’s weapons reserves, so the Biden administration has recently requested additional funding to restock the weaponry, according to the official, who did not say how much pertinent equipment remains in the reserve.

“We do plan on continuing to provide presidential drawdown assistance to the Ukrainians, and we are seeking the assistance from the U.S. Congress to replenish the stocks that we have been providing to date from the military departments,” the official said.

The assistance packages have made an impact on Ukraine’s ability to thwart Russia’s advance, which has been stalled in northern and eastern Ukraine for days.

“I think all of us have been tremendously impressed by how effectively the Ukrainian armed forces have been using the equipment that we've provided them,” the official said. “Kremlin watchers have also been surprised by this — at how they have slowed the Russian advance and performed extremely well on the battlefield.”

Defense officials have declined to publicly list all the types of weaponry that have been included in the assistance package for operational security reasons but have said many included Javelin anti-tank missiles and other ammunition.

A separate senior defense official on Thursday declined to confirm recent reports the U.S. has sent FIM-92 Stinger missiles in those packages.

"I can only say that we continue to provide Ukraine systems that they need to defend themselves, and that includes systems and weapons that they can use to deal with the threats on the ground as well as airborne threats," the official said. “That’s as far as I’ll go on that.”