Getting weapons to Ukraine: Western allies scramble to deliver 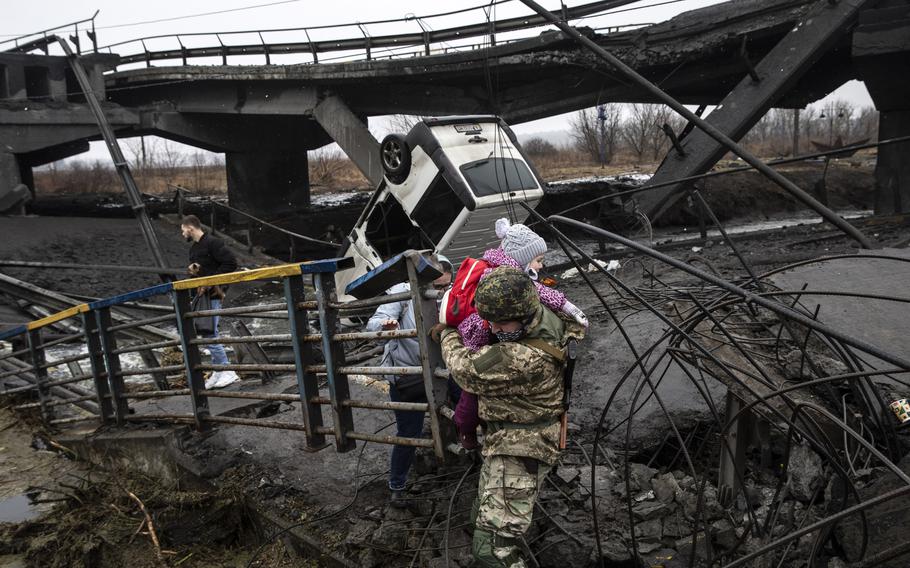 A Ukrainian commander carries a young girl as he helps people flee across a destroyed bridge on the outskirts of Kyiv, Ukraine, on Thursday. Ukrainian forces say Russian fighters destroyed the bridge. (Heidi Levine/for The Washington Post)

“The 8th [American] bird has arrived in Kyiv!” Reznikov exulted on Feb. 5. “Our partners from #USA have sent more than 650 tons of defense ammunition to Ukraine! To be continued.”

The 8th bird has arrived in Kyiv! The weight of today's cargo with ammunition for our @ArmedForcesUkr is 86 tons! Since January 22, our partners from #USA have sent more than 650 tons of defense ammunition to Ukraine! To be continued 🇺🇦🤝🇺🇸 @SecDef @DeptofDefense @WhiteHouse pic.twitter.com/BvVOzQTdrx

The last such message came on Feb. 23, the day before Russia invaded.

The birds from #Latvia landed!Def ammunition & other important things ✅. And the most weighty gift is Stingers!Thank You, our close friends & partners! And of course thanks to @Pabriks!
The whole world understands that the security of Europe depends on strengthening 🇺🇦 defence! pic.twitter.com/zWUaPP0WiC

There have been no known air deliveries since then. Ukraine’s airspace is now part of a war zone that no Western nation wants to enter, even as the United States and its allies and partners pledge to deliver more weaponry for the fight.

NATO territory to the west — where Ukraine borders Poland, Slovakia, Hungary and Romania — provides the only still-uncontested ground access. But east-west roads that can handle truck transport into Ukraine are few, and most are clogged with refugees fleeing the country.

“There are stockpiles in Poland,” where much of the weaponry coming from outside is being gathered, said Ed Arnold, a research fellow of European security at Britain’s Royal United Services Institute. From there, “there are only two main supply routes to Kyiv,” one near the Belarus border, and a second farther south.

Internal Ukrainian logistics “have been OK thus far, but need to improve rapidly,” Arnold said. “They might have three days of ammunition left in some areas.”

No one wants to say exactly how the military assistance is moving. “It kind of needs to be something that we say that we are doing,” British Armed Forces Minister James Heappey said in a Monday interview with British Forces radio. “We don’t necessarily tell you exactly what, where, when and how.”

Before the invasion began, Britain air-delivered 2,000 NLAW antitank missiles, which combat photographs indicate are now in use by Ukrainian forces. “We’ve actually been flowing more stuff forward, uniforms, protective equipment, some munitions and weaponry,” Heappey said. “We reach a stage now, though, where because combat operations are ongoing, routes for the Ukrainians to get the stuff into the country are much more challenging.”

At least 22 NATO nations and a handful of others have said they will send military assistance to Ukraine, from antitank missiles to artillery ammunition to Stinger surface-to-air missiles. Last week the United States announced $350 million in new shipments that it says are already arriving.

Germany, reversing its longtime hesitation to send arms into conflicts, said Saturday that it would send 1,000 antitank weapons and 500 Stingers. They went over the border Wednesday. The European Union agreed this week to reimburse its member states up to $555 million for military and humanitarian aid, a decision that leaders said they hoped would speed the flow of assistance.

The United States is handling much of its own distribution through the U.S. European Command, which is coordinating with NATO, a State Department official said. The European Union has set up a coordination center to try to match what Ukraine says it needs to what member nations can offer. Poland has established a logistics center to collect much of the assistance and spirit it over the border, two E.U. policymakers said.

The State Department official, one of several U.S. and foreign officials who spoke about the sensitive internal allied discussions on the condition of anonymity, said there was helpful “muscle memory” for assistance from the United States, developed in the eight years since the end of Ukraine’s pro-Russian government.

“Right now, we’re in a place where there have been a number of requests flying in from various channels,” the official said, including the Ukrainian Defense Ministry, the presidency, the Organization for Security and Cooperation in Europe and the Ukrainian Embassy in Washington.

In addition to drawing on its own weapons stocks, the United States has to approve the transfer of any U.S.-origin equipment from third countries.

“When we get that list of current needs, we’re going through and figuring out: what partners do we know that have U.S. origin equipment to meet the requirement, then reaching out to individual countries and saying ‘Ukrainians are in need of, say, antitank missiles. We know you’ve got 300 of them, do you have any excess. ... would you consider transferring them?’ “ the State Department official said.

“It’s a fluid situation, but we’re getting it into a good groove right now,” the official said. But “it would be misleading if I left you with the impression this is a perfectly well-organized operation ... We’ve been at this for a week, with things coming constantly. We’re just working as fast as we can.”

A senior U.S. defense official said Friday that the United States was accelerating ammunition deliveries and has facilitated the transfer of Mi-17 helicopters, but no fixed-wing aircraft. Since the attack started last week, 14 countries have sent supplies, the official said. On the U.S. side, a handover process that typically takes weeks or months has been compressed to hours and days.

“I think all of us have been tremendously impressed with how effectively the Ukrainian armed forces have been using the equipment that we’ve provided them,” the official said.

Poland declined to elaborate on its role as a principal conduit of weapons aid. “For security reasons, which are obvious at the moment, we cannot inform you about the details,” the Defense Ministry said in a statement.

“Poland, NATO and EU allies are increasing their political and practical support for Ukraine, which is defending itself against a full-scale invasion by Russia. Our support is an expression of Polish solidarity with Ukraine,” the statement said. “We are providing massive humanitarian aid, hosting refugees and supplying equipment. In this situation, we must also remember responsibility and information restraint in all defense matters. Poland’s security is paramount.”

Britain hosted a 25-nation conference this week to discuss and coordinate meeting Ukraine’s needs, Arnold said, but so far, “it’s not a question of overlap. It is a question of volume.” At the moment, he said, the need is for “food, water, ammunition, and then what we refer to as small arms — rifles, ammunition, grenades, especially shoulder antitank and anti-helicopter aircraft missiles. They’re the things that are most effective ... they’re quite light and anyone can use them.”

Some of Ukraine’s asks are more difficult to provide. Despite reports that the United States, or NATO, is considering sending Patriot surface-to-air missile batteries, a U.S. official said that was not likely. “They don’t come flat-packed with an Allen wrench. You need years of training, and a whole infrastructure for sustainment,” the State Department official said. “Right now, that’s not an option.”

While the need to aid Ukraine has found rare bipartisan support in Congress, some lawmakers have said the help is too little, too late. House Minority Leader Kevin McCarthy, R-Calif. — a fierce opponent of impeaching President Donald Trump in 2020 for using withheld military aid as leverage to force Ukrainian President Volodymyr Zelenskyy to dig up dirt on Joe Biden during the presidential campaign — blamed Ukraine’s current needs on the Biden administration.

“The challenge that we have is, it’s the actions that we could have done before from this administration to make sure today wasn’t happening,” McCarthy said Tuesday on Fox News. “We could have supplied the weapons to Ukraine. They’re not asking for American troops, they’re just asking for the ability to fight.”

The aid, and how to get it to where it is needed, have become sensitive subjects for a NATO alliance that is fearful of getting drawn into a direct confrontation with Russia. Those worries helped convince Hungary not to allow its border to be used to ship military support to Ukraine.

NATO’s leadership has repeatedly emphasized that, despite the shipment of weapons, it is not a party to the conflict. “NATO is not going to send the troops into Ukraine or move planes into Ukrainian airspace,” alliance Secretary General Jens Stoltenberg told reporters in Poland.

A senior NATO diplomat said that Stoltenberg was emphasizing NATO’s lack of belligerence under “hot, clear instructions from the U.S. to do so.”

While thousands of U.S. troops have been sent to bolster front-line NATO states, President Joe Biden said in his Tuesday State of the Union address that “our forces are not engaged and will not engage in conflict with Russian forces in Ukraine.”

Inside Ukraine, “right now, they’re getting infiltration routes set up” to transmit weapons, said Arnold of RUSI. He said there are “probably some organized crime elements to support it ... this is weapons smuggling, essentially. It happens the world over” by people who “either support the cause or think they can make a lot of money out of it. Conflicts like this suck in all types of people.”

Some policymakers in NATO countries fear that if Russia becomes desperate — whether because of a stalled advance inside Ukraine or from painful Western sanctions — it could lash out at Ukraine’s backers by attacking military aid convoys before they reach the Ukrainian border.

“This is something that one should take into account,” a senior European diplomat said.

Latvian Defense Minister Artis Pabriks said in an interview that if Russian President Vladimir Putin wants a pretext to attack NATO, he will find one regardless of what the alliance does.

“I don’t think Russia can accuse us simply about deliveries — simply because it cannot be interpreted as a war between NATO and Russia,” Pabriks said. “But, of course, if they would like to interpret something in a negative way, Putin can always imagine something.”

The Washington Post’s Karoun Demirjian in Washington and Max Bearak in Brzegi Dolne, Poland, contributed to this report.