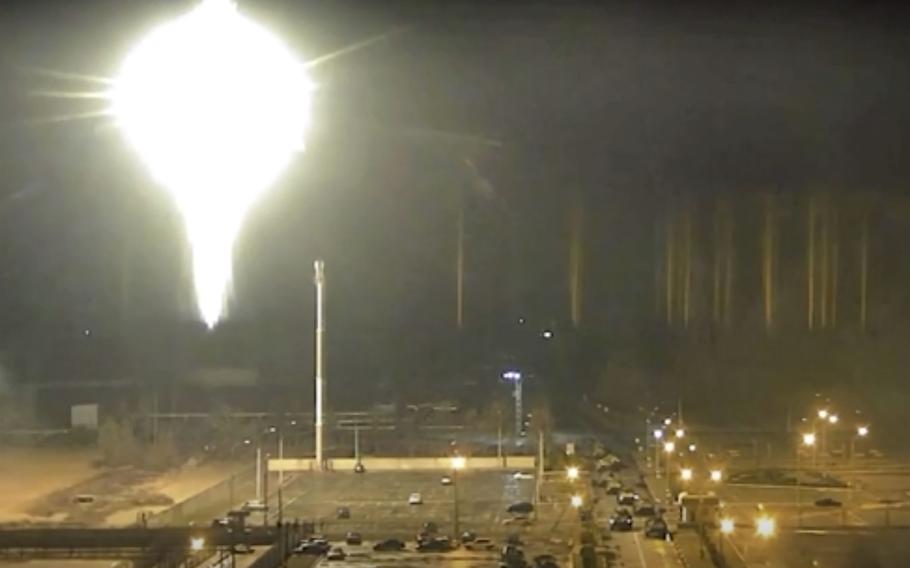 This image made from a video released by Zaporizhzhia nuclear power plant shows bright flaring object landing in grounds of the nuclear plant in Enerhodar, Ukraine, on Friday, March 4, 2022. Russian forces shelled Europe’s largest nuclear plant early Friday, sparking a fire as they pressed their attack on a crucial energy-producing Ukrainian city and gained ground in their bid to cut off the country from the sea. (Zaporizhzhia nuclear power plant via AP)

WASHINGTON — About 92% of the armed forces that Russia assembled for its invasion of Ukraine are now in the country as Russian troops have overtaken the largest nuclear power plant in Europe, a senior U.S. defense official said Friday.

With most of the more than 170,000 troops and weapons that Russian President Vladimir Putin had arrayed now inside the country, the official said Ukrainian civilian infrastructure remains under attack as the U.S. has counted more than 500 Russian missile attacks since the start of the war last week.

“We continue to believe Mr. Putin does not believe Ukraine has the right to exist as a sovereign state,” the official said. “Mr. Putin has made it clear that he wants to take that sovereignty away and … occupy and control Ukraine to supplant its democratically elected government with one appointed by him.”

On Thursday night, Russian forces began firing on a nuclear power plant in Zaporizhzhia, Ukraine, causing a fire to break out in the facility. Tens of thousands of people watched a livestream of the attack on YouTube overnight as Ukraine Foreign Minister Dmytro Kuleba urged Russia to let firefighters through to extinguish the flames.

“Fire has already broke[n] out,” he said on Twitter. “If it blows up, it will be 10 times larger than Chernobyl! Russians must IMMEDIATELY cease the fire, allow firefighters, establish a security zone!”

The fires, which affected buildings at the plant but not the nuclear reactors, were extinguished, the U.S. official said, but Russian forces took possession of the power plant, which is one of the 10 largest in the world.

"We have no reason to doubt Russian claims that they are now in possession of that nuclear power plant, and we do not see any radioactive leakage,” the official said. “There's no excuse to be made for this invasion and the recklessness … the Russians are conducting, to include kinetic attacks and fighting in and around a nuclear power plant.”

Ukrainian President Volodymyr Zelenskyy on Facebook said it was “the first time in history” a nation had “fired upon an atomic power plant’s reactors.”

The U.S. official said the attack on the power plant “just underscores the recklessness of this Russian invasion.”

“Nuclear power plants are, by design, not built to withstand armed conflict,” the official said. “And so while we are not seeing radioactive leakage here and we assess that the Russians are in control of it, that doesn't excuse the move [of] using combat power to try to take a nuclear power plant over.”

While no radioactive leaks were detected, chief Pentagon spokesman John Kirby on Friday said the U.S. does not know whether the power plant is still operable.

The attack was the latest attempt that Russia has made to control key infrastructure and population centers in the week-old war. The U.S. continues to believe Putin aims to overthrow the Ukrainian government and replace it with his own, the official said.

"If your goal is to supplant the government of Ukraine and replace it ... one can surmise that you would want to control the infrastructure and make sure that you can meet your needs — and a nuclear power plant would certainly be on that list,” the official said.

That’s because taking over a nuclear power plant would allow Russia to assert some control over electrical power for Ukraine’s civilian population, thus providing Putin more options, the official said.

“As you’re trying to become an occupying power to be able to control the infrastructure, you could use that to preserve the electrical power going forward and to be able to deliver goods and services to a population,” the official said. “You could also use [the power plant] before you've reached occupation status [by] leverag[ing] in that regard to punish a population to make it harder for that population to resist you.”

Russia on Wednesday for the first time claimed control of a Ukrainian city -- Kherson in southern Ukraine -- with the town’s mayor Igor Kolykhayev saying Russian troops entered city hall that day in a Facebook post.

The U.S. on Friday is not disputing the reports that Russia has overtaken Kherson, the defense official said, but Ukrainians have not stopped fighting the Russian troops in the city.

Kherson is “really the last major population center on the Dnieper River,” which cuts through central Ukraine from the Black Sea in the south and extends through Belarus and into Russia in the north, making it “a key port, in that regard,” the official said.

“[Controlling Kherson] certainly allows the Russian military to have a measure of control over at least that part of the river and the entrance into the Black Sea,” the official said.

The official said Russia also might have taken on Kherson to better enable its now ongoing attack on nearby Mykolaiv, which is home to three shipyards and considered among the main shipbuilding centers of the Black Sea.

“One of the reasons they want Mykolaiv [could be] because that puts them just to the northwest of Odessa,” the official said.

Odessa, in southwestern Ukraine, is the country’s third most populous city and the largest in southern Ukraine, where the official said the Russians have the most advantage.

“They could move on Odessa from the northeast on the ground out of Mykolaiv, but also could potentially reinforce [it with] whatever maritime power they might want to apply against Odessa from the Black Sea,” the official said.

That move would mirror the strategy that the U.S. assesses Russia is using in attempt to take the southeastern Ukraine city of Mariupol, where the Russians did not make a direct amphibious assault the despite its location on the Sea of Azov coastline.

“It [is similar to what] we're kind of seeing around Mariupol, where they made an amphibious assault to the southwest of Mariupol, moved up the coastline, and are now on the outskirts of Mariupol using that naval infantry. But they're also coming down from the north with land forces out of Donetsk,” the official said.

So far, the U.S. has not seen “any significant naval activity in the Black Sea that would lead us to believe an assault on Odessa is imminent,” Kirby said. “That doesn’t mean that that won’t change over the coming hours.”

While Russia has made advances in the south, its troops continue to make “no appreciable movement” in northern and eastern Ukraine, the official said, and the 40-mile Russian convoy traffic jam continues to keep Russian troops about 15 miles outside the capital city of Kyiv.

“Basically, they’re there where they were yesterday, [but] obviously shelling and strikes continue to occur, there's no doubt about that,” the official said.

Fuel and food issues have contributed to the traffic jam as has Ukrainian resistance, the official said. For example, Ukrainians last week blew up a bridge near Kyiv to thwart Russia’s advance toward the city.

“We certainly believe that the Ukrainians blowing up that bridge absolutely had an effect on stopping and curtailing the movement of that convoy, but we also believe that they have hit the convoy at other places as well,” the official said.

Russian troops also remain about six miles outside of the city centers of Chernihiv and Kharkiv in northern Ukraine, the official said.

Russia has still not taken control of Ukraine’s airspace despite NATO denying Ukraine’s requests that they enforce a no-fly zone over the country, the official said.

“The Ukrainians still have a significant majority of their air combat power available to them, both fixed wing and rotary wing, as well as unmanned systems and surface-to-air systems,” the official said. “Of course, they have suffered some losses in all those categories — some of those losses are due to just inoperability, some of it is from Russian actions — but we assess that they have a strong majority of that air combat power available to them.”