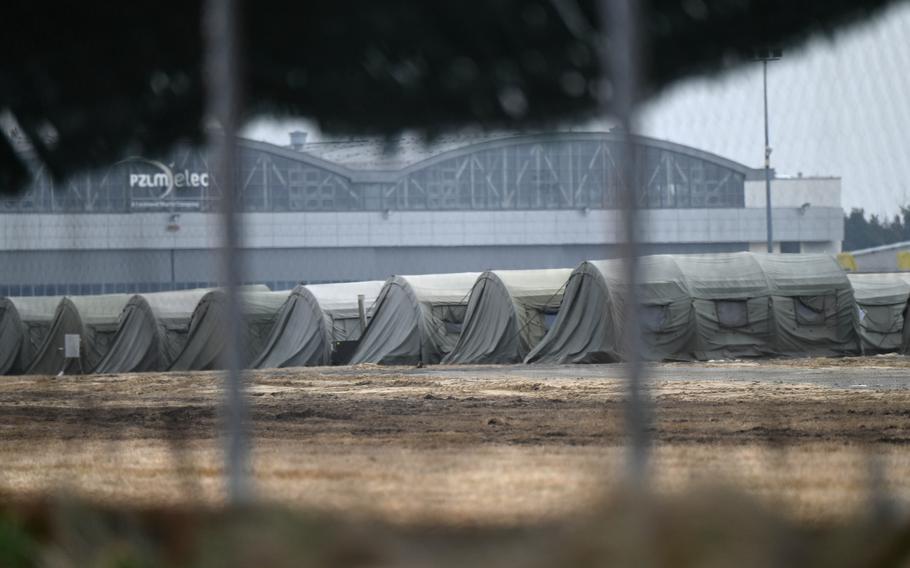 A tarp lining the fence is blown by the wind, revealing a long row of military tents that are set up at an airfield on the outskirts of Mielec, Poland, Feb. 26, 2022. (Michael Abrams/Stars and Stripes)

MIELEC, Poland — Curious Poles continue to stop for a peek at the sprawling airfield here that serves as the main staging area for the 82nd Airborne’s new mission in Poland. But for the most part, soldiers remain out of sight.

And one month into the campaign, that’s just the way the U.S. Army appears to like it.

Chinook helicopters, Black Hawks and rows of tents occupy the ground at the small cargo airport in Mielec. Beyond that, however, there’s virtually nothing else to see.

Likewise at an arena in nearby Rzeszow that has been transformed into a base of operations for the 18th Airborne Corps out of Fort Bragg, N.C. At the entrance, U.S. soldiers shoo away anyone hoping for a look inside the perimeter.

The U.S. military also has declined to provide reporters access to U.S. soldiers carrying out the mission in Poland. 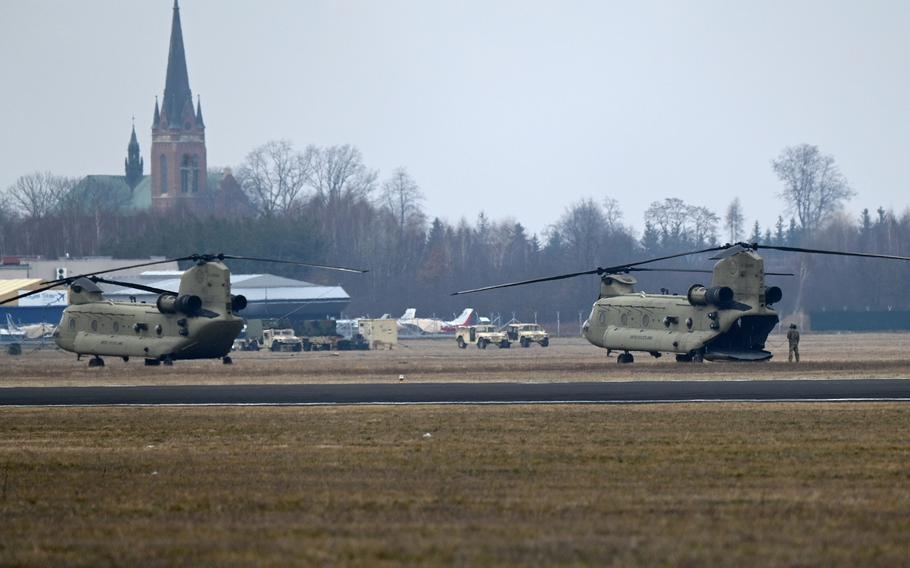 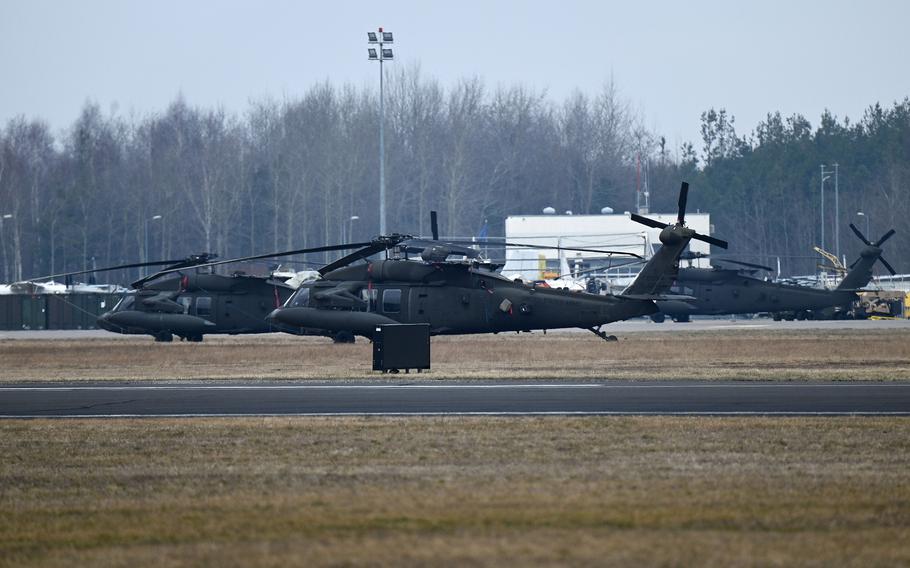 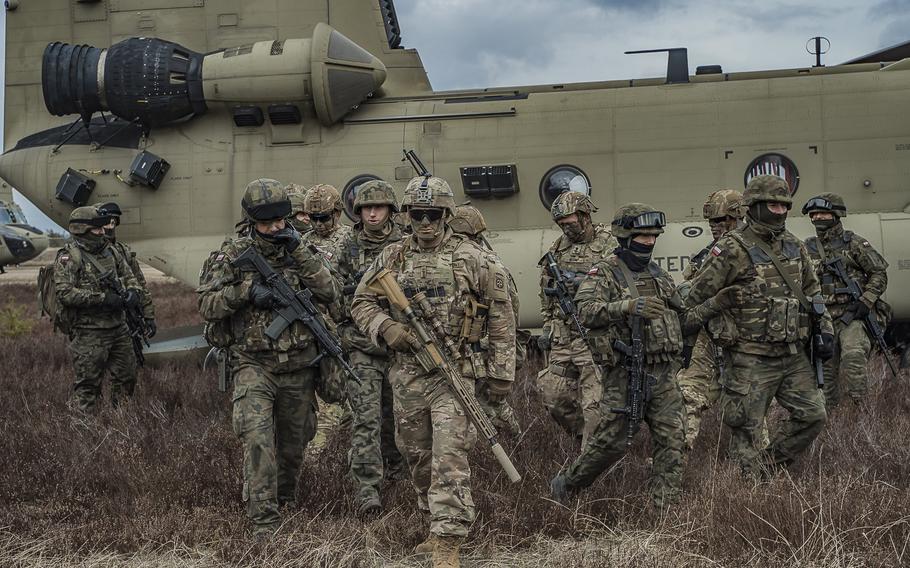 U.S. reinforcements continue to land here and in other parts of Europe as NATO allies beef up their forces in the wake of Russia’s latest unprovoked invasion of Ukraine.

The circumstances that brought the soldiers to Poland are extraordinary: a war on NATO’s border on a scale not seen in Europe since World War II. In a worst-case scenario, their task would be to help mount an allied defense against Russia.

“We seek no conflict. But if conflict comes to us, we are ready for it and we will defend every inch of NATO territory,” U.S. Secretary of State Antony Blinken said Friday at NATO headquarters in Brussels, where allies were meeting for emergency talks.

The 5,000 U.S. soldiers in southeast Poland, most of whom come from the 82nd Airborne Division, are one part of the effort to enhance allied defenses should Russia’s war spread beyond Ukraine’s borders.

They join 4,000 U.S. service members already based in Poland. How long the paratroopers will remain in the country and what comes next for the broader U.S. military mission in Europe aren’t yet clear. 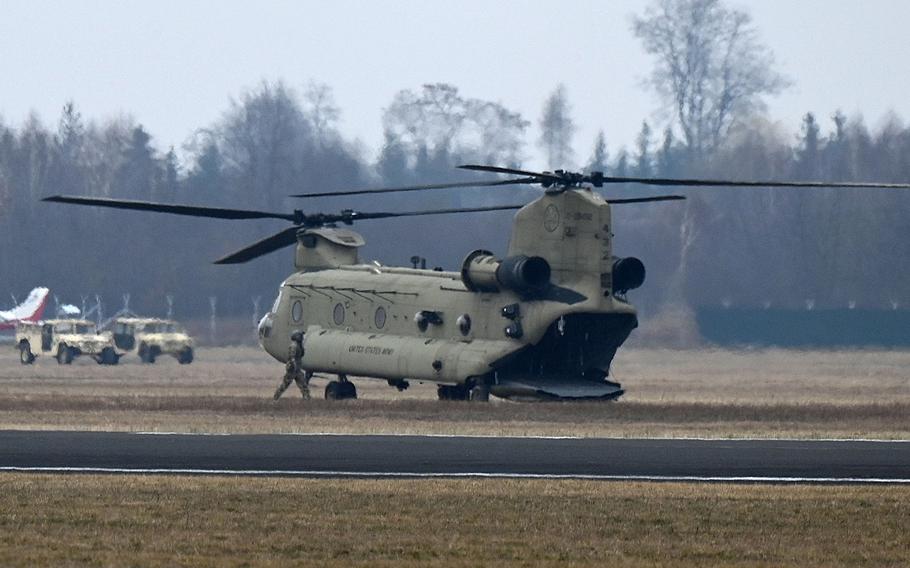 A U.S. Army CH-47 Chinook helicopter sits on an airfield on the outskirts of Mielec, Poland, Feb. 26, 2022. (Michael Abrams/Stars and Stripes) 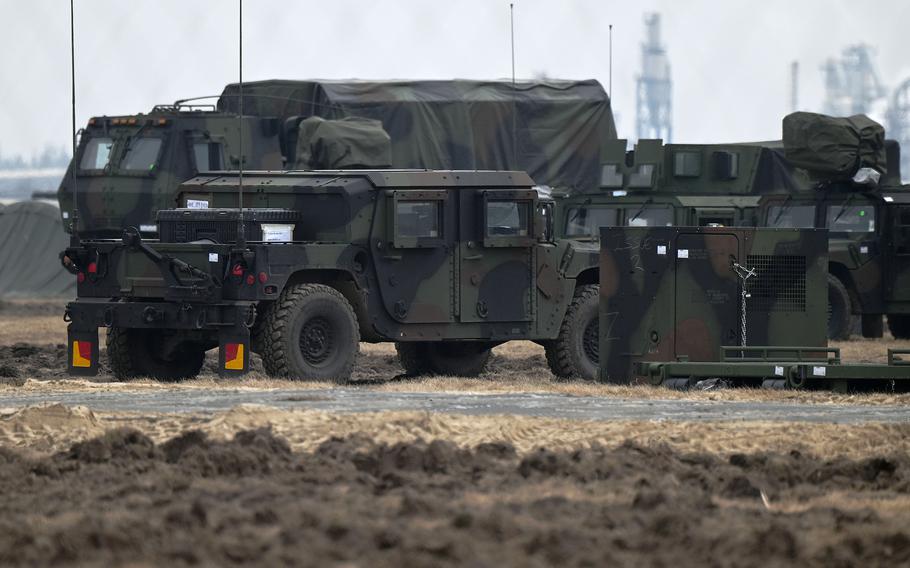 U.S. Army vehicles parked on an airfield on the outskirts of Mielec, Poland, Feb. 26, 2022. (Michael Abrams/Stars and Stripes)

Blinken said Russia’s attack in Ukraine will have implications for a new NATO strategy, which is now being developed and will be finalized at a summit in June.

“We are preparing for NATO’s future, and the events of the last few weeks will further inform that future,” Blinken said.

But for the average U.S. soldier, the mission on the ground in Poland so far seems centered on matters more mundane: train, train, train.

Much of the work by the 82nd Airborne is taking place at a Polish army base in Nowa Deba that is home to Poland’s 18th Mechanized Division. U.S. and Polish forces have been practicing tactics needed in a crisis, such as medical evacuations and helicopter landings.

The paratroopers also are prepared to assist with any evacuation of Americans coming across the Polish-Ukrainian border if the State Department calls on them to do so. But so far, there has been no need for such support, Buccino said.