Among the moves on the table is the creation of a multinational battlegroup to be stationed in the Black Sea region, NATO Secretary-General Jens Stoltenberg said during a stop in Romania, which would be one of the host countries under the proposal.

The meeting comes amid growing concerns about Russia’s military buildup around Ukraine and the potential for a new large-scale war there.

“The number of Russian troops is going up, and the warning time (for an attack) is going down,” Stoltenberg said. 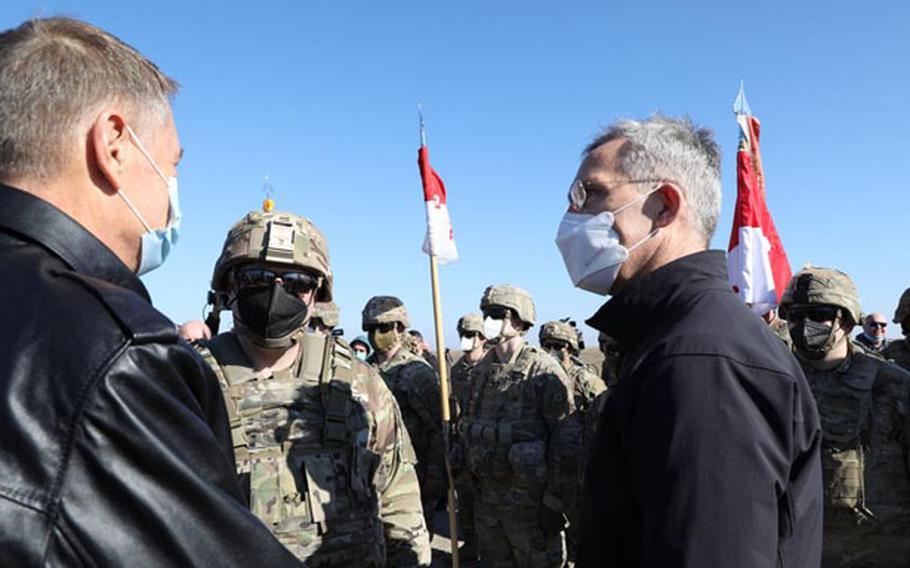 Sgt. Devon Eaker, 1st Battalion, 16th Infantry Regiment, participates in a rescue training mission at Mihail Kogalniceanu Military Base, Romania, Jan. 28, 2022. On Feb. 11, NATO Secretary-General Jens Stoltenberg visited the base and said a proposal has been made to station a NATO battlegroup in Romania. (Joshua Thorne/U.S. Army)

On Friday, Stoltenberg said he had visited with U.S. troops from the Vilseck, Germany-based 2nd Cavalry Regiment who deployed earlier this week to Romania’s Mihail Kogalniceanu military base, which serves as a hub for U.S. forces rotating through the country.

About 1,000 U.S. soldiers have shifted from Germany to Romania as part of an effort to shore up defenses closer to Russia. In all, the U.S. now has close to 2,000 troops in Romania on a rotational basis.

Adding a NATO battlegroup could supplement force strength in southeastern Europe in a way that would be similar to postures in the Baltic states and Poland, Stoltenberg said.

Stoltenberg said France has already volunteered to lead a battlegroup in Romania. He didn’t spell out what other countries could see similar battlegroups, but Bulgaria is one possibility.

A final decision on the size, scope and locations of the new battlegroups is expected to be made in the spring, he said.

“A more consistent presence of U.S. and other allies in the Black Sea region is needed,” Iohannis said.