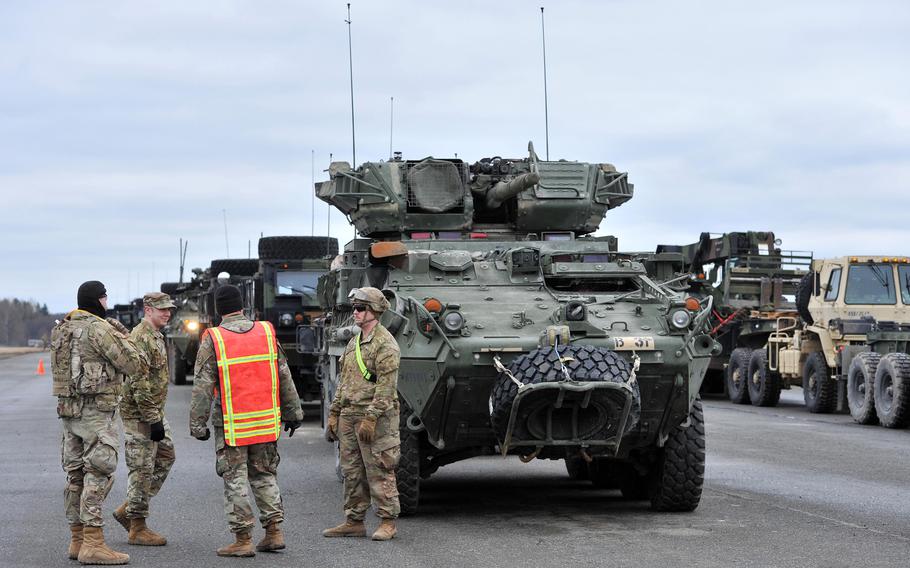 Soldiers of the 2nd Calvary Regiment get their Strykers and other combat support vehicles ready for a deployment to Romania at Vilseck Army Airfield, Germany, Feb. 9, 2022. (Michael Abrams/Stars and Stripes)

VILSECK, Germany — Strykers and combat support vehicles lined up at the Army airfield Wednesday as about 1,000 American troops prepared to head to Romania for an open-ended deployment meant to reassure allies worried about Russia’s military buildup around Ukraine.

The Vilseck-based 2nd Cavalry Regiment soldiers will remain in Romania to shore up NATO’s eastern flank as long as the mission requires, said Col. Joe Ewers, the regiment’s commander.

“We will assure our allies, deter our adversaries and stand ready to defend our alliance,” Ewers said.

The first soldiers from Vilseck have already arrived in Romania, Ewers said, and the rest of the contingent is expected to be there in the coming days.

Russia has moved an estimated 130,000 troops and an assortment of advanced weaponry near Ukraine’s borders in the north, east and south. It is also conducting naval exercises in the Black Sea, which borders Ukraine.

Ukraine announced its own series of military drills beginning Thursday. 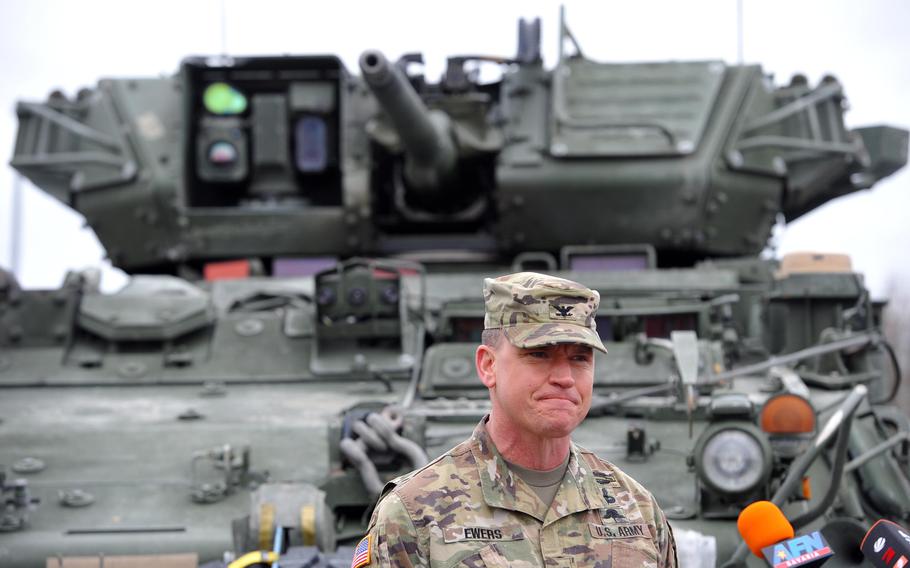 Col. Joe Ewers, commander of the 2nd Calvary Regiment talks to the media at Vilseck Army Airfield, Germany, as his troops prepare to deploy to Romania, Feb. 9, 2022. About 1,000 soldiers are being sent to Romania to reassure allies worried about Russia. (Michael Abrams/Stars and Stripes) 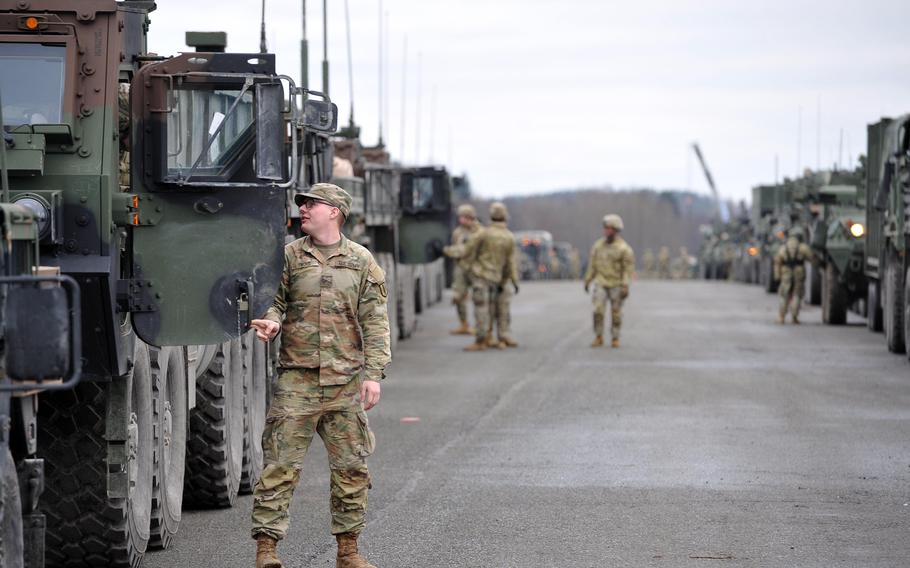 Soldiers of the 2nd Calvary prepare their vehicles for a deployment to Romania Feb. 9, 2022, at Vilseck Army Airfield, Germany. About 1,000 soldiers are being sent to reassure allies worried about Russia. (Michael Abrams/Stars and Stripes)

In all, 3,000 U.S. troops are being repositioned at the order of President Joe Biden in response to the Kremlin’s buildup.

The Pentagon has sent 1,700 soldiers from the 82nd Airborne to Poland to reinforce defenses. An additional 300 soldiers from Fort Bragg, N.C., have set up a headquarters task force in Germany to coordinate the paratroopers’ mission.

Although the security landscape in Europe has changed given events in and around Ukraine, the regiment’s mission in Romania is expected to resemble familiar exercises along NATO’s eastern flank, Ewers said.

“This type of mission is not new or different for the 2nd Cavalry Regiment,” he said.

However, rank-and-file troops were not authorized to discuss their new mission. That was left to Ewers, the unit’s top officer.

Ewers said the 1,000 soldiers will operate from various military sites around Romania as they train with allies. The regiment will engage in “tough, realistic training,” he said.

The Stryker squadron being sent to Romania consists of lightly armored, medium-weight combat vehicles designed to be deployed on short notice and provide a flexible mobile anti-tank formation. 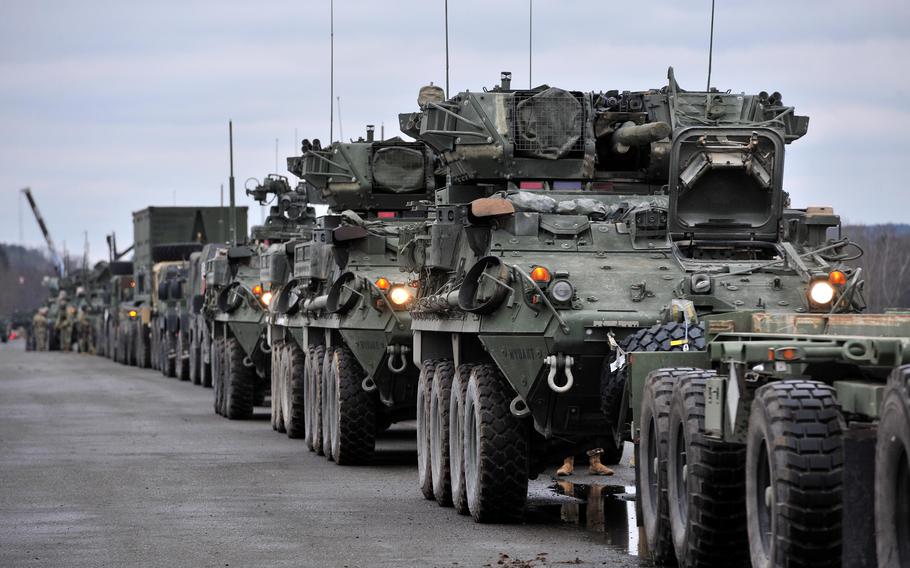 Strykers and other combat support vehicles of the 2nd Calvary Regiment stand on Vilseck Army Airfield, Germany, Feb. 9, 2022, as they are prepared to be shipped to Romania. (Michael Abrams/Stars and Stripes) 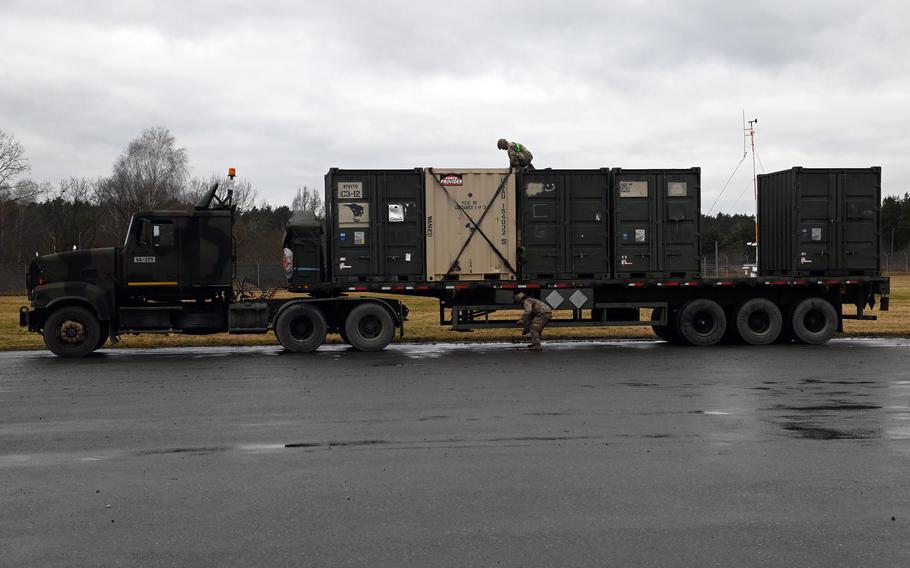 Soldiers secure cargo to a truck at Vilseck Army Airfield, Germany, Feb. 9, 2022, as the 2nd Calvary Regiment prepares to deploy to Romania. (Michael Abrams/Stars and Stripes)

In Romania, the U.S. already has 900 troops carrying out a wide range of missions. Much of their activity is centered on Mihail Kogalniceanu Air Base, which hosts elements of the 1st Air Cavalry Brigade and the 1st Infantry Division’s 1st Armored Brigade Combat Team.

The air base will likely be an initial staging area for the incoming 2nd Cavalry Regiment.

Military officials have emphasized that the forces being sent to Romania and Poland are tasked with reassuring allies worried about potential Russian aggression.

But while tensions have escalated between Russia and the West, Moscow has shown no indication that it intends to attack any NATO member country.