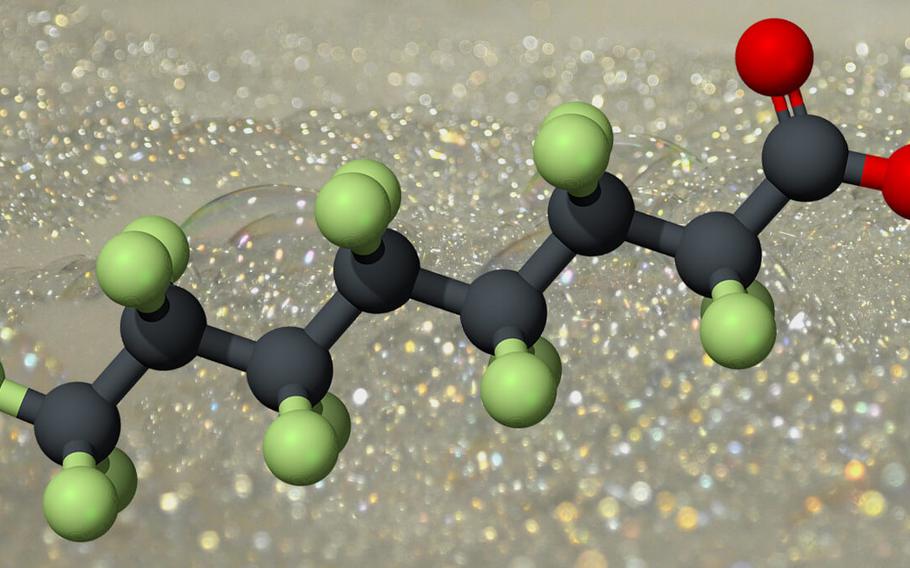 A 3-D model of the PFAS molecule. A manmade chemical, PFAS, and its components PFOS and PFOA, are found in firefighting foam, also known as aqueous film forming foam, or AFFF, on some U.S. military bases in Japan. (Xavier Navarro/U.S. Air Force)

Levels of toxic “forever chemicals” in treated industrial wastewater at Misawa Air Base had significantly fallen six months after an inadvertent leak of residual firefighting foam at an aircraft shelter, according to a Japanese defense official and a base spokesman.

A manmade chemical, PFAS, and its components PFOS and PFOA, are found in firefighting foam, also known as aqueous film forming foam, or AFFF, on some U.S. military bases in Japan. Japanese authorities in recent years have tracked similar spills at U.S. bases on Okinawa and in the Tokyo metro area.

A frozen pipe in a hardened aircraft shelter at Misawa in northeastern Japan cracked Jan. 3 and released water through a fire suppression system where the foam was previously kept, base spokesman Lt. Col. Cody Chiles told Stars and Stripes by phone Thursday. Misawa is home to the 35th Fighter Wing.

“We stopped the outflow of water until we understood exactly what happened,” he said. “I think our teams did a good job of catching it.”

The Air Force in early January sampled the treatment plant and found 947 nanograms per liter of PFAS chemicals at the intake and 2,079 nanograms per liter at the exit, a spokeswoman for the Tohoku Defense Bureau, a local arm of the Ministry of Defense, told Stars and Stripes by phone Thursday. She did not specify which chemicals were detected.

Water entering the wastewater treatment plant in June still showed a comparatively high 1,125 nanograms per liter, or 1.125 ppb, according to results the bureau spokeswoman shared by phone.

Because PFOA and PFOS persist in the environment, the Environmental Protection Agency refers to them as “forever chemicals.” They are commonly used for a variety of applications, from nonstick cookware to aircraft grease. Studies show an increased risk of cancer and other adverse health effects from exposure to these substances, according to the EPA. A major U.S. manufacturer, 3M, on Dec. 20 announced it will stop its use of PFAS by the end of 2025.

The defense bureau after reviewing the June results from Misawa required no further measures of the Air Force, she said. The Defense Ministry continues to urge the Air Force to “take thorough preventative measures and safety maintenance,” she said.

The Japanese government relayed the June test results to local governments on Nov. 18, she said.

The contaminated water did not reach the drinking water supply on base, Chiles said. Misawa city on Jan. 21 said it sampled potential sources of its drinking water, such as lakes Anenuma and Ogawara, and found them below U.S. and Japanese recommended limits for PFAS, Chiles said by email Thursday.

“The 35th [Civil Engineer Squadron] regularly tests the drinking water to make sure it’s safe for our community,” he said by phone. “I drink the water on base every day.”

The air base in January quickly notified Japanese authorities of the spill, shut down the treatment plant and found a contractor to remove the contaminated wastewater, Chiles said. The fire suppression systems that once held firefighting foam “were isolated and contained to prevent any future accidental discharge.”

Chiles said the base in conjunction with the Japanese government started sampling the water at the plant and the nearby pond.

“We’ve been working with them since the incident occurred,” he said by phone.

A similar incident occurred at Naval Air Facility Atsugi in September when a control panel malfunction in a hangar caused a release of firefighting foam into a nearby stream during a heavy rain. Japanese officials on Dec. 19 sampled the water treatment facility at the base 26 miles southwest of Tokyo for traces of PFAS chemicals.

On Dec. 15, officials with the national and Yokosuka city government reviewed recent test results at Yokosuka Naval Base, which discovered high levels of PFOA in its industrial wastewater in May. The base, 33 miles south of Tokyo, after the May results removed its firefighting foam and installed a carbon filter at the treatment plant.