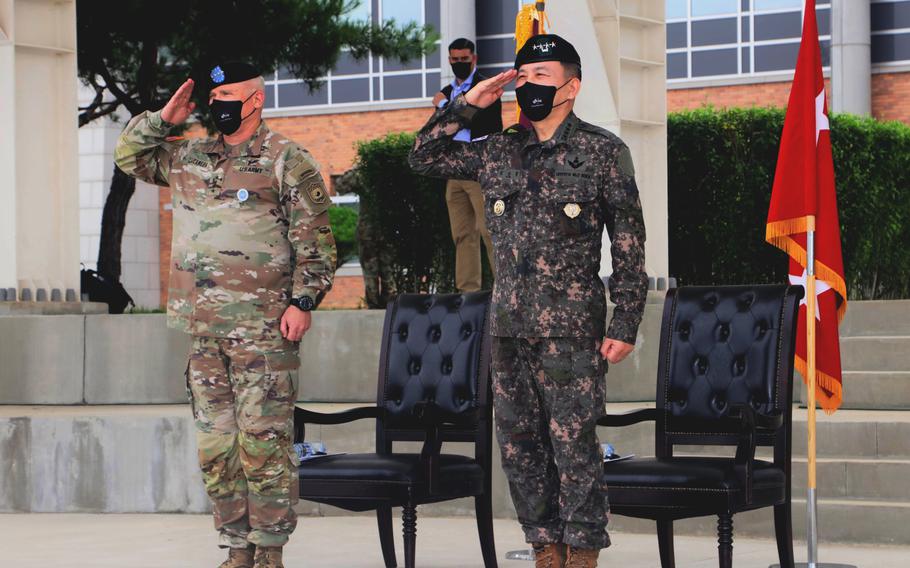 In a speech during a ceremony at Barker Field, LaCamera described Kim as “smart, cordial and physically tough.”

Kim described the welcome as a great honor and referred to increasing tensions on the Korean Peninsula fueled by North Korea’s record-breaking run of missile tests, 17 rounds so far this year.

“The security situation around the Korean Peninsula recently is grave,” Kim said. North Korea “continues to refine its nuclear and missile capabilities, thereby posing a significant threat to the regional security order.”

Despite that threat, South Korea holds “the most powerful key,” he said. “And that key is none other than our steadfast [U.S.-South Korea] alliance.”

That alliance is a “blood bond forged in the crucible of war,” Kim told an audience of about 100 South Korean and U.S. military leaders and guests.

South Korea, which has military conscription, has about 625,000 service members on active duty and about 3 million in reserve, according to a U.S. Defense Department report in 2017. USFK has about 28,500 troops on the peninsula.

Military relations between the U.S. and South Korea are pivotal to deterring regional threats, LaCamera said during his address.

“War is a brutal business — we cannot afford to forget our profession’s grim realities,” he said. “We all hope that doesn’t happen, but we must continue to train and be ready.”

Since 2015, the U.S. 2nd Infantry Division has combined U.S. and South Korea troops, the first formation of combined forces at that scale in the U.S. Army, according to its commander at the time, Maj. Gen. Thomas S. Vandal.

“True to his character, I know Gen. Kim will continue to give 100% and then some,” LaCamera said Tuesday. “That’s another reason why the [South Korea]-U.S. alliance can rely on his dedication of taking care of the sons and daughters entrusted to us.”

Yoon, a member of the conservative People Power Party, took office in May. He campaigned on closer ties to the U.S. and a firmer response to North Korean weapons tests. Meeting with top South Korean military officials on July 6, Yoon vowed to “punish North Korea swiftly and adamantly” if the regime chose to destabilize the region.