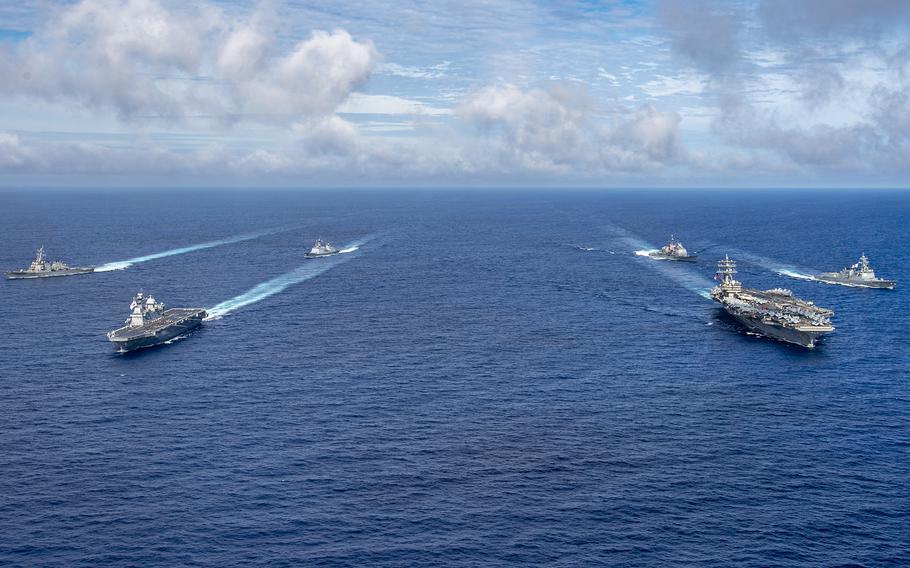 CAMP HUMPHREYS, South Korea — The U.S., South Korea and Japan are rehearsing their ballistic missile defense this summer following a record number of demonstrations by North Korea this year of its missile capability.

Moon did not specify the dates for the missile drill, but South Korean news agencies reported Wednesday it would be held in August.

The biennial Rim of the Pacific exercise, or RIMPAC, is scheduled to be held in Hawaii and California and off their coasts June 29 to Aug. 4.

The “growing nuclear and missile threats” from North Korea require the three-nation defense drill, Moon said. North Korea conducted an annual record of 17 rounds of missile tests so far this year, including its most recent launch of eight short-range missiles on June 5.

Navies from the three partners conducted similar drills in 2016 when their warships tested their Aegis Ballistic Missile Defense Systems off Hawaii’s coast.

U.S. and South Korean officials warned in recent weeks that the communist North is preparing an imminent nuclear test.

Such a test “will be met with a united and firm response from our alliance and the international community,” South Korean Foreign Minister Park Jin said during a press conference with Secretary of State Antony Blinken on Tuesday.

Blinken urged North Korea to “engage in serious and sustained diplomacy” and said the U.S. was still willing to negotiate with North Korean leader Kim Jong Un without preconditions.

“I can say simply … that we’re preparing for all contingencies, again in very close coordination with others, notably with [South Korea] and with Japan,” Blinken said during the press conference. “And we are prepared to make both short and longer-term adjustments to our military posture, as appropriate.”