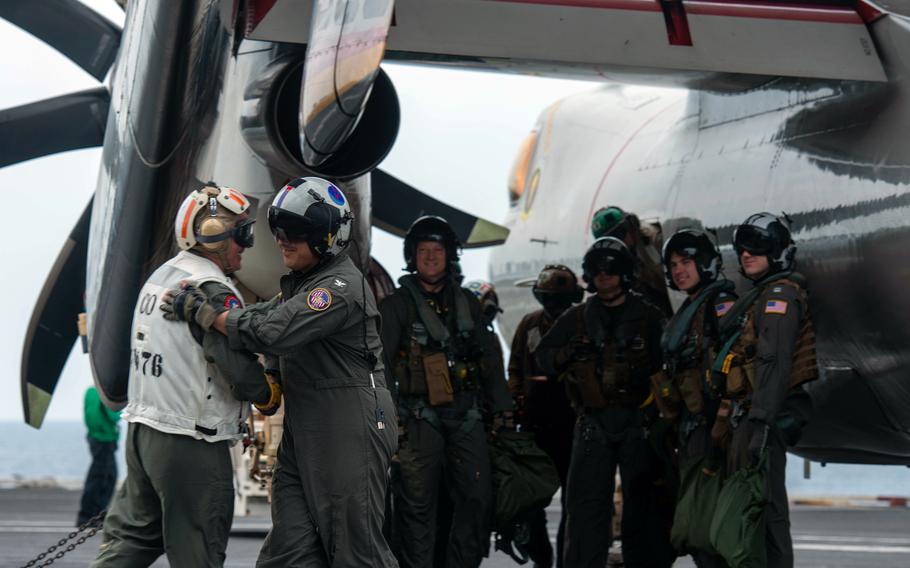 Command of the USS Ronald Reagan changed hands Friday in waters east of the Korean Peninsula, where the aircraft carrier recently redeployed in response to an uptick in North Korean missile launches.

Capt. Daryle Cardone, of Nanticoke, Pa., took command from Capt. Fred Goldhammer, of New York, N.Y., during a ceremony inside one of the ship’s cavernous hangar bays, according to a news release from U.S. 7th Fleet.

The carrier’s schedule was altered Tuesday after North Korea launched an intermediate-range ballistic missile over Japan for the first time since 2017.

The 7th Fleet’s commander, Vice Adm. Karl Thomas, alluded to the about-face in a speech during Friday’s ceremony.

“Not only do we ask you to be ready at a moment’s notice, we often must change the plan, just like we did a few days ago when you sailed back into the Sea of Japan,” he said, according to the release. “That’s what makes these magnificent ships such a flexible and powerful deterrent - you adapt to world events.”

The Sea of Japan is known in Korea as the East Sea.

The nuclear-powered carrier and its strike group initially made a port call in and around Busan, South Korea, on Sept. 23, ahead of a four-day exercise with South Korean and Japanese warships aimed at preparing for “North Korean provocations,” according to the South’s Ministry of National Defense.

The strike group returned to the area on Wednesday to respond to the “highly unusual” timing of the North’s launches, the South’s Joint Chiefs of Staff said in a news release the same day.

On Thursday, ships from the strike group, including the guided-missile cruiser USS Chancellorsville and guided-missile destroyer USS Benfold, took park in a trilateral missile-defense exercise with South Korean and Japanese forces.

Those drills happened the same day Pyongyang fired two short-range ballistic missiles in the sea off its eastern coast.

During Friday’s ceremony, Goldhammer lauded the crew for its ability to adapt to such situations.

“The dedication and hard work of the 5,000 sailors onboard this ship and their families ultimately drive the combat readiness of our ship-air wing team, as we very effectively demonstrate our nation’s unflinching commitment to peace and stability in this region,” he said in the 7th Fleet release. “The team will be in excellent hands under the leadership of Capt. Cardone.”

After taking command of the Ronald Reagan in October 2020, Goldhammer faced significant challenges as the coronavirus pandemic raged on. Two months later, about 350 of his sailors were quarantined in Yokosuka after coming into close contact with others who tested positive for COVID-19.

As pandemic restrictions waned, the Ronald Reagan went on to participate in numerous military exercises. During its 2021 summer deployment, the carrier diverted to the Arabian Sea for three months to support the U.S. withdrawal from Afghanistan.

Goldhammer’s time also saw an increase in tensions between China and the U.S., leading to numerous exercises and other operations in the South China Sea.

His next assignment is with the Office of the Chief of Naval Operations’ Director of Air Warfare staff, Ronald Reagan spokesman Lt. Cmdr. Phillip Chitty told Stars and Stripes on Friday.

While Cardone is new to Ronald Reagan, he has a long history with Goldhammer. The two started out serving together in Airborne Early Warning Squadron 125, now known as Airborne Command and Control 125.

“I am honored to take the helm of USS Ronald Reagan from my former squadron mate and longtime friend,” Cardone said, according to the release. “This crew will continue to build and demonstrate credible combat power, and we will continue to strengthen our regional alliances and partnerships as we further integrate with partner forces.”

Cardone comes to the Ronald Reagan after commanding the blue crew of the USS Lewis B. Puller, an expeditionary sea base, Chitty said. He previously served aboard the carriers USS Dwight D. Eisenhower, USS George Washington and USS John F. Kennedy, according to his Navy biography.

This story has been updated to correct the rank of the 7th Fleet commander. Karl Thomas is a vice admiral.