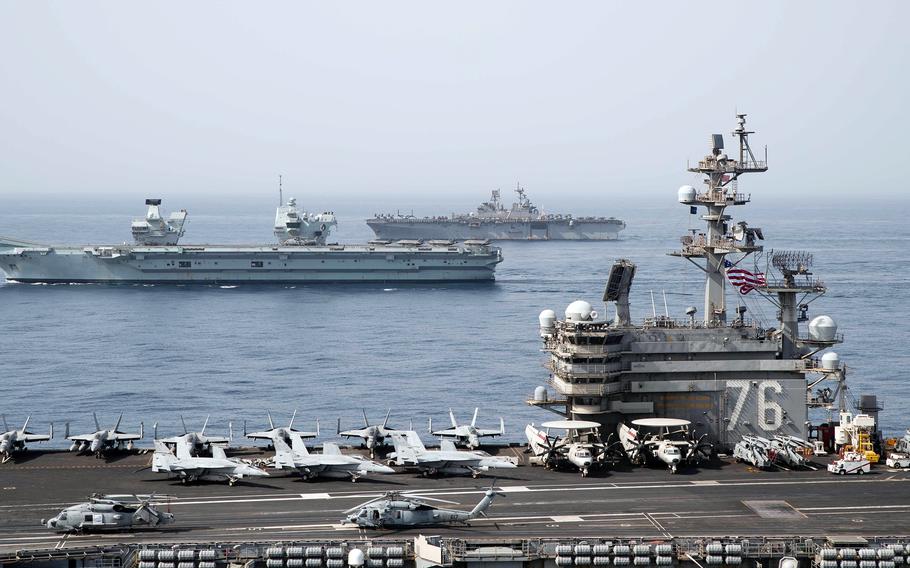 The USS Ronald Reagan and the HMS Queen Elizabeth strike groups conducted a large-scale exercise in the Indian Ocean on Monday, marking the first time the two carriers have trained together.

Along with the amphibious ready group led by the amphibious assault ship USS Iwo Jima and the Dutch frigate HNLMS Eversten, the strike groups worked through a variety of training scenarios in the Gulf of Aden, between Yemen, Somaliland and Somalia.

"Our team was proud to operate alongside the UK Carrier Strike Group during this unique opportunity to hone the full scope of our mutual capabilities," said Rear Adm. Will Pennington, commander of the Ronald Reagan Carrier Strike Group and Task Force 50, in a press release Tuesday. "By operating together at sea, we deepen our coalition partnerships and extend our global reach throughout the region's critical waterways."

The exercise focused on the “full spectrum of maritime warfare operations” including anti-air, anti-surface and anti-submarine warfare tactics. 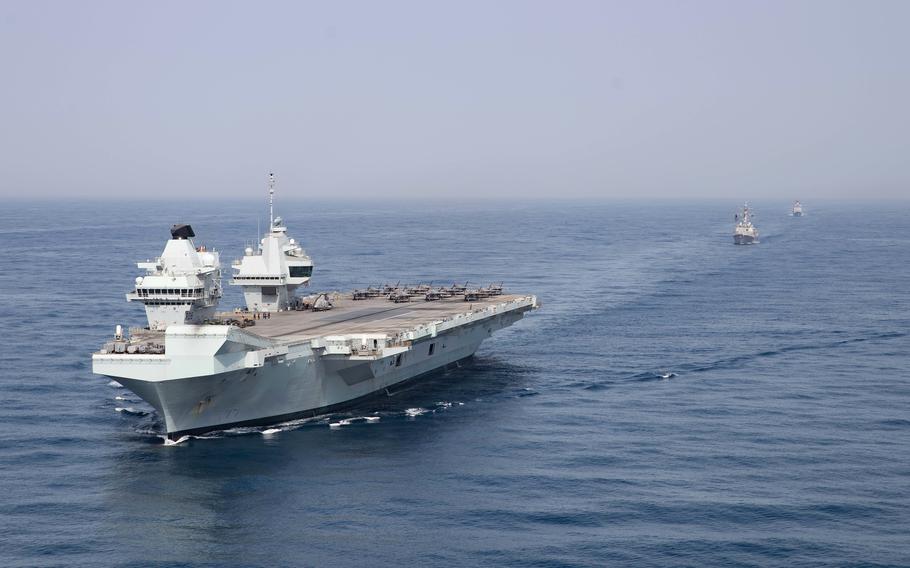 Lt. Cmdr. Joe Kelly, spokesman for Task Force 50, said in an email Tuesday that the exercise was the first time the Ronald Reagan and Queen Elizabeth had steamed together.

“The aircraft carrier is the ultimate expression of global maritime power,” said Commodore Steve Moorhouse, commander of the United Kingdom Carrier Strike Group, in a Royal Navy press release. “Queen Elizabeth, Ronald Reagan and Iwo Jima symbolize the might of the U.S. and U.K. partnership, and the ease with which our naval and air forces can combine here in the Gulf of Aden, or anywhere else in the world.”

The Iwo Jima Amphibious Ready Group trained in May with the Queen Elizabeth and its strike group conducted off the coast of Scotland.

Monday’s exercise took place during the Ronald Reagan’s deployment to the Middle East, where it has been assisting the withdrawal of U.S. troops from Afghanistan.

The HMS Queen Elizabeth, on the other hand, is in the middle of its maiden operational tour. The carrier departed Portsmouth, England, in late May. It is expected to visit 40 nations – including India, Japan, South Korea and Singapore – in a deployment spanning 26,000 nautical miles in seven-and-a-half-months.

On Monday, the Queen Elizabeth’s official Twitter page posted a picture of the carrier sailing with the Japan Maritime Self-Defense Force.

“Good to sail with the Japanese destroyer Setogiri in the Gulf of Aden,” said the post. “We will see more of the Japan Maritime Self Defence Force as we continue to head East into the Indo-Pacific.”