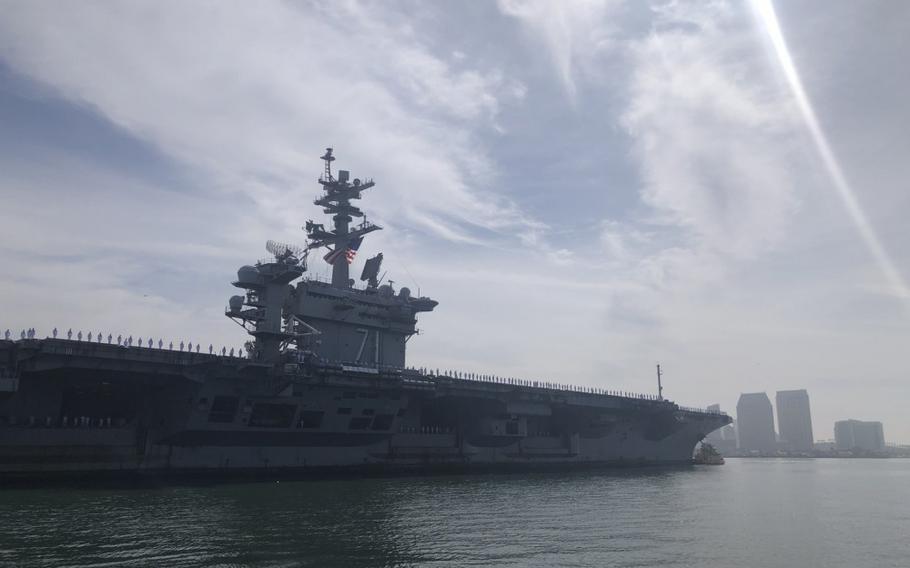 The San Diego-based aircraft carrier Theodore Roosevelt will leave San Diego on Friday to transfer its home port to Bremerton, Wash., where it will undergo maintenance and a retrofit that will enable the ship to operate with the F-35, the Navy announced.

The ship will be in the maintenance yards for 16-18 months, said Steven Fiebing, a Naval Air Forces spokesman in San Diego. About 3,000 sailors and their families are expected to make the move to Washington, the Navy said in a statement.

The Theodore Roosevelt will be the last of the three carriers currently based in San Diego to field the F-35C version of the fighter; Carl Vinson is currently undergoing pre-deployment workups ahead of what will be the first-ever carrier deployment of the jets. In the coming months the Lincoln will also deploy in what will be a first for Marine Corps F-35Cs, Fiebing said.

The F-35C is the third and final variant of the Pentagon's trillion-dollar Joint Strike Fighter to reach the operational milestone of deployment. The largest of the three aircraft types, the "A" variant, is flown in the U.S. by the Air Force. The "B" variant, a short-takeoff and vertical-landing capable aircraft, has been flown by the Marine Corps since 2018 and operates from Navy amphibious ships.

The "C" is flown by both the Navy and Marine Corps and is designed to operate as part of a Navy carrier air wing. It has a larger wingspan and longer range to meet the demands of carrier operations.

Nimitz-class carriers, Harrell said, need to have stronger deflectors installed on their flight decks to handle the jet blast of the F-35C's single engine. Some interior spaces on the ships also have to be refurbished for F-35 missions.

However, it isn't just material upgrades the ships needed to deploy with the next-generation fighter, Harrell said. They also have to integrate another aircraft into the wing — the CMV-22B Osprey.

"Any carrier with F-35s will need a CMV squadron," Harrell said. "You need the Osprey to carry the (F-35) engine module."

Those modules, Harrell said, are too large for the Navy's MH-60 helicopters and C-2 Greyhound aircraft, which normally carry replacement parts, to carry.

All of the Navy's current Osprey squadrons operate out of Naval Air Station North Island since only West Coast carriers are currently configured to deploy with F-35s.

The stealthy F-35 brings new capabilities to the air wings, according to pilots who've flown them. Advanced sensors, communications and touch-screen cockpit controls makes the jets easy to fly, a Marine Corps pilot told the Union-Tribune last year. This allows pilots to focus on their missions.

The fighters are the most expensive weapons system ever fielded by the Pentagon and are expected to cost more than $1 trillion to operate and maintain over their lifetime.

One F-35C squadron will integrate into each of the two air wings, Harrell said.

In addition to the F-35 retrofit, the Navy said, the Roosevelt will also receive upgrades to its self-defense system, its 25 mm machine gun and its computer network.

Maintenance crews will also work on the ship's hull, rudder, propulsion shaft and anchor while the ship is in drydock at the Puget Sound Naval Shipyard.

Nimitz-class nuclear aircraft carriers have service lives of 50 years but require frequent maintenance and technological upgrades, including a one-time, multi-year midlife refueling that is done on the East Coast. Some maintenance is routinely performed pier-side in San Diego, but more involved maintenance necessitates occasional work in Bremerton.

The Puget Sound Naval Shipyard has the only dry dock on the West Coast large enough for Nimitz-class carriers.

Because of these maintenance requirements, the Navy frequently relocates its carriers.

Fiebing said Navy leaders have not decided whether the Roosevelt will return to San Diego after its time in the yards. The last San Diego-based carrier to transfer homeports from San Diego to Bremerton — the Carl Vinson, which left in January 2019 — returned in September after more than a year and a half of maintenance in Washington.

The Abraham Lincoln arrived in San Diego in January 2020 after a 10-month round-the-world deployment following its midlife refueling and maintenance in Norfolk, Va.

The carriers are an economic boon for the region. According to the 2020 San Diego Military Economic Impact Report from UC San Diego and the San Diego Military Advisory Council, the three carriers each contribute $767 million to the area economy per year. The report indicated that military spending in San Diego softened the economic impact of the pandemic in 2020.

For the Theodore Roosevelt, the move north comes after a tumultuous 18 months for the ship and its crew.

After leaving San Diego in January 2020 for a routine deployment, the crew found itself at the forefront of the coronavirus pandemic when several sailors came down with the virus after a port call in Vietnam. Sidelined for month in Guam, the virus would eventually infect a third of the crew.

The ship's captain at the time, Capt. Brett Crozier, was fired by then-acting Navy secretary Thomas Modly after a letter from Crozier critical of how the Pacific Fleet was handling the outbreak was leaked to the media. Modly himself then resigned after making disparaging comments about Crozier to the crew days after the firing.

A 41-year-old chief petty officer died from the virus.

The ship returned to San Diego last summer but quickly began preparing for yet another deployment. Sailors began a mandatory pre-deployment quarantine in November and left San Diego Dec. 7, meaning they were away from their families over the Thanksgiving and December holidays. During its second deployment in a year, the ship did not visit any ports.

The Roosevelt returned to San Diego in May.